Here are some highlights of what I learned from a number of the n-scale model train manufacturers at this weekendâs Amherst Railway Society Railroad Hobby Show, West Springfield, MA (January 27 & 28, 2018).

And lots of it is good news for n-scalers: many manufacturers will continue to embrace the âprototypically correctâ movement currently underway in the world of n-scale. They will continue to produce models that sport metal wheels, body-mounted couplers, refined detailing (see-through walk ways, separately applied brake wheels, etc.) and manufacture factory-equipped DCC and sound enabled locos.

Athearn
Craig Walker, product development supervisor for Athearn, showed me some unpainted samples of their previously-announced ACF 4600 cf centerflow 3-bay covered hopper, which is expected to be released in late 2018. According to Walker, there was some kind of glitch in the HO model, which resulted in a delay in the production of the n-scale model.

Walker also showed me the recently released TankTrain. These tank cars (seen on the west and east coast) are connected via a flexible hose and the idea is instead of filling/emptying one tank car at a time, you can use this hose system to empty and fill them more efficiently and in less time. The detailing (especially the railings and connecting hoses) on this was quite impressive.

(George Michaels wrote a review of these TankTrains.)

Bottom view of the TankTrain; note the body-mounted couplers

On the horizon: According to Walker, he will be looking at whatâs been produced in H scale and see if thereâs a hole in n-scale for that same model and move forward with more n-scale products . . . .all good news for n-scalers.

Atlas
At the Atlas booth, I chatted with Jared Haedrich, COO of Atlas. I saw an unpainted sample model of the SD60E Loco, a completely new tooling announced earlier this month. 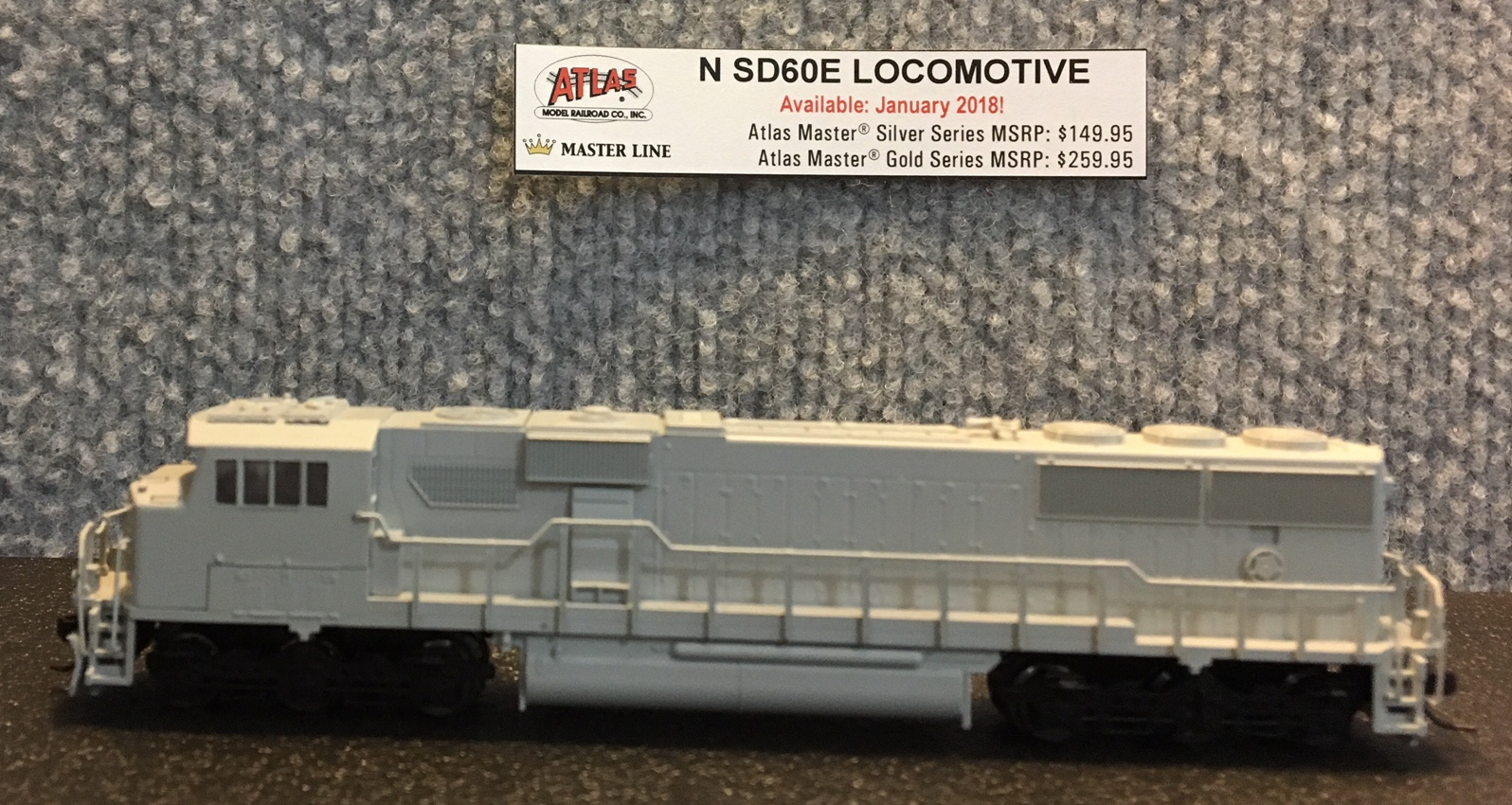 Haedrich also showed me unpainted samples of the multi-level commuter cars (a NJ Transit/AMT (AMT is the Montreal equivalent to NJ transit, transporting commuters from the suburbs of Montreal to Montreal proper) along with the N ALP 45DP loco that pulls these cars. This is the first show to showcase these models. They run diesel outside of the city and electric when in city limits.

Bachmann
Jack Lynch, general manager, special products, Bachmann, showed me several models of to-be-released items. I saw the GP40, complete with DCC sound and a new body shell, which will ship in the spring of 2018. Bachmann, similar to other vendors, is striving to offer products with more refined detailing and DCC functionality (factory-installed) and decided to upgrade its antiquated tooling for this body style that had 1970s detail level and produce this new engine. 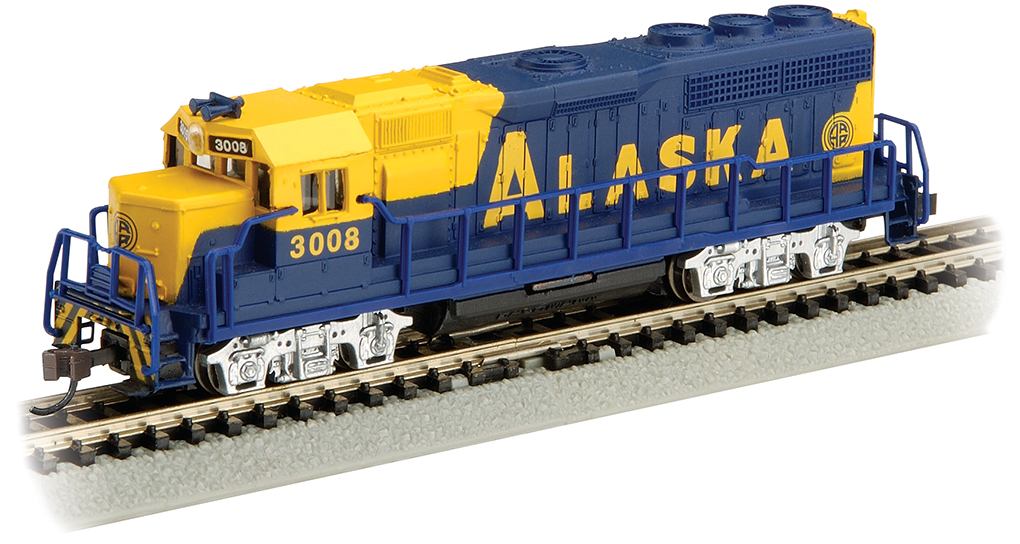 I was also able to see a production sample of a completely new tooling from Bachmann, the SD9 loco, DCC-sound equipped, with 5 road names and expected to be released the summer of 2018. I also saw models of a re-release of Bachmannâs Dash 8 diesel engine. This will be re-done with DCC-sound. Lynch also showed me some newly released ore cars. (George Michaels wrote a review of this ore car.)

Bowser
At the Bowser booth, I saw a handful of 2 body styles with new paint schemes: the cylindrical 3-bay covered hoppers and the GLa 2-bay open hoppers (made by the Pennsy). These will be shipping to stores soon (they are held up in Los Angeles due to busy port traffic). The Maypo (a chocolate-flavored breakfast cereal) cylindrical 3-bay covered hoppers caught my eye . . . maybe because it was close to lunch time!

Bowser has no plans to do any new n-scale toolings soon.

Eastern Seaboard Models showcased their recently released X-65 box car, which is now shipping and Bryan Bussey chatted with me about their latest announcement, the U.S. Equipment Corp X72 Boxcar, which is based on the X58 floor and underframe. This item is due out in January 2019.

Exact Rail assured me that they havenât dropped their n-scale line of products even though they have not released anything for this scale in some time. They do expect to announce (at the NSE convention in Salt Lake City, Utah) a new tooling for a freight car. No details were given on this item. Similar to other companies, re-toolings going forward will have body-mounted couplers only.

He expects to announce a new tooling at the National NSE convention this summer.

InterMountain
Doug Dolloff, senior vice president, InterMountain showed me unpainted production samples of their previously-announced superdome passenger cars, due out summer 2018. One engine the EMD F-Unit, which was announced more than 3 years ago, is expected to be out this summer. It been delayed because InterMountain was waiting on an ESU sound board before it could modify its tooling for this loco. 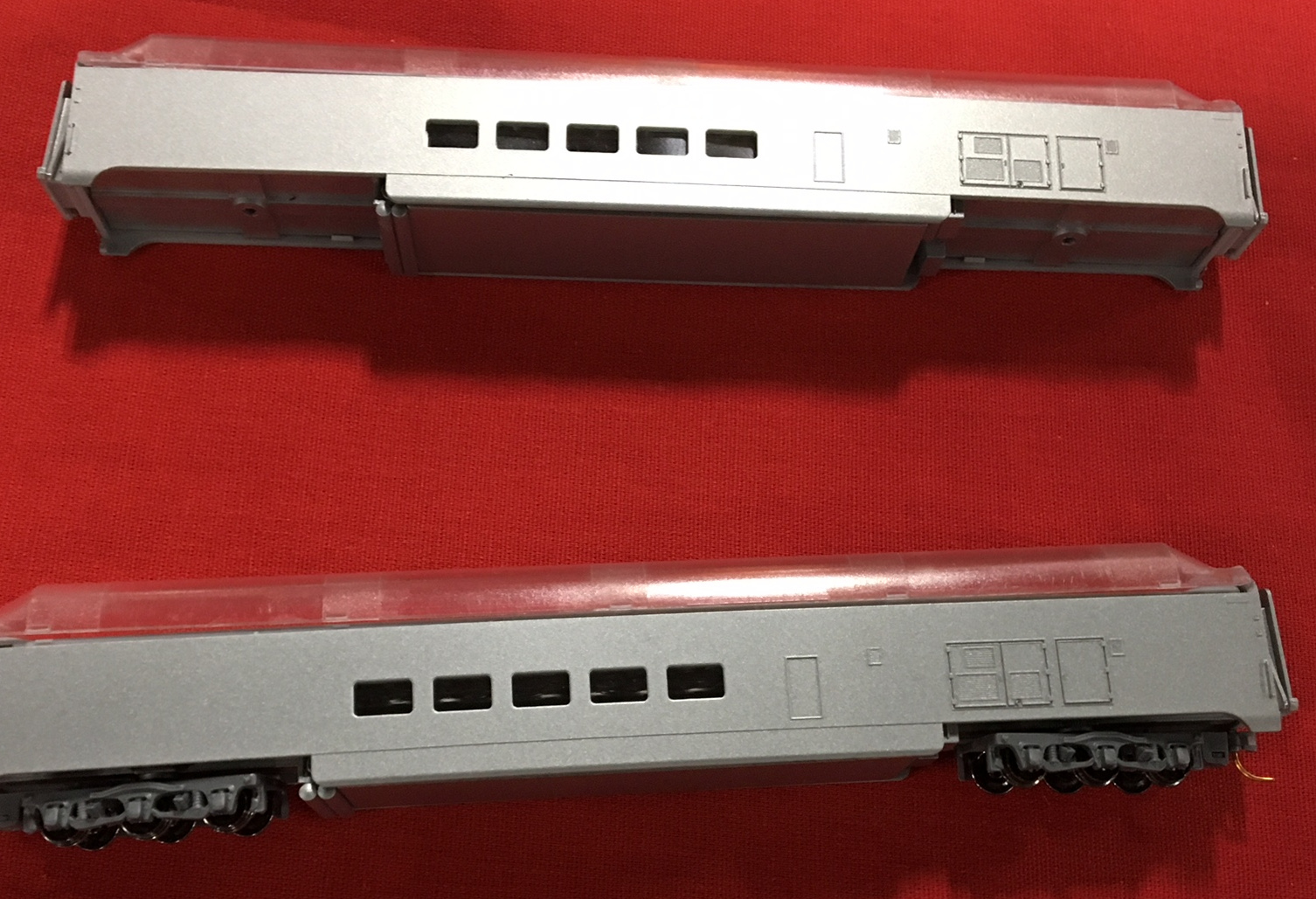 EMD F-Unit with long-awaited sound board from ESU

Kato announced that it will create a new Spirit of Union Pacific 1843 loco (a tribute to military veterans) by modifying an old tooling (SD70 ACe). This model, like its prototype, will reflect modifications that qualify it to have Tier 4 credit ratings (lower pollution emissions). Road numbers and other details were not available although one feature we could expect is a separated cab, according to Alex Kovach of Kato. And we can also expect the traditional Union Pacific paint schemes. This item is expect to be released the 2nd half of 2018.

MicroTrains
Eric Smith, president of MicroTrains talked to me about some of the already-announced releases, such as the DODX 68â FGE Heavy-Duty Flat Car with M-1 Abrams Tank Loads (which he expects to be released by the National N-Scale Enthusiast convention in Salt Lake City, Utah this June). He noted that the tanks (which will be available as stand-alone items) on these military trains are made using injection molded tooling (versus resin and white metal used in the past), which allows for more detail and uniformity in size. He noted that military items are very popular and hopes customers will like this option. 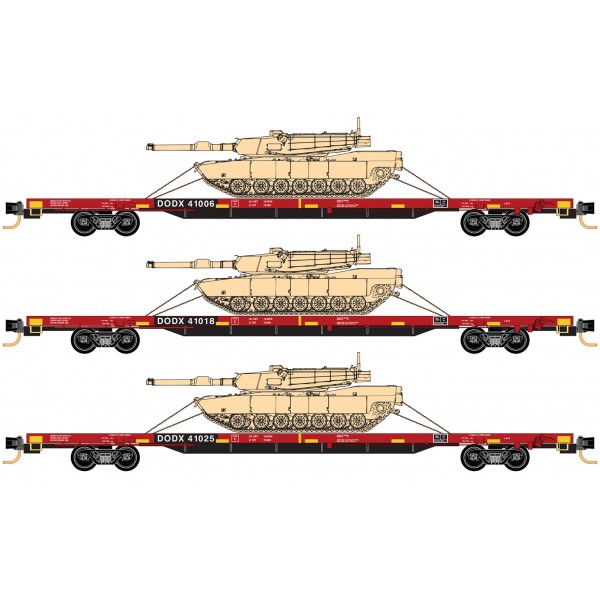 In 2018 and going forward, MicroTrains will continue to expand on their heavyweight passenger cars and produce more freight cars that will be more prototypically-accurate. These cars will have new underframes (so the bottom of the train car to the top of the rail will be lower and more realistic to real-life prototypes). In order to create more detailed and accurate cars, MicroTrains will use injection-molded tooling (versus etched metal) to create see-through roof walks. Other details to look out for will be a brake wheel step (in etched metal) and of course, the ever-popular body-mounted couplers.

MicroTrains will begin re-tooling its existing (out-of-date toolings that harken back to the 1970s when the company first started in n-scale) boxcars beginning with 50 foot cars and then moving on to 40 foot cars. âCustomer expectations are higher and MicroTrains is responding to that,â said Smith.

North American Railcar Corp
At the Winterfest (n-scale / NTrak convention a the Amherst Train Show) first Manufacturerâs N-Scale Mini-Show on Friday night, I got to hear Dan Huberman, president of North American Railcar Corp. Huberman discussed the 36 structurally different versions and 93 paint versions of the Pullman Standard 5077 cu.ft. single door box car, which will be available in 2018. Huberman noted some of the unique features these 36 versions will showcase, including side sills, under frames, roof heights, ends and door styles. Huberman had sample H0 models to show attendees what the n-scale models would look like.

Huberman also discussed two other products on the horizon: National Steel Car 5093 c.f. combo door box car and the K+S Potash Canada, a new blue covered hopper that models a brand new prototype that K+S Potash Canada has been using since August 2017. Potash is used to help fertilize soil. The n-scale model will feature many road names and be available in about 18 months.

Rapido
Among other products, Rapidoâs Bill Schneider showcased the n-scale United Aircraft TurboTrain (this was the first sample at a show). This item is expected to come out some time in 2018 and have full DCC sound capabilities and ESU LokSound functionality. Rapido is still taking orders for this New Haven 8600 series coaches.

ScaleTrains seemed to be the only manufacturer with a completely new product announcement for the show. Shane Wilson, president, ScaleTrains (on Friday night at Winterfestâs first Manufacturerâs N-Scale Mini-Show) announced the Greenbrier (Gunderson) 5188 cubic foot covered hopper (due out this summer) and had production samples of this model.

Walthers continues with its HO focus but did have on display the EMD SW1200 Switcher, with a February 2018 delivery date. It also had some Dairy Queen buildings on display. 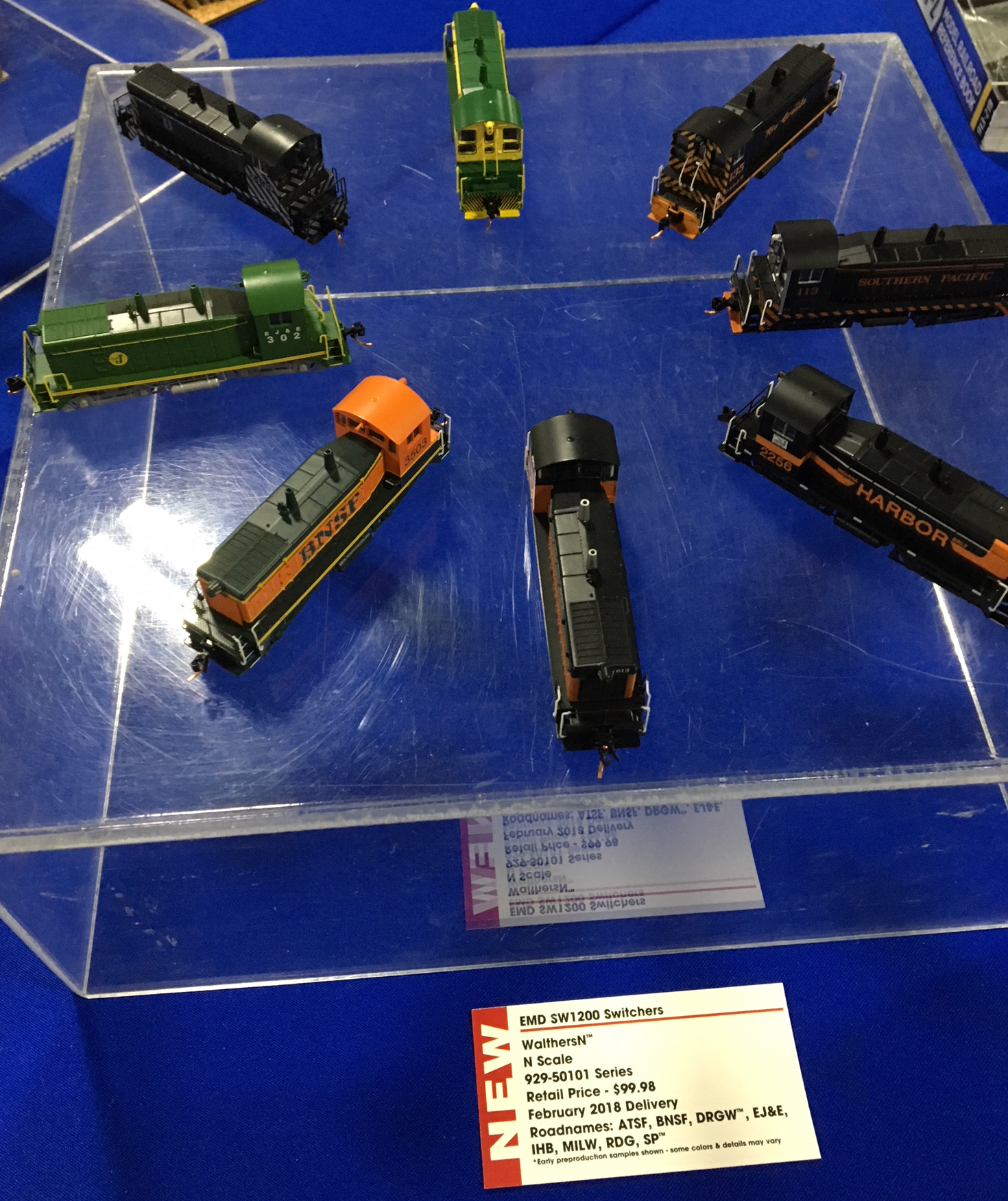 
Click Here for all Articles on N Scale Model Trains