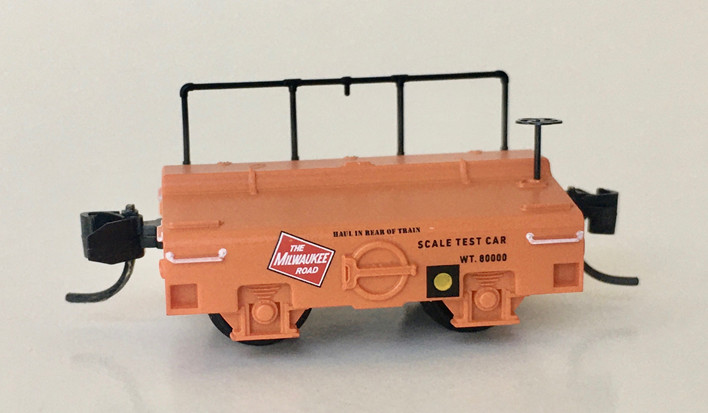 The road names represented in the most recent collection include: My review includes observations of the Milwaukee Road #980238 (MTL stock number 121-00-130).

It started with two brothers, Thaddeus and Erastus Fairbanks, in St. Johnsbury, Vermont. In 1824, the men joined forces and formed the E&T Fairbanks Company - a lucrative business that manufactured, amongst other products, cast iron plows and stoves. Thaddeus, a businessman and inventor, realized that the weighing systems for large objects of his era offered inaccurate results.

Thus after several years of trial and error, Thaddeus perfected his newest invention - the platform scale. A series of short and long levers achieved highly accurate results. In 1830 Thaddeus patented this design, known as the Fairbanks Scale. The platform scale was large enough to measure the weight of a full wagonload - once unloaded the same empty wagon was weighed and the scale offered accurate measurements to calculate the fair value of the harvest or other products brought to market by wagon. The Fairbanks Company applied this same principle to the railroad industry and was granted the first railway platform scale patent (No. 16,381) on January 13, 1857.

The necessity and function of the railway scale are to weigh entire freight cars and its contents: â¢ Railcars are weighed to ensure they are within the axle load limit for the railroad. Track is designed to support a maximum load; damage can occur if rails are traveled by rolling stock with too heavy a load. â¢ Accurate billing of railroad customerâs for the hauling of bulk commodities - neither side wants to be short-changed or over-charged â¢ Assuring customers received the correct amount of tonnage billed â¢ Confirming the power requirements for the train consist â¢ Verifying amount of product they can be loaded into each railcar before exceeding weight limits. It is important to what the weight of a railcar is empty and compare that number to the same loaded car. Thus a railcar is weighed when built and every year or two after to establish its Light Weight. The Light Weight is stenciled on the carâs side. Railcars are even weighed after repairs and paint jobs to verify this number.

The scale test car was developed to calibrate the scales used to weigh pieces of rolling stock. Most tests car were riveted steel construction with a compartment for tools. These tools had to be removed before placing the car on the scale. Any alterations or repairs to these cars had to be authorized by the scale inspector. The scale car would be recalibrated after any such repair and the date of this recertification stenciled on car.

The car must remain a precise weight, thus the scale test car does not have airbrakes but instead only a hand brake and drawbar. The weight of the car would be altered when the brake shoes gradually wear and make the overall weight lighter. The scale car was also constructed with distinctive sloped sides to prevent rain and snow accumulation from varying its weight.

The early scale test cars were small; typically sixteen feet in length; and placed into Maintenance of Way service. The cars were historically âhome-builtâ by the railroads and reportedly filled with steel weights held behind its sealed end doors, concrete or even sand (If true, I think sand would be a poor choice due to changing moisture content altering its weight). Most of these cars had a test weight between 65,000 and 80,000 pounds. The classic two-axle designed cars enjoyed an exceptional service of nearly 100 years since they were well maintained, annually inspected and didnât have many moving parts to wear or break with know examples surviving from the 1890âs. 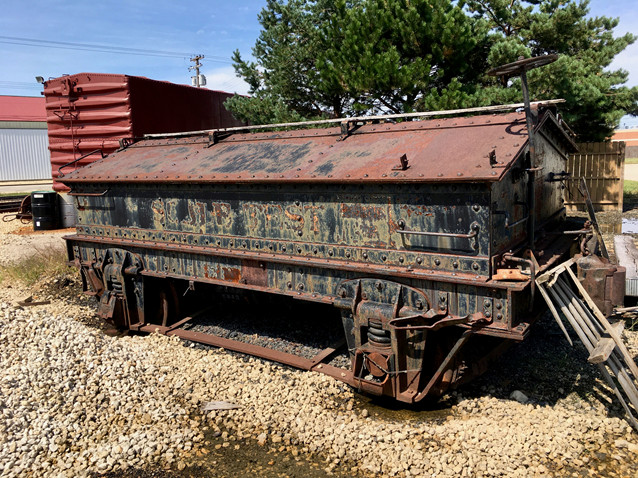 The small test cars, with their fixed wheel set and lack of brakes, are normally handled at the rear of train either between the last two freight cars (if no caboose) or immediately ahead of the caboose.

In short, the scale test car is weighed alone to calibrate the platform scale. The test car is a solid weight; it does not collect any information. Then an empty car, with a known weight, is weighed to see if the scale is within an agreed tolerance level. If not, adjustments are authorized to have the scale recalibrated to proper levels - usually within 0.002 times the true weight. Thus an 80,000-pound test car should yield a reading within 160 pounds of true weight (79,840 - 80,160 lbs.). Once adjusted to proper ranges, loaded freight cars are weighed and have the known empty car weight subtracted to either verify load content for customers and/or waybill hauling charges.

Platform scales are inspected and certified annually. The scales are tested at four different locations along the platform: extreme left, left of center, right of center and extreme right.

The ready-to-run scale test car will be the smallest piece of rolling stock ever to ride your layout - measuring at one inch. The model comes packaged in a clear plastic jewel case with a slip-off cover and a two-piece plastic cradle to cushion the car. The model information is labeled on the end of the case, but the situation with most Micro-Trains data panels, the text is too tiny to be clearly read by those with bad eyesight.

The paint job is crisp and even along the entire injection molded plastic model. The car is painted in the familiar Milwaukee Road orange with their famous red & white slanted logo. Lettering is extremely sharp and clear, even when some magnification is needed for the smaller printing. But those small characters are neat and legible. All of the diminutive letters and numbers are fine and readable - even the directive to âHaul In Rear Of Trainâ and the car weight of 80,000-pounds.

The petite model offers little in detail. Both sides feature white grab irons on either end of the car and the center wheel that locks the compartments of the scale car. The sides also have poling pockets (squares in each corner) present - a push-pole was used to shove the car without the need to couple. Each end also has two white grab irons with the road marker and road number clearly printed (MILW 980238). 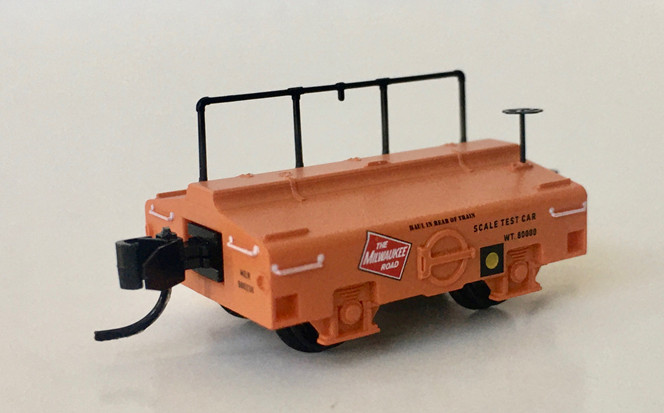 The top includes the prototype correct sloped pitch with separately applied railing and Miner model hand brake. Both of these details are quite fragile and extra care is needed to avoid damage. The scale test car top also features molded latches and hinges. The bottom displays no detail - a two-axle configuration with black plastic wheels and Magne-Matic couplers mounted at the proper height. 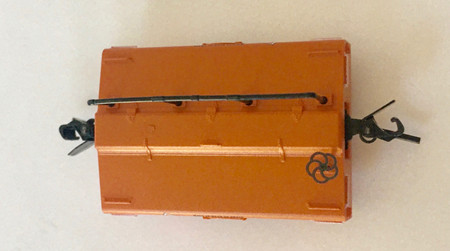 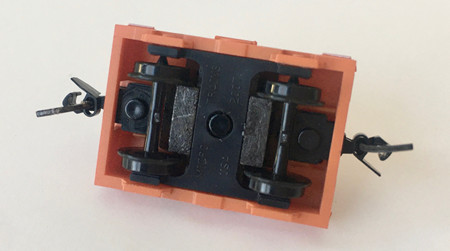 Not much here, Lack of Underside Details


The car is 1 inch in length and weighs just 0.10 ounces, which is extremely light according to the National Model Railroad Association (NMRA) recommendation (which is 0.65 for a car this size). Although no possible weight adjustments can be made to the model, I found it a good runner on Kato Unitrack with no issues around curves or through turnouts at slow and medium speeds. The scale car was tested on a twelve car freight train consist running between the last two cars. I was surprised to experience no wobbling amongst the two freight cars and the entire train ran smoothly. 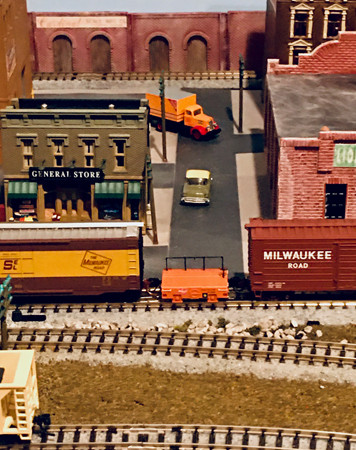 
When compared to the âreal lifeâ prototype there are a few glaring omissions. First, the real Milw 980238 has three placards posted along the top railing. The middle placard is large, orange in color and features the road maker and road number. On either side are two smaller white placards: one giving orders to not make any alterations without the scale inspector authorization and the other explaining the speed restrictions of 25 mph on main line and 20 mph on branch line. The prototype also has a data panel and stenciled dates not present on the model. Lastly, the prototype grab irons are painted white on the top of the car. The Micro-Trains car represents these details in a chucky, molded orange color fashion.

Given their unique size, railroad operation and storied history; the two-axle scale test scale would make a welcome addition to any prototypical layout based from the steam era into the mid-1990âs. The Micro-Trains model is well built and decorated to their high standards but I believe they fumbled the ball at the goal line. I would have liked to seen Micro-Trains to go that extra mile and add the railing placards present on almost all prototype images and featured on the Bachmann Trains HO scale test car series...even if the price point needed to be bumped-up. Micro-Trains is an industry leader and that attention to detail would have made this a superior prototypical model. All in all itâs a fine car and will be a pleasure to have it zipping along my rails from time to time.

ScottAKoltz became enamored with trains while watching the âGreen & Yellowâ double-decker cars clad with shiny green windows (C&NW) rumble by his childhood house in Chicago. His first train set was the Tyco Bicentennial model in 1976. Always a fan of the railroad, ScottAKoltz is newer to the hobby, active for the last four years (now that all the kids are grown-up!). Furthermore, he is also a collector of railroadiana focusing on lanterns, stock certificates and insulators.