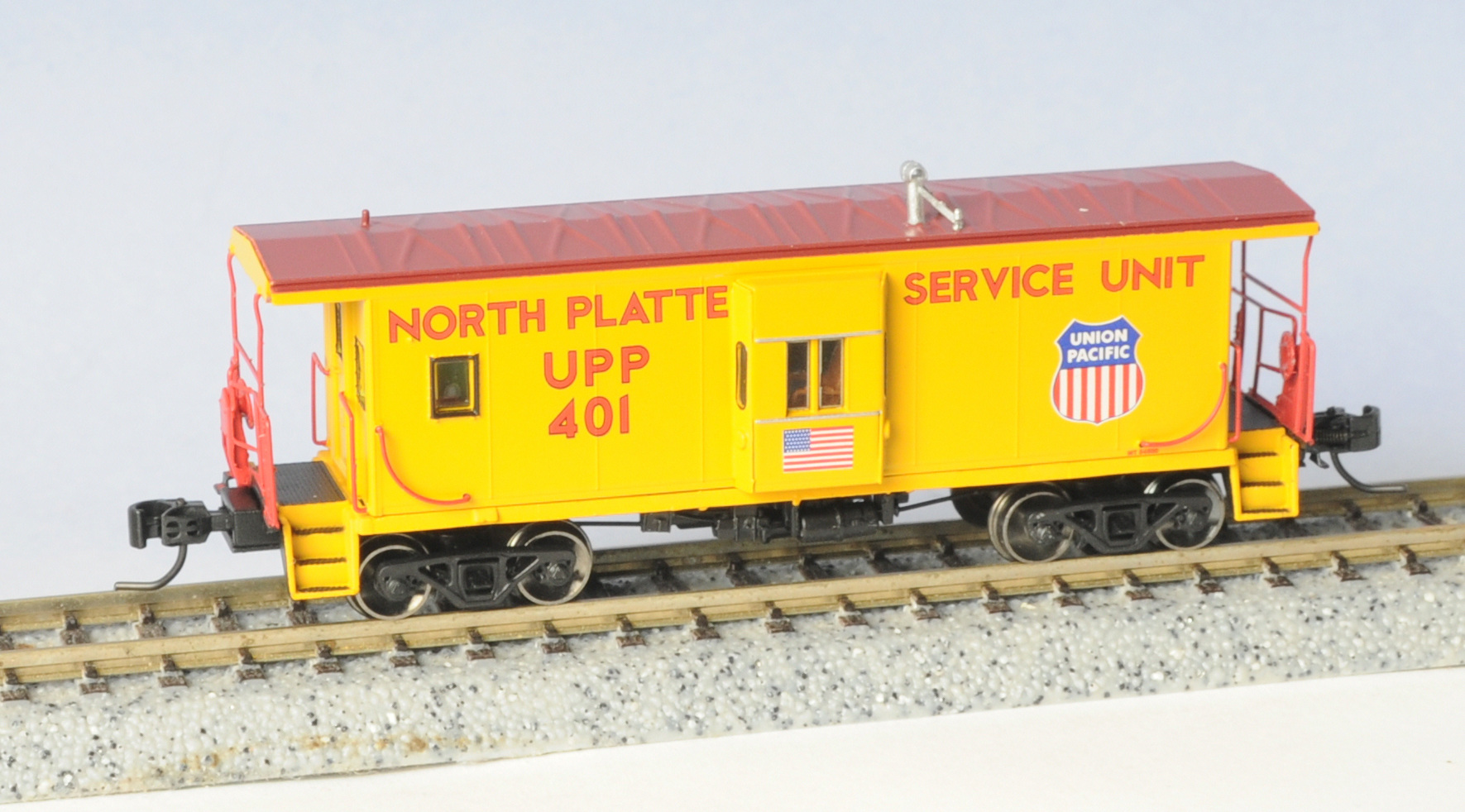 This latest release includes eight different paint schemes. The road names represented in this collection include: Three different road numbers are available for each railroad with a suggested retail price of $30.98 (Union Pacific Police is only offered in one road number).

The lovable caboose - once a mainstay on the North American railway is now reminiscent of a champion thoroughbred put out to pasture and forgotten by the masses.

The story of the caboose can be traced back to the 1830âs when flatcars were equipped with cabins to house the train crew. Several references credit the Chicago & North Western Railway in 1863 with the initial use of the cupola caboose (small window structure atop the caboose roof) for crews to monitor the train and track conditions.

The caboose was a North American railcar placed at the end of a freight train to provide shelter for crew members needed for switching and braking operations, observing for a shift of load or damage to equipment, monitoring for overheated axle bearings (called hot boxes) and protecting the rear of train when stopped.

The caboose also served as the conductorâs office and included his work desk, storage lockers, stove for heating & cooking, toilet and sleeping accommodations - for many crewmembers the caboose was âtheir home away from homeâ and was embellished with many personal items.

Inside Illinois Central 9648 in South Elgin, Illinois (Photo by Author)

Inside North Shore Line 1003 in Union, Illinois (Photo by Author)

The early caboose, first constructed with wood before evolving into steel panels, used the cupola or âstandardâ design of the Chicago & North Western to watch the train ahead. The cupola offered a full view of running conditions from above. The cupola was fitted with seats usually assigned to a crewmember such as flagman or conductor. Access to the sitting area was gained by a ladder or steps, which were dangerous to maneuver. The position of the cupola differed amongst systems with many eastern railroads preferring a center of car design while western roads gravitated towards a rear of car placement.

The bay window design was developed to provide a better view of conditions on both sides of the tracks, enhance the safety for crewmembers and eliminate the concern of height restrictions of the cupola for tunnels and bridges. The Akron, Canton and Youngstown Railroad first used the bay window in 1923 but the design gained more acceptance with the Baltimore & Ohio constructing all of their cabooses in this fashion starting in 1930.

The bay window caboose acquired its moniker because the extended walls resemble an architectural bay window with a crewmember seated in the middle of each side section. This seating arrangement reduced the working hazards of slipping off the cupola steps and injury from bouncing around the inside of the cupola tower.

The Milwaukee Road and Northern Pacific were also both early pioneers of the new bay window design with over 900 cupola cabooses converted between them in the 1930âs. Furthermore, the Milwaukee Road constructed more than 300 bay window cars in their own shops between 1939-1951 - many in the unique horizontal ribbed-side design (see below).

The caboose met its demise in the early 1980âs with relaxed safety laws and new technology. In 1982, the Railway Labor Act directed United States railroads to dispose of cabooses as soon as possible. Similarly to a concern today, innovation not only repl

First, a caboose is a non-revenue railcar and was kept in service well past the average lifespan of a freight car. Many were beyond being useful and were scrapped, sold or donated. Secondly, advancements in technology resulted in the elimination of a large operating crew and the caboose itself: lineside defect detectors used to spot hot boxes, end-of-train devices (EOT or ETD) monitor air brake pressure and emit a blinking red light to warn trailing trains of a train ahead, dispatch controlled switches phased out the need to manually throw switches, bigger locomotive cabins could transport entire crews (most of the time only a two person crew is required to work freight) and better freight car design helped avoid the issue of shifting loads.

Today a few caboose cars are still in service - mainly used for maintenance of way (MOW), as a shoving platform on industrial spur lines that perform long reverse moves & heavy switching or on tourist/museum railroads.

Both of these Union Pacific cabooses are former Rock Island cars rebuilt in November 1987 as research and testing units. Amongst other tasks, the cabooses would test track geometry and help develop new railroad maintenance practices and procedures. UPP 400 was the former UP 24531 (ex Rock Island 17113), and UPP 401 was the former UP 24540 (ex Rock Island 17122). By 1990, neither car was needed as a research caboose and all testing equipment was removed before both were transferred to North Platte, Nebraska. Once at North Platte, both railcars were painted Union Pacific Armour Yellow with North Platte Service Unit UPP markings.

Nicknamed âsnow busesâ by yardmasters, the two cabooses remain active today out of the Union Pacificâs Bailey Yard as crew shuttle cars when the harsh Nebraska winter make the roadways too hazardous to travel. When travel conditions are poor, the Union Pacific will couple a locomotive at each end of the caboose and bring out a fresh crew to the awaiting engine and transport the âout-of-timeâ crew back to Bailey Yard on the return trip. Thus the reporting marks of UPP - assigned to Union Pacific passenger service.

The ready-to-run boxcar comes packaged in a clear plastic jewel case with a slip-off cover and a clear two-piece plastic cradle to support the model. The model information is clearly labeled on the end of the case for ease to locate when in storage. A thin plastic sleeve was wrapped around the car to protect the print job from scuffmarks. Also included are two small plastic bags with several detail parts including a vent, antenna, window trim and marker lights.

The paint job is clean and even along the entire plastic model. The Union Pacific Service Unit caboose is painted Armour Yellow with crisp red lettering. The Union Pacific shield and American flag decals are neatly applied, bold and straight. All numbers and letters are placed in the proper location on the side of the caboose in the correct color and font when compared to prototype images. The sides also feature separately applied wire grab irons and crystal clear window glazing.

Although being a sharp looking model, there are some discrepancies visible when comparing the Athearn model to the actual prototype.

First, the Athearn model sports straight trim panel lines above and below the bay window. The actual UPP 401 has âv-shapedâ lines on the bay window panels.

Secondly, the window configurations are not correct on the Athearn Union Pacific cabooses. I would attribute this fact to Athearn using a general caboose model for all railroads and some errors are bound to happen - I am alright with that...itâs a great looking car that will see some running time on my modern layout. But prototypical modelers will not be so understanding... to begin with the actual UPP 401 has three windows on each platform end - one for the door and one on each side panel. The Athearn model only displays two windows - one for the door and only one side panel.

Furthermore, on the smoke jack side of the caboose the prototype UPP 401 has two windows on the left of the bay window on either side of the UPP road markings. The Athearn model exhibits only one window on the entire side - on the far left panel. Lastly - for those nitpickers - the Union Pacific smoke jacks are black on all photographs I have viewed... the separately applied Athearn model has a silver smoke jack. A little paint will fix that detail. Note: the marker lights seen on the prototype above the end platforms are included in the bag of extra fine parts.

Again, the end platforms are not prototypical when compared to the actual Union Pacific caboose - but for me - they are good enough. For instance, the before mentioned incorrect window patterns and tiny detail parts that need to be applied by the user may be an issue for some modelers. The end railing and piping configurations are not the same but you need to study side-by-side images to even notice the difference. The separately applied end platform handbrakes and grab irons are mounted in the proper locations. Additionally, a neat feature are the black treaded steps and end walkway. Nice little touches that will make you say âccccoooooolllâ.

The caboose is 2 7/8 inches in length and weighs about 0.7 ounces, which is a tad light according to the National Model Railroad Association (NMRA) standards (which are 0.9 - 1.0 ounces for this size car). The recommended minimum radius is 15â.

Another impressive release from Athearn Trains - a fantastic paint job, clear window glazing, treaded walkways, metal wheels and many separately applied detail parts make this a winner in my book. Yes, the prototype modeler will find issue with the generic body-type...but I can overlook that fact. While Union Pacificâs vision is âBuilding Americaâ - Athearn Trains vision has been âBuilding Great N Scale Productsâ.