Each road name is available as a single car with a suggested retail price of $24.95, a two-pack for $49.90 or a three-pack for $74.85. All six featured hopper cars for each railroad have unique road numbers. Each hopper is equipped with a black plastic coal load and Fox Valley Models metal wheels.

The basic open hopper design is like an empty box with wheels or a wagon with taller sides. The floor of the hopper railcar angles downward to outlet gates allowing the load to discharge freely. The heavily abused open hopper was one of the first all-steel constructed railcars â placed into service hauling coal and other aggregates (gravel, stone, etc.) from mines to industrial centers or shipping ports.

The Interstate Commerce Commission (ICC) in December of 1917 recommended federal control of the railroads to help coordinate efforts to support the nationâs World War I operations. This ânationalizationâ of the railroad system was approved by President Wilson and the United States Railroad Administration (USRA) was created to supervise all passenger and freight traffic. In February 1920, the Transportation Act of 1920 (also known as the Esch-Cummins Act) was passed giving the ICC greater oversight over the railroad industry and eliminating the USRA as of March 1920. The Transportation Act of 1920 gave the ICC power to approve or disapprove mergers and abandonments and to set rates. It also returned control of the railroads back to private operation with the federal government giving financial assistance to restore the rail industry.

One of the duties of the USRA was to develop and approve standardized designs for locomotives and railroad cars. The USRA approved plans for a two bay 55-ton and three-bay 70-ton open hopper. The two-bay 55-ton prevailed as the more popular choice amongst the railroad industry â with over twenty-two thousand built during the USRA years and another twenty-eight thousand constructed after their reign. These hoppers were 30-feet long and featured seven exterior post braces. Many of these hoppers were still used in revenue service until the late 1960s.

In 1934, the American Railway Association (ARA) established their own set of standards for the offset open hopper design. Unlike exterior vertical support post hoppers used until this time, the offset side hopper was constructed with vertical side braces positioned inside the hopperâs frame with steel sheathing wrapped and riveted around the outside of the posts. The side panels slanted slightly inward towards the top of the hopper with support âstiffenersâ placed along the rim of the railcar. The primary commodity hauled in these hoppers was coal - the intention was to increase the volume capacity of the railcars without increasing the length of the hoppers.

The ARA designs included a thirty-five-foot two bay 50-ton offset open hopper with a 2145 cubic foot capacity â over 200 cubic feet more than the USRA exterior post car. Over 127,000 of these 50-ton hoppers were constructed. The ARA three bay 70-ton offset hopper was developed in 1938 to help quench the damage for American coal. This forty-one-foot-long car had a load capacity of 2773 cubic feet. Over 32,000 of these ARA inspired hopper cars were constructed and continued to be used well into the 1970s.

The next generation of these ARA offset hopper cars saw a growth in length in the mid-1940s... two-feet on the 50-ton cars and one-foot on the 70-ton cars. Additionally, this era saw the introduction of âheap shieldsâ or protruding curved extensions fastened on the car ends to impede materials from spilling over the ends of the railcar. Furthermore, while still predominately riveted into the 1950s â American Car and Foundry (ACF) and Pullman-Standard began to weld posts on two-bay cars in the late 1940s. Finally, also in the late 1940s, there was some experimentation with the use of aluminum for open hopper railcars.

The offset open hopper did accomplish the task of providing more load capacity when compared to exterior post cars of the same size â the interior post (offset) hoppers did have an inherent set of problems. The inside stakes were prone to damage with loads knocking the posts out of position and causing the sides of the hopper to buckle outward. Interior angle braces were installed to provide additional support for the side walls. Also, the interior posts often corroded with the direct exposure of coal dust and moisture.

The repairs to offset hoppers cars proofed to be extensive and expensive. Thus, the demand for offset open hopper cars waned in the 1950s with a movement towards the sturdier exterior support post design. In 1957, the ARA introduced a forty-one-foot three-bay 70-ton exterior post standard design.

As a sidenote, with a national metal shortage during World War II â the American Association of Railroads (AAR) did approve the construction of two-bay 50-ton composite or War Emergency hopper cars. These hoppers were constructed with external steel truss bracing and wood sheathing. The wooden side boards were thicker than traditional steel sides, less lowering the volume capacity of these hoppers. These composite hoppers were rebuilt with steel sides after the war â a chore that lasted into the 1950s.

The ready-to-run open hopper comes packaged in a clear plastic jewel case with a slip-off cover and a unique two-piece plastic tray to cradle the model. The Bluford Shops âVacuformedâ tray is a brilliant piece of packaging â a snug fitting cushion with an easily removable thin lid...a case within a case. A thin plastic film was wrapped around the car to protect the railcar from blemishes. The model information is clearly labeled on the end of the case for ease to locate when in storage. No additional detail parts were found in the packaging. 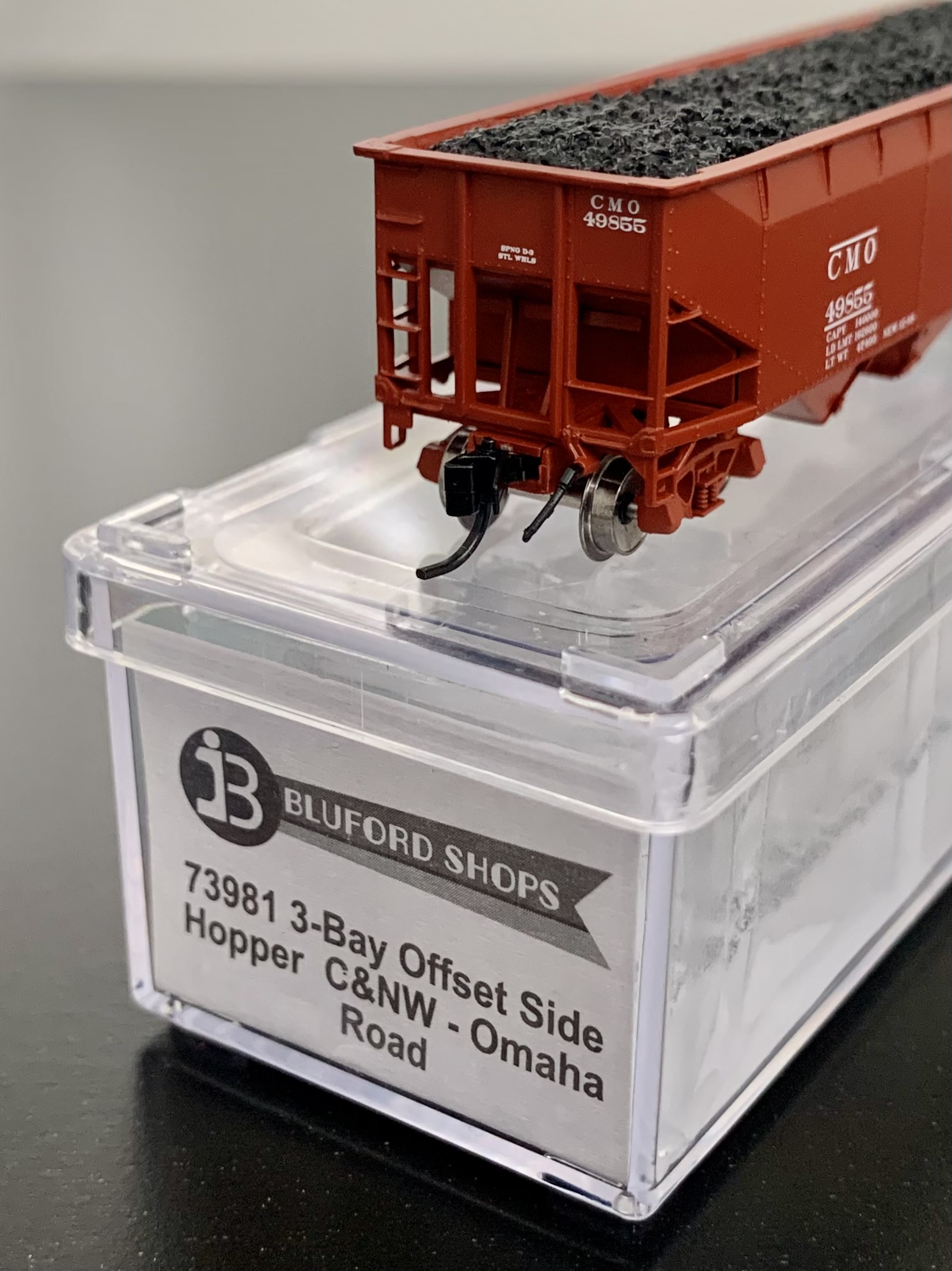 This Bluford model is a representation of a Pullman-Standard built American Railway Association (ARA) three bay 70-ton offset open hopper that was designed in 1938. The 41-foot hooper car is correctly labeled with the cubic footage of 2773. During this era, Chicago & North Western assigned odd road number to open railcars and even road numbers to enclosed cars. The oxide red paint job is crisp and even along the entire model. The sides and ends of the model are injection molded plastic while the interior center bay sill is diecast metal. The white lettering is extremely sharp and clear, even when magnification is needed for the smaller printing. The placement, font, and size of printing is like that found on the prototype image for CMO coal hopper #49899. 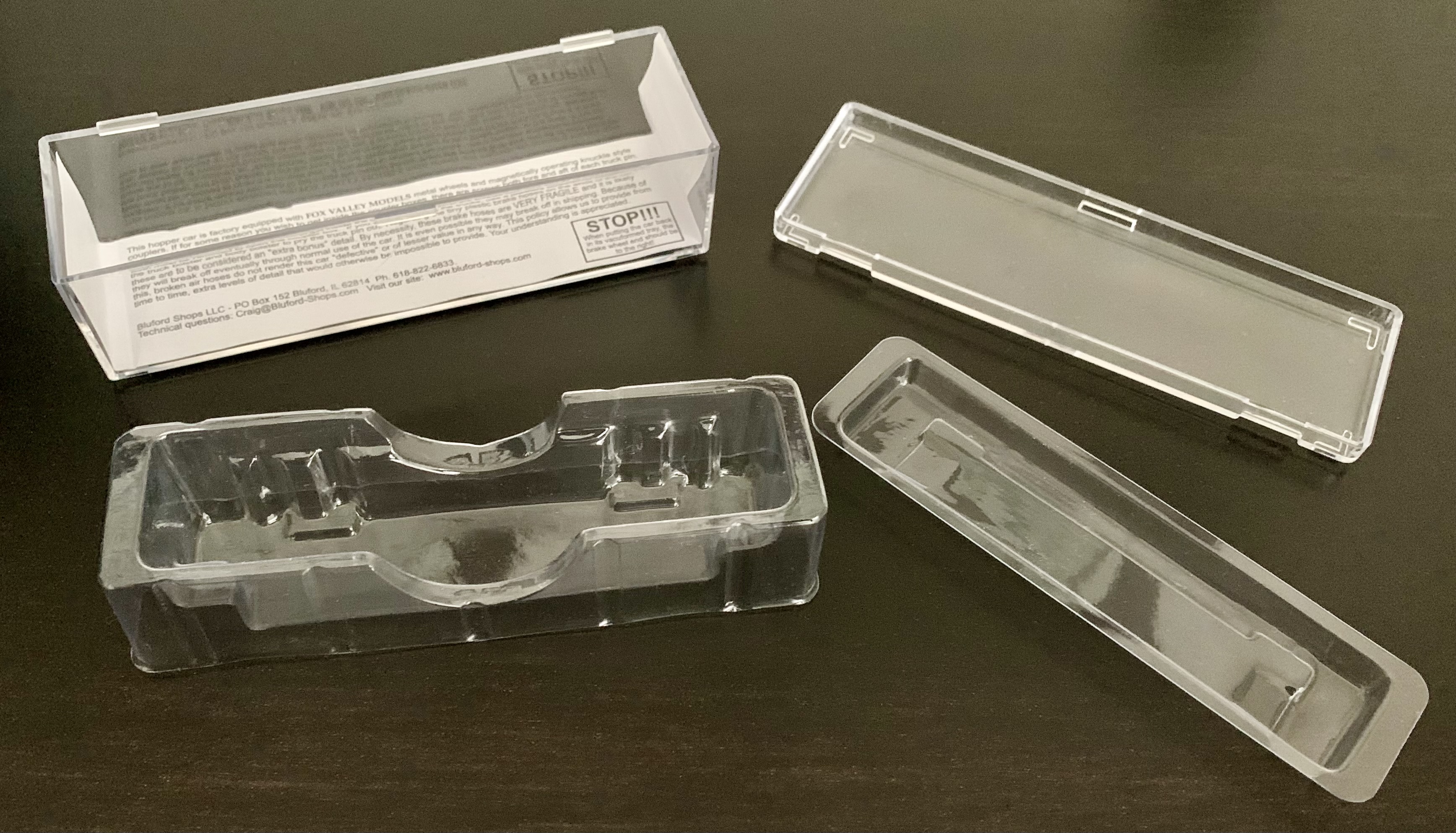 The Bluford model, with a 1948 built date, is stenciled for the Chicago, St. Paul, Minneapolis and Omaha Railway or the Omaha Road. With the reporting marks CMO â the Omaha Road was founded in 1880 with the consolidation of the Chicago, St. Paul & Minneapolis Railway, and the North Wisconsin Railway. The Chicago and North Western Railway gained control of the CMO in 1882 and leased the Omaha Road tracks in Nebraska, Iowa, Minnesota, Wisconsin, and South Dakota starting in 1957 before merging the two railroads together in 1972. The Union Pacific Railroad purchased all properties of the Chicago and North Western in 1995 and still use the CMO reporting marks on some of its rolling stock today.

Each side of the model features the prototype correct eleven rivet panel sections and ten support stiffeners across the sloped top lip of the open hopper. The steel constructed body displays sharp rivet patterns and proper grab iron and stirrup step configurations. Lastly, the Bluford Shops car boasts the era correct Chicago and North Western System logo. The C&NW used the âsystemâ moniker during 1944 thru 1957 and again 1982 to 1995. 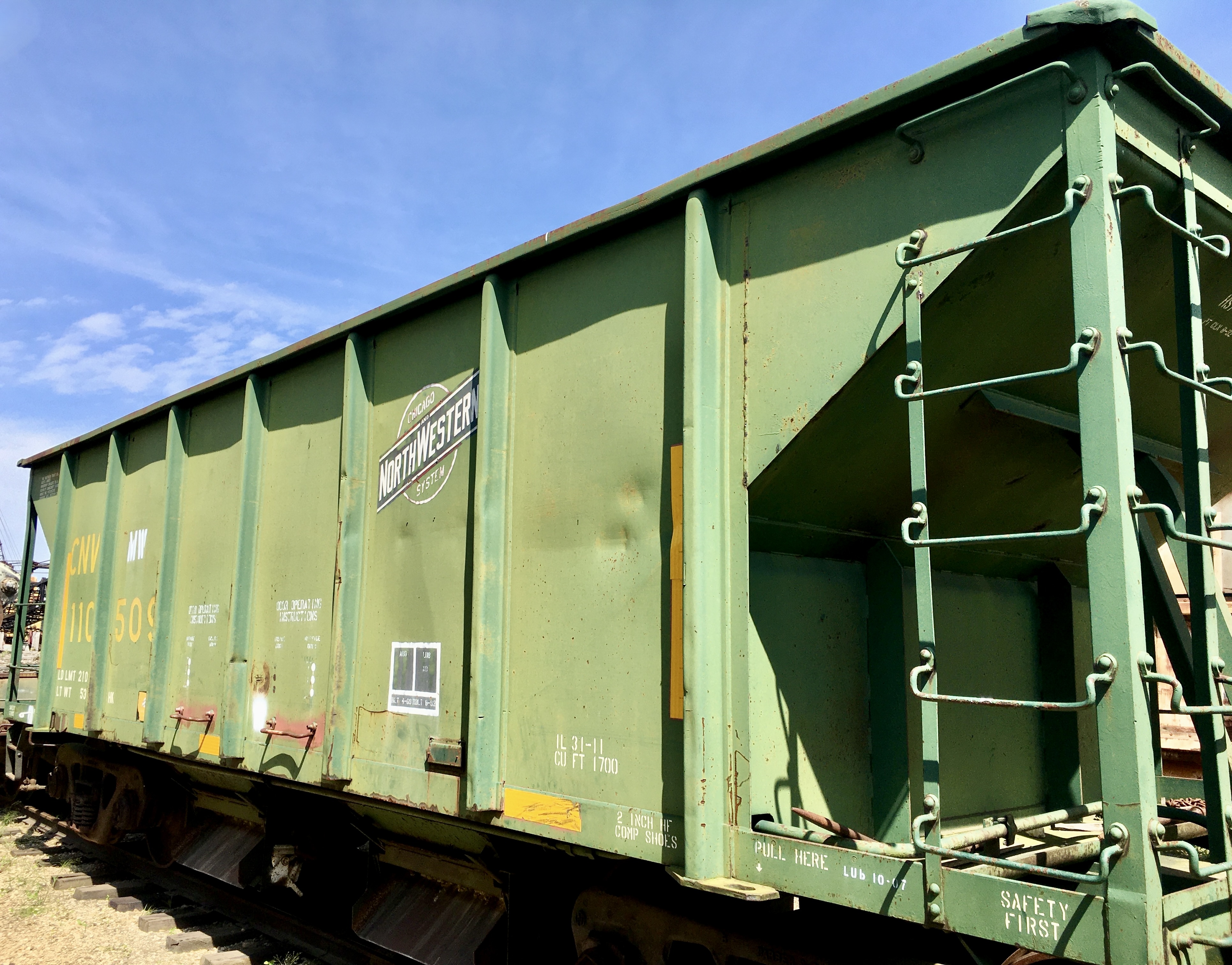 Both ends feature a full height ladder and support rails for the outer sloped discharge bays. A high mounted Miner handbrake and platform is located on one end along with air tank, valve, and brake line assembly visible on the end deck. Body-mounted brake hose detail parts are affixed on each car end â care is needed not to break these fragile pieces. The lettering is neat and in proper arrangement with the road marker and road number at the top right corner of each end. Furthermore, the hopper car is stenciled with its hydraulic cushioning, coupler and wheel data centered on the top panel of each end (SPRG D-3, STL WHLS). 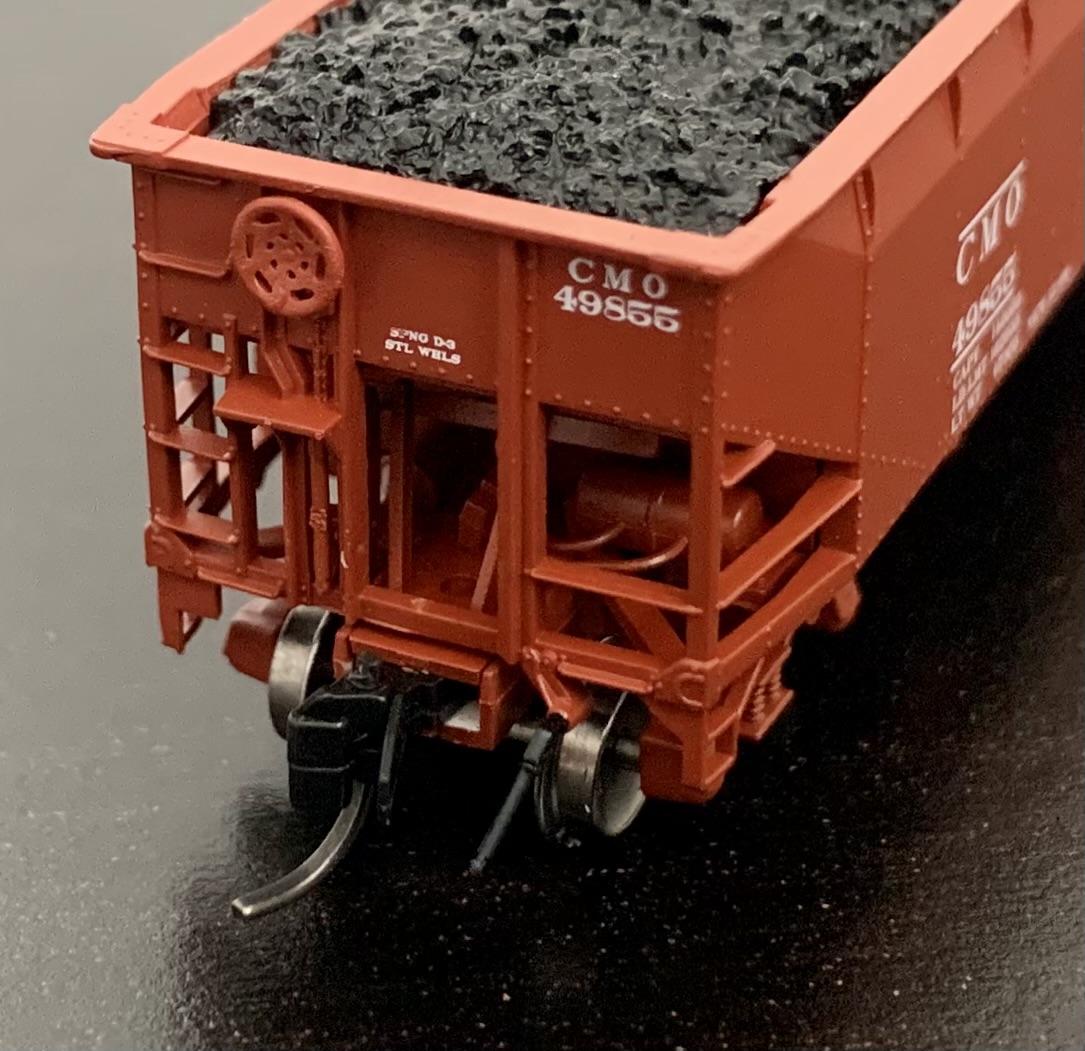 The inside of the two-bay hopper displays sloped sides directing the carload towards the six outlet gates â each bay has two gates on either side of the hopper car. The interior also features rivet patterns, side braces and diecast center sill construction. The coal hopper load is removable and extra weight can be hidden if desired under the authentic-looking cargo.

The underside of the hopper car is simple with six mounted outlets gates. These discharge gates are detailed with rivet lines and outlet hatch hinges. The model rides along smoothly on silver Fox Valley Models metal wheels. Both body-mounted magnetic operating knuckle couplers were aligned to proper height. 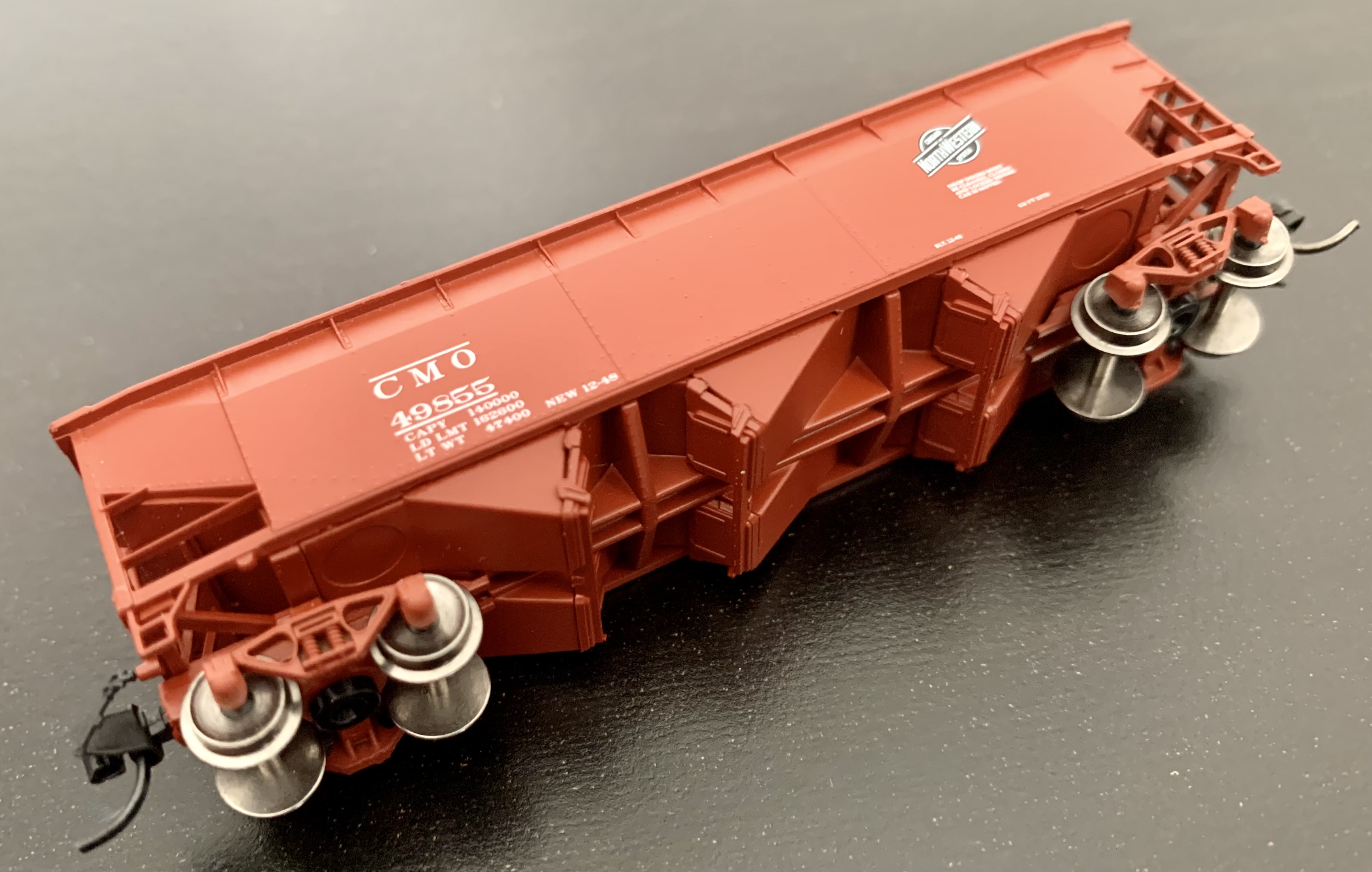 The Bluford Shops model is 3 1/16 inches long and weighs 0.80 ounces, which is light according to the National Model Railroad Association (NMRA) recommendations (0.98 - 1.0 ounces for this size car). The hopper car has a nice balanced âfeelâ in your hands and has ample room to add weight inside the open bay compartments. It was an excellent runner while testing the car on Kato Unitrack with no issues around curves or through turnouts at slow and medium speeds.

Bluford Shops provides a top-notch transition era offset open hopper. A well-made highly prototypical correct railcar with great attention to the details: crisp rivets, brake hose, and metal wheels. Little modification is needed (some extra weight if wanted) to be a great running car. You will not go wrong grabbing a couple of these hoppers to service your coal industries.