The new year rang in with style for N Scale model railroad fans with the highly anticipated release of the Trainworx Inc. Flexi-Van Flatcars and 40-foot Flexi-Van Trailers. Originally announced in February 2018, this is the second release of Flexi-Van cars by Trainworx - the initial collection issued in the fall of 2017.

Piggyback service comprises of at least two forms of transportation (rail, road, water, or air) to deliver freight. In North America truck-rail, truck-water and rail-water are the dominant modes of this multimodal transportation model. The original concept of truck-rail service was a time-consuming task. The flatcars were loaded and unloaded with a tractor backing trailers up-n-down an end-ramp. If a string of cars needed to be serviced, the tractor could work amongst the cars with collapsible bridge-plates located on the ends of the flatcars that âlinkedâ the cars together and allowed the tractor to move freely from deck to deck. Once placed into position, a jack was situated under the kingpin of the trailer and an array of metal chains secured the trailer to the flatcar deck.

The Pennsylvania Railroad (PRR) shops designed and built the first flatcar specifically constructed for Piggyback service. In 1955, the PRR placed five hundred Class F-39 flatcars into TOFC service. These 75-foot-long flatcars could haul a pair of trailers each up to 35-feet in length.

In November of 1955, the Pennsylvania and Norfolk & Western Railroads, along with the Rail-Trailer Corporation jointly devised an arrangement that pooled all their piggyback rail equipment. The new company name - chosen from a PRR employee contest â Trailer Train (TTX) standardized two-trailer rail equipment, provided its members with the best and most current equipment and furnished equipment at the lowest possible cost. The Pennsylvania Railroad reassigned the F-39 flatcars to Trailer Train and the new enterprise grew to 32 railroad members by 1960.

In 1957, two significant transit developments affected the Piggyback service industry. First, the 40-foot semi-truck trailer was approved for interstate use across the United States, making the seventy-five-foot F-39 flatcars underutilized. In return, Trailer Train designed an 85-foot flatcar to counter this situation. Secondly, the New York Central Railroad in an effort to speed operations and reduce costs, in a joint venture with trailer and container manufacturer Strick Trailer Division of Fruehauf Corporation, designed and built the first Flexi-Van flatcar.

Seeking an alternative from traditional trailer-on-flatcar service, the New York Central selected a design from Strick Trailer that eliminated the need to drive or lift a trailer onto a railcar. The Flexi-Van loading and unloading method proven to be less time consuming and more efficient.

The low-profile New York Central skeletal cars were especially useful for the clearance restrictions on the systemâs trackage. Furthermore, hauling only the trailerâs body reduced tare weight (the total weight of tractor and trailer when the vehicle is empty) and lower load height cut wind resistance. The Flexi-Vans provided 5 to 10% less rolling resistance according to a 1966 study performed by the Santa Fe Railway, thus saving fuel. The Flexi-Van flatcar was pressed into passenger and freight train high-speed operations and proved valuable handling the U.S. Mail.

With the growing popularity of 40-foot semi-truck trailers on American roadways, the 85-foot Mark II flatcars could either haul two 36-foot trailers or one 40-foot and 36-foot Flexi-Van trailer. The Mark III followed in 1961. The 87-foot flatcar carried two 40-foot vans with or without mounted reefer equipment. The turntables were shifted to the car ends and required a specialized tractor to support the weight of the trailer while it was rotated into place. The final model was introduced in 1964 and was slightly longer in length.

Although mostly identified with the New York Central Railroad, Flexi-Van flatcars and trailers have also been used by: Burlington Route, Illinois Central, Milwaukee Road, Santa Fe, Seaboard Air Line, Southern Railway and Western Pacific. Trainworx offers a variety of these railroads in their Flexi-Van collection. The loss of United States Postal Service mail contracts in 1967 and the expanded use of containers led to the demise of the Flexi-Van. Wheel-less containers could be loaded into well cars or on flatcars, omitting the need for turntable decks.

The Flexi-Van flatcar arrived in a clear plastic jewel case with a slip-off cover and a hard plastic insert to cushion the model. The model information is clearly labeled on the end of the case for ease to locate when in storage. The trailer was packaged in the same manner with a thick plastic sheet wrapped around the van to protect from blemishes. A plastic bag was found in the same case containing extra landing gear.

The Flexi-Van flatcar used for my review: Trainworx 28462-01 â North American Car NIFX #7026...represents a Mark III phase prototype. The Trainworx model correctly mounted the turntables on the end platforms â prior to Mark III models the turntables were positioned near the center of the flatcar deck. General Steel Castings produced 25 Flexi-Van bodies for North American Car in 1961 (NIFX road numbers 7025 thru 7049). North American leased these cars to the Milwaukee Road. The Trainworx Flexi-Van features the proper number sequence and built date (10-61) of the true-life railcars.

The flatcar has a die-cast metal center sill with plastic turntables on the two end decks. The white paint job is bright and clean along the railcar with black stenciling. All lettering is sharp and clear, even when some magnification is needed for the smaller printing. All characters are neat and legible with correct placement, size, and font when compared to similar prototype photographs. The fully assembled silver trailer is plastic with free rolling wheels. The van proudly displays the Milwaukee Road and Flexi-Van names in bright, bold red and white letters.

Each end platform features a turntable with separately applied etched metal grab irons and stirrup steps. The brake end includes a handbrake mounted on a vertical shaft that extends below the end sill. This handbrake is very delicate, and care is needed to not bend or break it off. The flatcarâs road identifiers are clearly visible on the right end panel and the truck spring information (SPRG D4) is marked on the left panel. Truck springs are produced in an assortment of Association of American Railroads (AAR) approved sizes: D3, D4, D5, D6, D6A and D7. The springs carry the weight of trucks and car body and cushion vertical movements and help to reduce body swaying. Springs must be inspected frequently to spot if any are missing, broken, misaligned or the wrong size was installed. 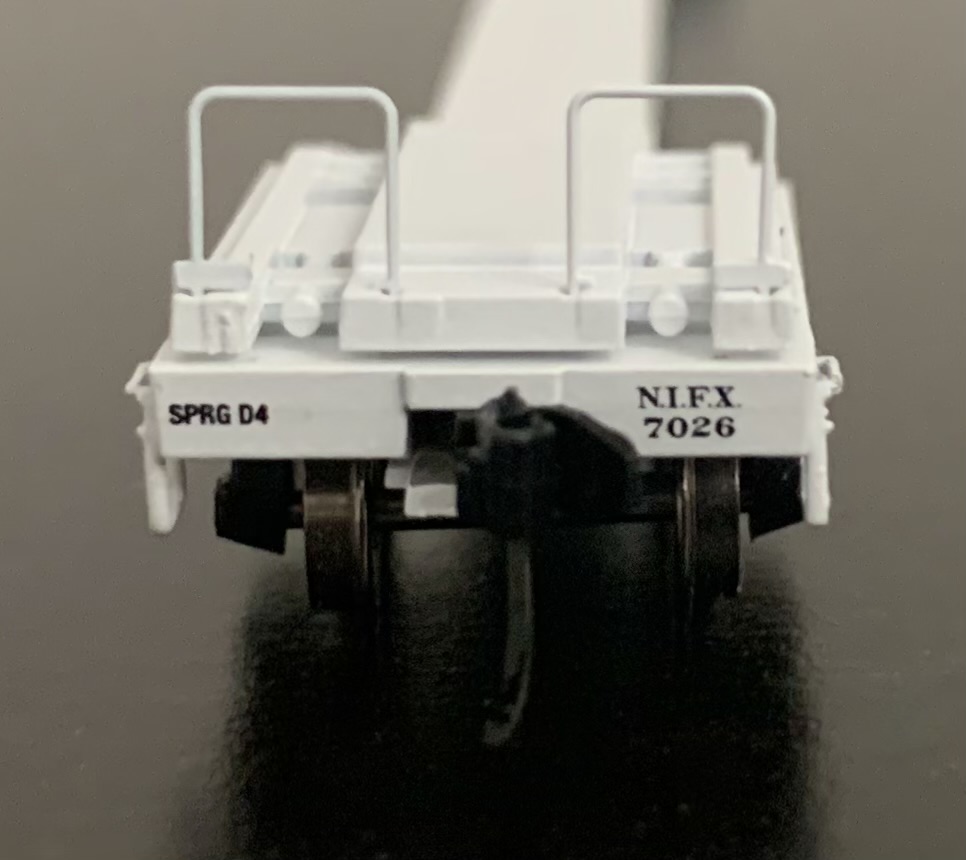 The plastic Trainworx 40-foot trailer is equipped with a removable bogie assembly and landing gear/support legs. These details parts snap in-n-out of the pin holes on the bottom of the trailer. The kingpin (protruding piece near the bottom-front of the van) rests into the square fitting near the center of the flatcar car. The rear of the van reclines on the turntable. Slight pressure can be applied to the trailer for a snugger connection between the kingpin and mounting bracket. ONLY 40-foot trailers with a mounting kingpin can be used for proper road operations. Modern containers are not suitable for the Flexi-Van flatcar â this was created for semi-truck trailer applications. 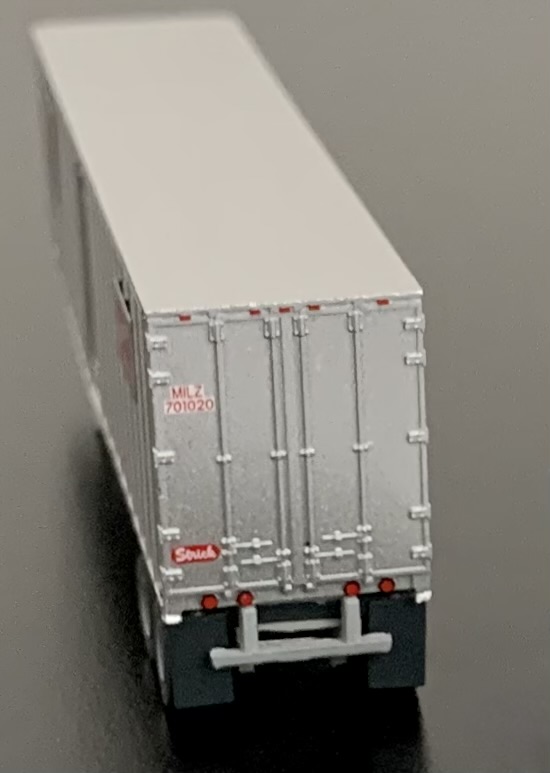 The underside of the flat car is basic with no detail partsâ much like the prototype. Since the skeleton flatcar has a low-profile to the ground â the braking system (reservoir tank and brake cylinder) are side-mounted on the body of the heavy center spine. The model rides along on roller bearing trucks with blacken Fox Valley Models metal wheels. Both body-mounted magnetic knuckle couplers were aligned to proper height.

The metal skeletal flatcar is 6 1/2 inches in length and weighs 0.9 ounces without a load and 1.5 ounces fully loaded with two 40-foot Trainworx trailers (each trailer is 3 inches long and weighs 0.3 ounces). The National Model Railroad Association (NMRA) recommendation is 1.52 ounces for this size car. The well-balanced metal skeleton flatcar rolls smoothly â a great running railcar with or without loads on straight track. The length of the flatcar makes for difficult navigation through twists in the road and around curves with a radius less than 12 inches (the larger the turn radius â the better for this model). No issues operating at slow and medium speeds on Kato Unitrack. The trailers marginally wobbled passing turnouts and around curves.

Trainworx produced an exceptional representation of the short-lived Flexi-Van flatcar and truck trailer piggyback period. Top-notch from the packaging to the well-crafted diecast metal railcar with true prototypical design. Great running, balanced model with the only drawback being the lack of movement allowed through tight twists and curves. I highly recommend the Trainworx Flexi-Van models for those operating layouts during the 1960âs or those looking to add something unique to spark some interest and conversation about a long-forgotten era in railroad logistics history.