Beginning in October 2012 and continuing throughout the year 2013, the Burlington Northern Santa Fe Railway (BNSF) unveiled a series of Trinity 5161 and Greenbrier 5188 cubic foot hoppers commemorating their heritage with special paint schemes. Each former railroad found on the BNSF family tree had three covered hoppers painted light grey (unlike the common BNSF mineral brown color) with their logo adorned on both sides of the railcar. The hoppers were repainted at the BNSF Havelock Yard car shops in Lincoln, Nebraska and released to great fanfare amongst the railfan community. InterMountain Railway issued a complete collection of these hoppers in the summer of 2020.

The InterMountain Railway Burlington Northern and Santa Fe Heritage Series is available in nine different paint schemes. A total of 28 different road numbers were produced with three unique hoppers created for each scheme except for the Colorado & Southern Railway â which has four cars (more on that later). The InterMountain hoppers are stamped with the real-life road numbers used by BNSF.

All railcars were sold individually with a suggested retail price of $34.95. My review includes observations of BNSF 486116 â Burlington Route Heritage. * Covered hopper BNSF 486868, decorated for the Colorado & Southern, was involved in an accident on the Montana Rail Link at Billings, MT in April of 2014. The railcar was rumored to have been scrapped. BNSF 488312 was painted to replace the damaged car.

Open hoppers were a common freight car since the 1800âs, used to carry products that did not need protection from the wind and rain such as coal and stone. The railroads were simultaneously looking for a more efficient method of shipping consumer bulk dry goods that were commonly bagged and loaded into standard boxcars. This routine had proved inefficient as it was time consuming, and a great deal of product was either damaged or wasted. The railroad industry began to experiment with converting open hoppers by adding a waterproof top and outlet gates on the bottom. The car manufactures saw an opportunity and met this demand by introducing the first purposed-built covered hoppers to streamline the process of shipping such goods as: flour, sugar, starch, plastic, feed, and fertilizer.

Pullman-Standard began to produce covered hoppers in the mid-1930âs. Most of these cars were two-bay, 50 or 70-ton hoppers designed to transport cement and carbon black as well as lime, sand, and phosphate. The covered hopper simplified the hauling process by allowing the product to fill the freight car through roof hatches (30â or 36â square shaped at first) and discharge out the hopper gates.

Covered hoppers are often identified by the number of compartments or outlet bays and their cubic foot hauling capacity. The more outlet chutes made available, the quicker the unloading times. The smaller two-bay cars carry heavier commodities such as sand and cement. The three-bay hopper is popular with the grain industry and the larger four-bay hoppers haul the lighter weight cargo of plastic pellets and chemicals. The grain boom of the 1960âs ushered in the three-bay, 100-ton capacity covered hopper to service the moisture sensitive agricultural product. The 100-ton hopper, along with its larger 110-ton counterpart, are commonly used today to service the grain industry.

In 1995, Trinity Industries introduced a 110-ton, three-bay covered hopper that quickly became the most popular grain car to date, with over 27,000 built â approximately Â¾ of these cars are privately owned. The new center-sill car - the Trinity 5161 - primarily used for dry bulk items like grain, sugar, or dry chemical service, had distinctive spotting features: curved sides (unlike the Pullman-Standard ribbed, exterior post design), rounded platform end cutouts, straight side sills through the ends, roof lip overhanging the sides and eight full width welded panels on each side of the railcar.

Atchison, Topeka & Santa Fe: Chartered in 1859. The nationâs seventh largest railroad during the onset of the 1990âs merged with the second largest rail system in 1995 forming the Burlington Northern Santa Fe Corporation.

Chicago, Burlington & Quincy: Chartered by the Illinois General Assembly in 1848 as the Aurora Branch Railroad. Renamed the CB&Q in 1855. The Great Northern and Northern Pacific gained control of the railroad in 1901.

Colorado & Southern: Started in 1898 â the Chicago, Burlington & Quincy acquired 2/3 control of railroad in 1908. Parent company of the Fort Worth & Denver Railway. The C&S merged with the Burlington Northern in 1981.

Fort Worth & Denver: The âDenver Roadâ existed from 1891 to 1982, operating predominantly in the north Texas region. Merged into the Burlington Northern in 1982.

Northern Pacific: A transcontinental railroad that operated from Minnesota to the Pacific Northwest during 1864 to 1970. Given forty million acres of land grants, President Ulysses S. Grant drove the "golden spike" in Powell County, Montana on September 8, 1883 â linking the Great Lakes to the Pacific Region. The Northern Pacific merged with other lines to create the Burlington Northern Railroad in 1970.

Spokane, Portland & Seattle: Chartered in 1905 by railroad magnate, James J. Hill, to conjoin the two railroad systems owned by him, the Great Northern and Northern Pacific, to capture a share of the northwest lumber trade. Merged into the Burlington Northern in March of 1970.

St. Louis-San Francisco Railway: Nicknamed the âFriscoâ - operated in the Midwest and South-Central United States from 1876 to 1980 before being purchased by the Burling Northern. Despite its name, the railroad never reached California â let alone San Francisco.

The ready-to-run covered hopper comes packaged in a clear plastic jewel case with a slip-off cover and a white two-piece plastic cradle to support the model. The model information is clearly labeled on the end of the case for ease to locate when in storage. A plastic sheet was wrapped around the car to protect the model from scuffmarks. No additional pieces were found inside the box. 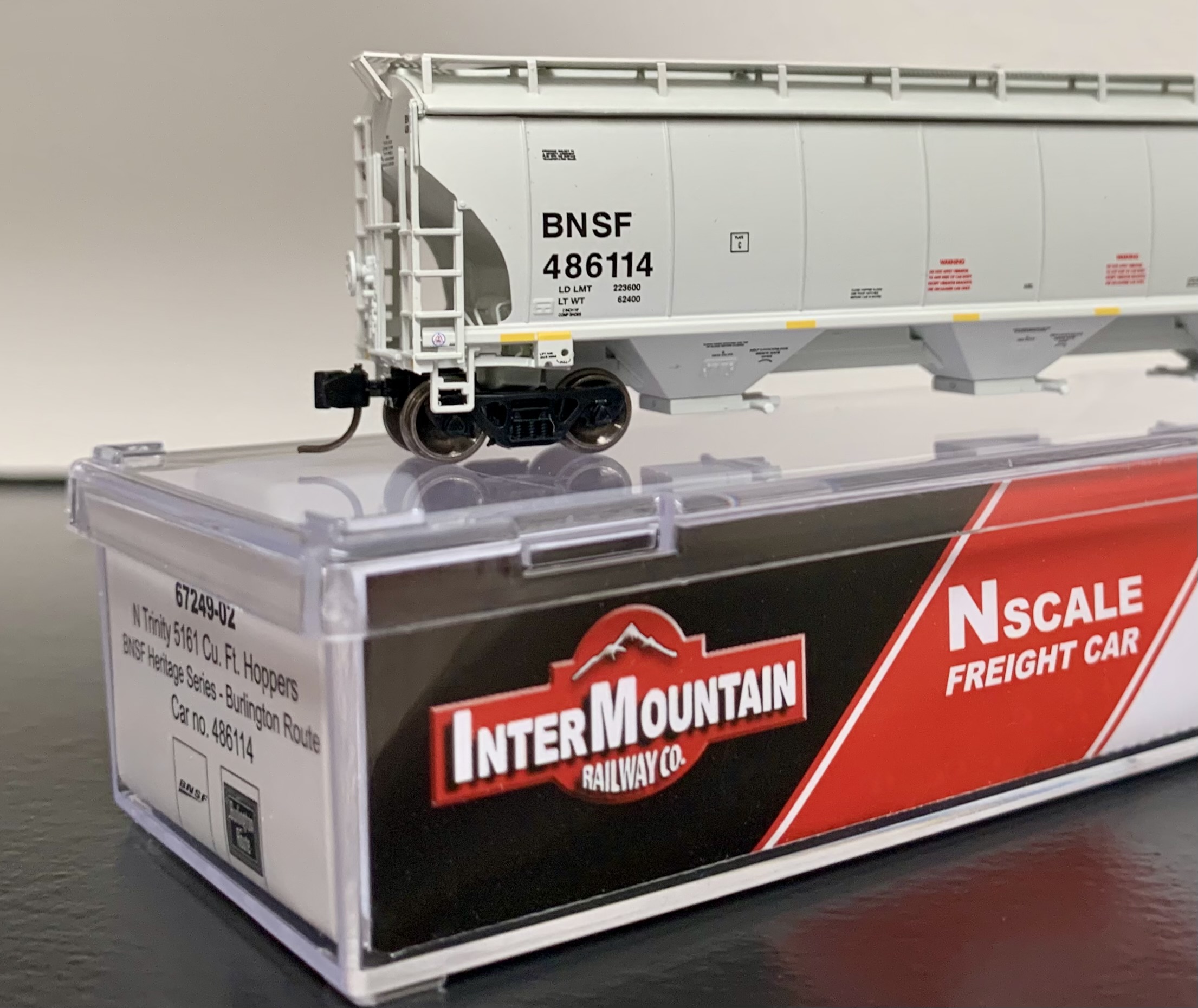 The light grey paint job is crisp and even along the entire injection molded plastic model. The distinguished red and black rectangle Burlington Route logo is proudly displayed on the hopperâs far right-side panels. Lettering is extremely neat and clear, even when some magnification is needed for the smaller printing. All diminutive letters and numbers are readable â and this leads us to discover another model railcar with an identity crisis... the âREALâ BNSF covered hopper #486114 is NOT a Trinity 5161 but a Greenbrier 5188 covered hopper car.

While most of the painted heritage hoppers were indeed Trinity 5161 models, the Greenbrier railcar was used for cars featuring Burlington Northern, Burlington Route (Chicago, Burlington & Quincy) and Fort Worth & Denver insignias.

A few distinguishing spotting features that highlight the differences between these two production models include the Trinity 5161 (and InterMountain model) eight full side panel construction and rounded end slopes near the platforms. The prototype BNSF 486114 (Greenbrier 5188) displays a ten-panel side configuration with straight-line end slopes. The main clue that identified this imposter was the InterMountain model stamped with 5188 cubic feet in the data field. 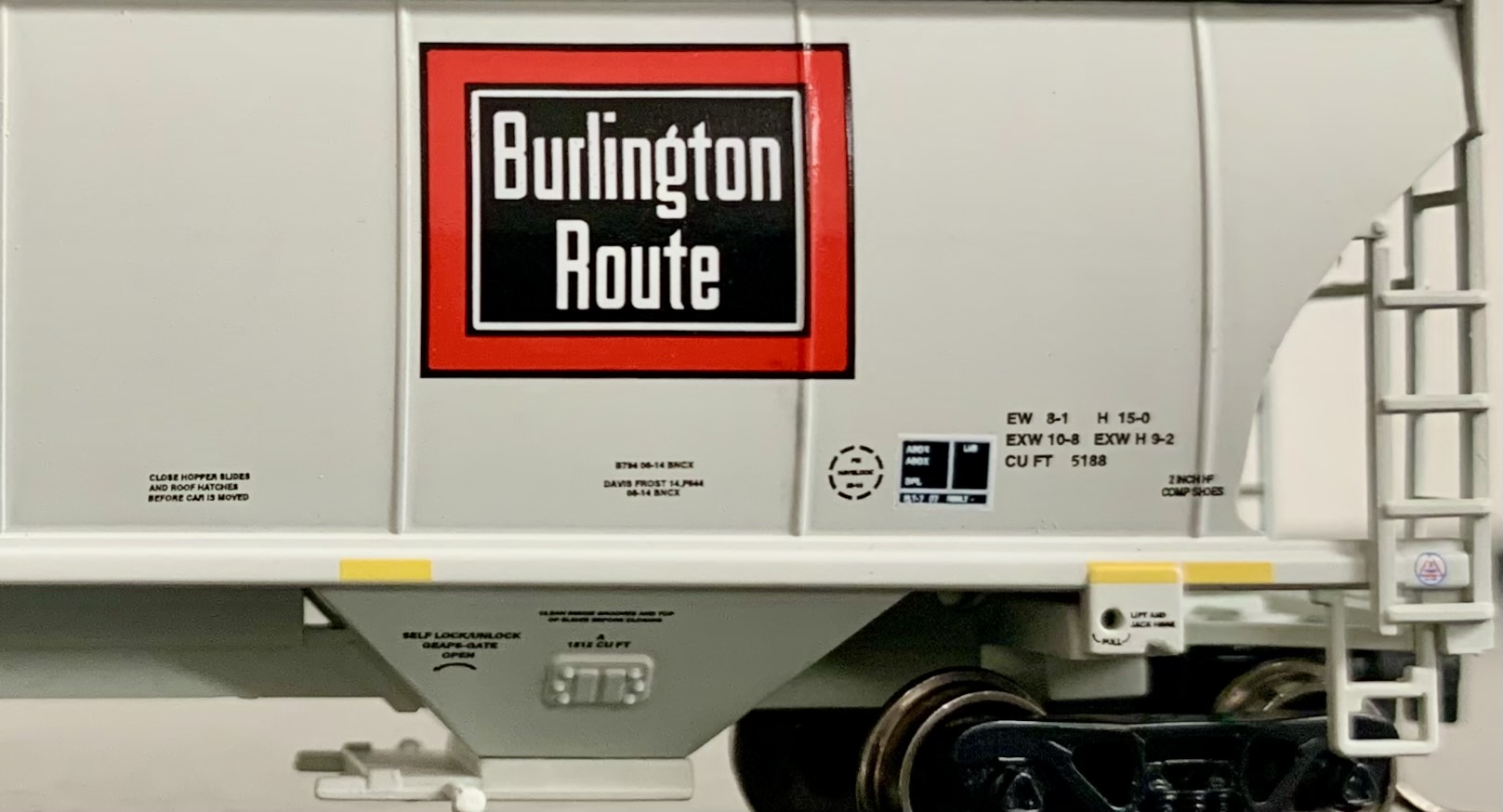 I will continue this review, for sake of easiness, and assume all InterMountain Heritage covered hoppers are Trinity 5161 models.

Significant components found on the sides of the InterMountain Trinity 5161 model include: the jack or lift pads found below the first full panel on both ends of the car, two platform end ladders, reflective yellow conspicuity stripes and the AEI (automatic equipment identification) tag located below the road number. The Trinity trademark narrow side sill extends through the platforms with two step stirrups on each end. Finally, the characteristic Trinity roof lip overhanging the sides is present on the InterMountain hopper car.

The âAâ end of the railcar features the reporting marks on the top right corner, one full ladder, and a plastic cross-over platform. The top left corner warns of no side ladders. The platform cage is also plastic with molded air brake pipe detail. The âBâ end has the same appearance but also includes a brake valve with tubing on the platform and an Ellcon National hand brake wheel with a molded chain. 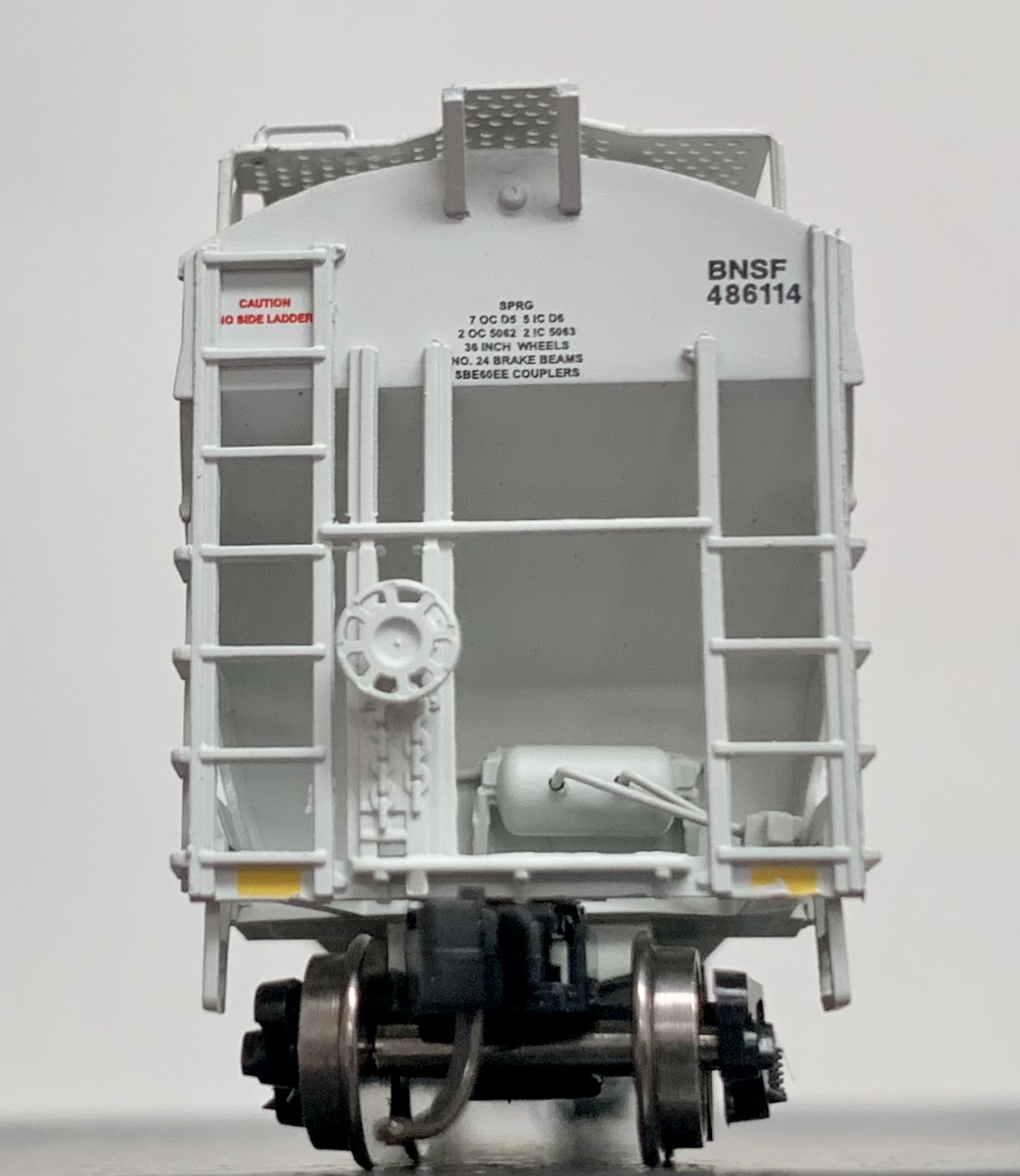 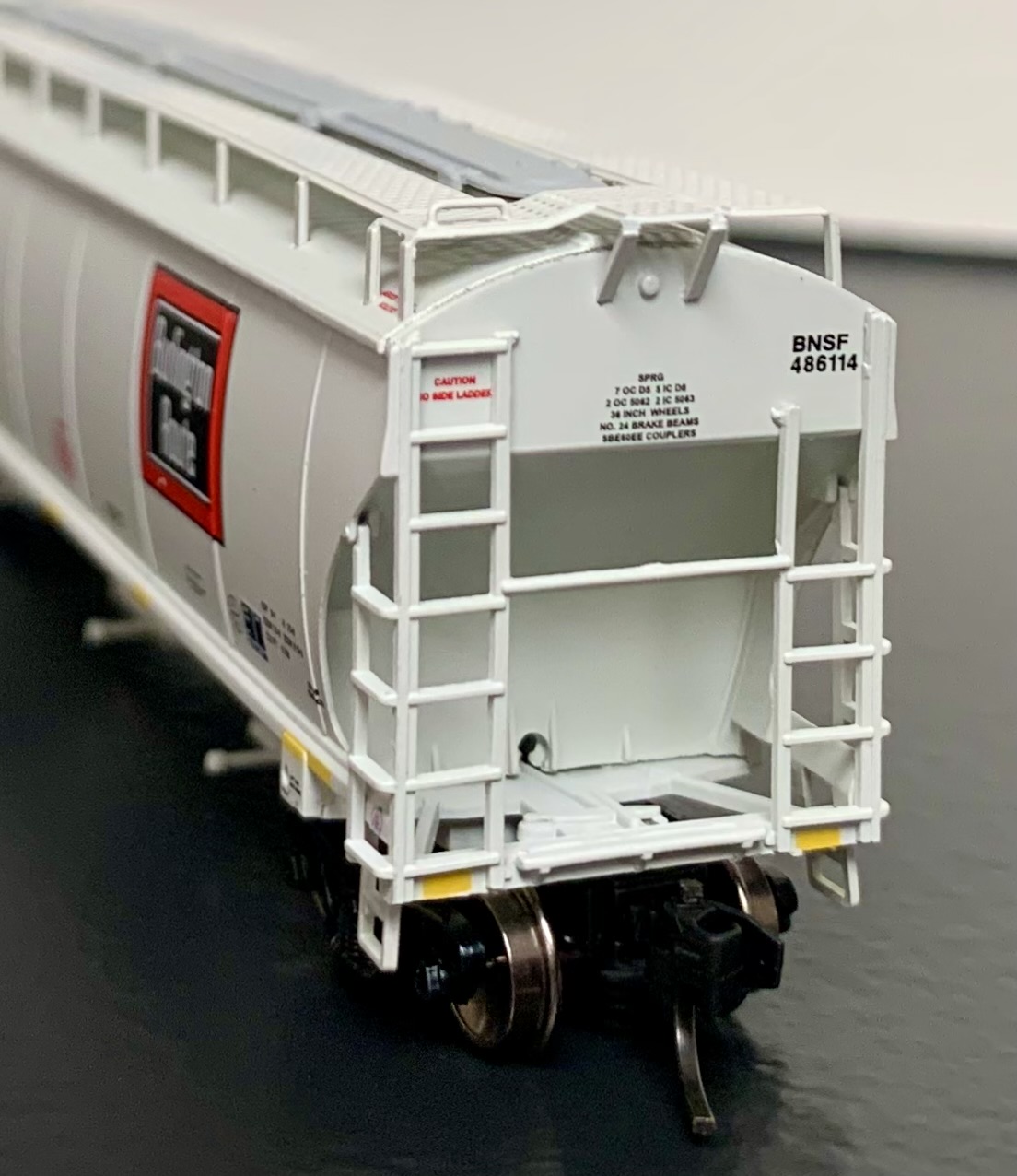 The top of the covered hopper has an intricately detailed Morton see-through metal etched roof walk for crew members to access the loading trough. The Morton brand running boards have a unique punch hole circle pattern. The center loading trough has the proper four separate panel hatch design with hinges. Last, separately applied grab irons are positioned at each car end, along with a warning in red letters - âCAUTION - NO SIDE LADDERS.â 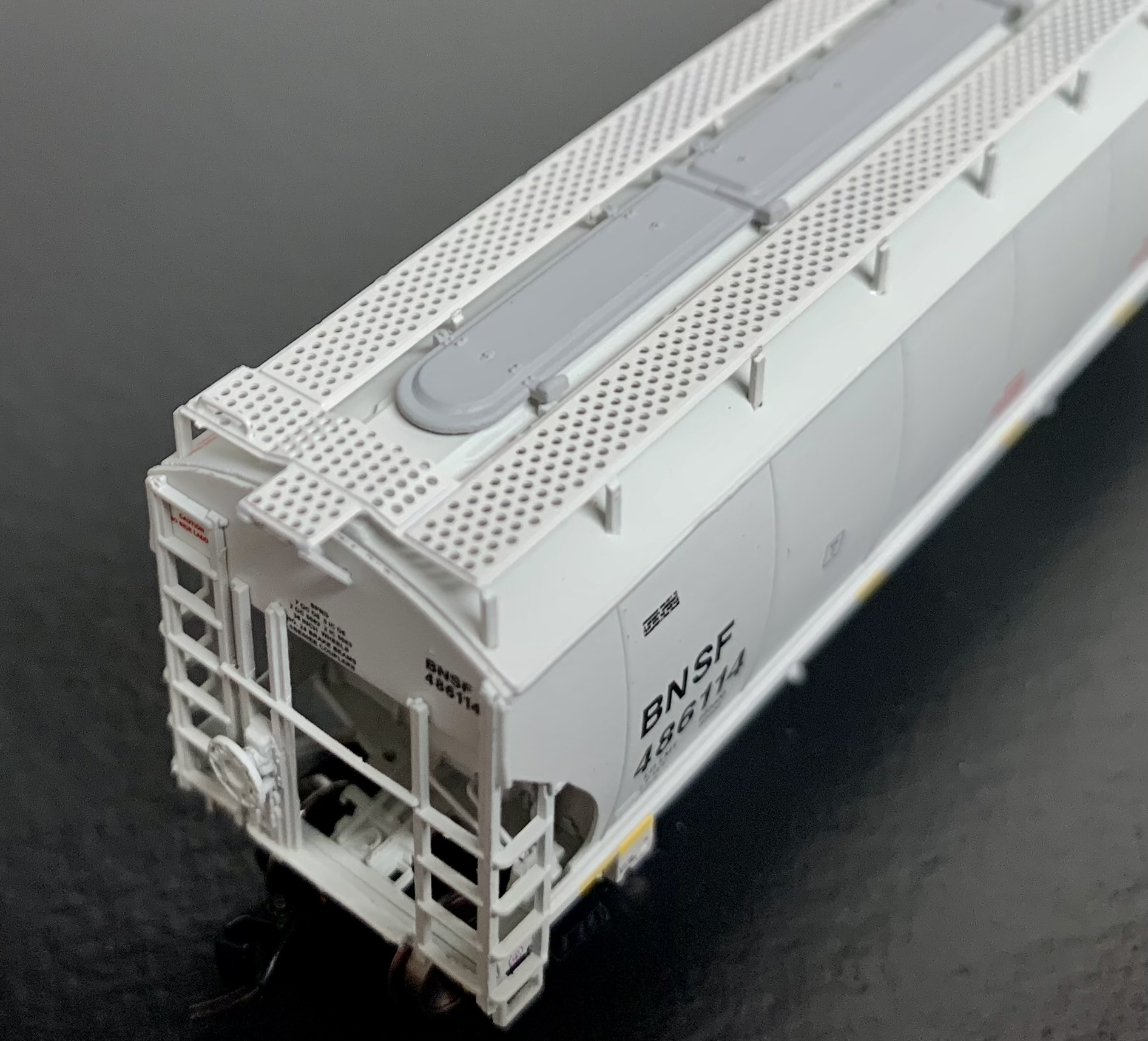 The car is 4 1/4 inches in length and weighs about 1.2 ounces, which is perfect according to the National Model Railroad Association (NMRA) recommendations (which are 1.1 - 1.2 ounces for this size car). I found it a smooth runner while testing the car on Kato Unitrack with no issues around curves or through turnouts at slow and medium speeds.

InterMountain Railway produced another excellent line of railcars â a prototypical correct Trinity 5161 hopper that is a great running, well balanced model with nice features (metal wheels, etched metal roof walk and meticulous outlet bay detail). Now for those hobbyists who wish to run only real-life accurate equipment â we have a slight problem. BNSF also used Greenbrier 5188 covered hoppers in their heritage collection â InterMountain inaccurately released a generic Trinity 5161 model to represent all 28 specially painted hopper cars. If you can look the other way, a few of these together would look great zipping around on a long grain unit train.