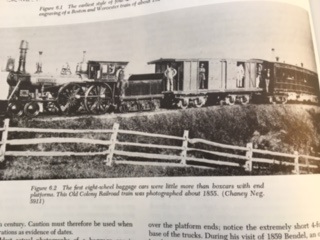 The first baggage cars were basically
boxcars with end platforms. This Old Colony Railroad
train was photographed about 1855.
(courtesy of "The American Railroad Passenger Car," White)

In the 1830s, during the early days of railway travel, train journeys were short because of the fragmented nature of the different railroads. However, this did not preclude many passengers from carrying baggage and packages with them that railroads needed to somehow store and transport.

Baggage Hauling Headaches
Because of the lack of storage space in each car, the bulk of this baggage was carried on top of coaches. This system delayed the train because it was time consuming; it also damaged coach cars and created extra work for the train crew.

To address these problems, some railroads (the Philadelphia and Columbia) added baggage storage (possum-belly) compartments to the floor of cars. Although these compartments made it easier to load and unload baggage, it was costly to outfit cars with these new features, which had limited capacity.

The Answer is a Separate Car!
Eventually the railroads could no longer ignore the need for separate baggage cars. Unfortunately, there isn't a great deal of information about the earliest baggage cars. According to the American Railroad Passenger Car, Part 2 by John H. White, Jr., published references of the time, such as a January 19, 1833 American Railroad Journal front page article, refer to the destruction of a Newcastle and Frenchtown baggage car and its contents due to a fire. However, the article does not describe the car itself.

August Mencken's The Railroad Passenger Car states that in September 1833, when the Camden and Amboy Railroad and Transportation Company pulled its first trains with an engine (instead of horses), a baggage car made up part of that train. (The Camden and Amboy was the first railroad to operate in New Jersey; it was chartered specifically as a commuter rail and ran across the state of New Jersey connecting New York and Philadelphia -- three important commercial centers of the time.)

Fellow TrainBoard Member to the Rescue
Although we were able to find images of a Camden and Amboy passenger car of the 1830s (we feature one in our blog, What is a Monitor Roof Passenger Car?), finding an image of a baggage car for this RR / time period proved much more challenging. We are happy to report that after we posted this blog on TrainBoard,) a fellow member (r_i_straw / Santa Fe Route) shared the picture below with the following comment: "Here is my totally wild ars guess as to what an early baggage car might look like. I modified an Overton car." He has graciously allowed us to use the image, for which we are very grateful. 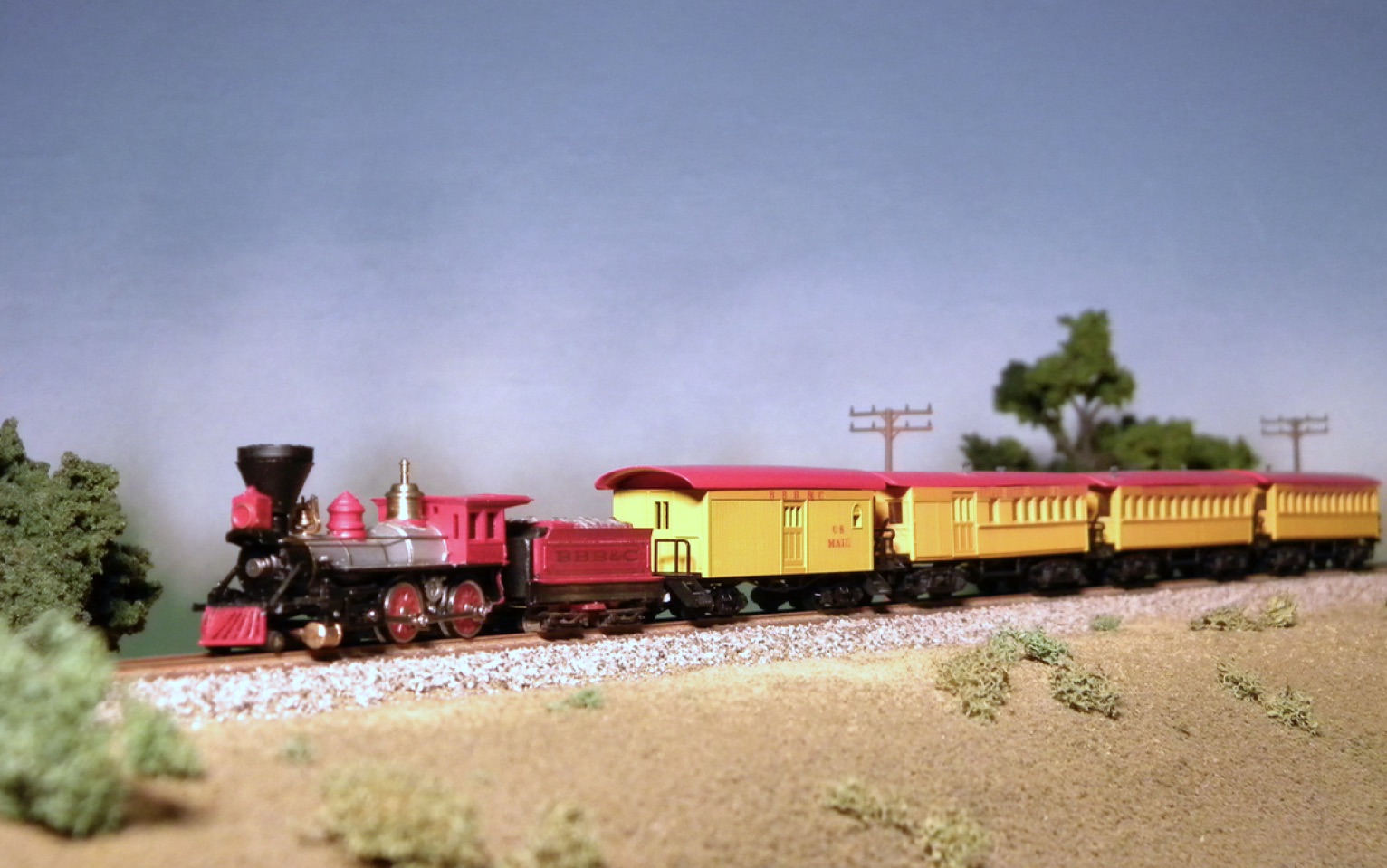 Modified Overton train cars created
by TrainBoard member, r_i_straw / Santa Fe Route.
Instead of a monitor or clerestory-style roof,
these cars were modified to feature an
arched roof, which pre-dates the monitor roof (seen below
on the Baltimore and Ohio mail and baggage car).

Both authors report that in 1834, the Baltimore & Ohio RR introduced baggage cars. A late 1833 Baltimore and Ohio RR annual report stated: "The conveyance of baggage on the tops of passenger-cars has been attended with so much labor and inconvenience in loading, unloading and shifting the baggage at so great a height, added to the manifest injury done the cars in the hurry and bustle of these operations, that the necessity of some improvement on the present plan is obviously indispensable."

Baggage cars were similar to a boxcar and built to look like passenger cars. They featured sliding doors, which made it easier for baggage handlers to load and unload items. Baggage cars were typically located behind the locomotive at the front of the train. (Mail and express cars were also commonly placed at the front of the train and all three train cars are referred to as head-end cars because of this location). 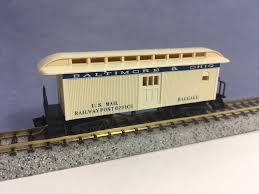 Double Duty for Baggage Cars
It was very common for some baggage cars to serve double duty. Some also accommodated passengers and some were also used to transport the U.S. mail (see picture above, which features a baggage / mail car from the TroveStar N-Scale database). This Overton 34' baggage car saw service in the 1860s; it has a Monitor or clerestory-style roof, which was introduced in the early 1860s as a way to provide ventilation to sleeping cars). You can read more about this style roof in What is a Monitor Roof Passenger Car?
Click Here for all Articles on N Scale Model Trains