Please help support TroveStar. Why?
One of these sold for: 12.95 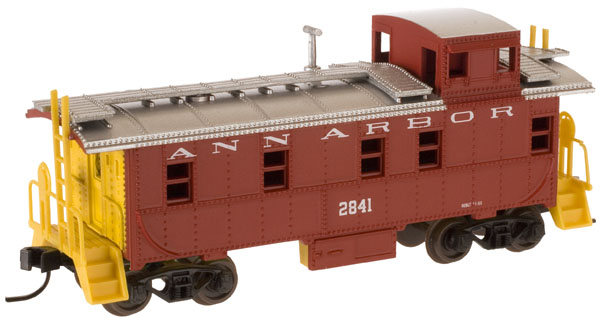 The Ann Arbor Railroad (reporting mark AA) was an American railroad that operated between Toledo, Ohio and Elberta and Frankfort, Michigan (about 294 route miles) with train ferry operations across Lake Michigan. In 1967 it reported 572 million net ton-miles of revenue freight, including 107 million in "lake transfer service"; that total does not include the 39-mile subsidiary Manistique and Lake Superior Railroad.

The railroad company was chartered September 21, 1895 as successor to the Toledo, Ann Arbor and North Michigan Railway. In 1905 it was acquired by the Detroit, Toledo & Ironton Railway (DT&I), which went bankrupt three years later and had to sell off the Ann Arbor.

For many years the Ann Arbor was owned by the Wabash, but Wabash gave up control in 1963 as part of its absorption into the Norfolk and Western. The DT&I, by then itself owned by the giant Pennsylvania Railroad, again gained control in 1963. The combined DT&I and AA were operated as independent subsidiaries of the PRR but suffered from the parent company's ill-fated 1968 merger with the New York Central. Upon the resulting Penn Central's 1970 bankruptcy, the DT&I and its Ann Arbor subsidiary were sold off to private investors.

After itself going bankrupt in 1973 the Ann Arbor ceased operations as a railroad on April 1, 1976, when the Consolidated Rail Corporation (Conrail) temporarily took over. Since Conrail only wished to operate the south end of the AA, the state of Michigan acquired the entire line, and operations were transferred to the Michigan Interstate Railway, a division of the Michigan Department of Transportation (MDOT), on October 1, 1977. The state eventually privatized this entity, selling it off in pieces to several different short-line railroad companies.

On October 7, 1988 a new Ann Arbor Railroad began operating the portion south of Ann Arbor; the Great Lakes Central Railroad now serves the remaining portions of the line. Some sections have been abandoned: from Yuma to Elberta and Frankfort (approximately 45 miles), about 10 miles in Shiawassee County, Michigan (in three discontinuous sections), and the trackage around the now-demolished Cherry Street Station in Toledo.