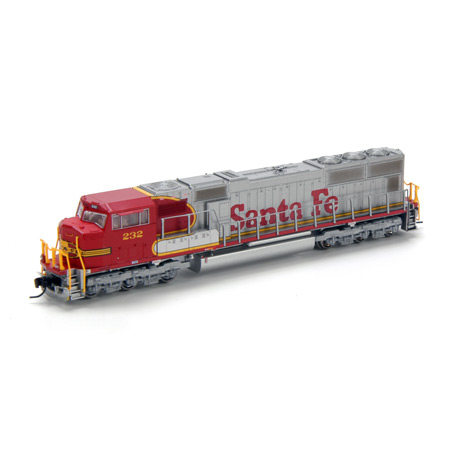 
Model Information: Athearn introduced the SD70M and SD75M in 2005. They followed up in 2006 with the SD70I and SD75I. All four versions share the same mechanism and apart from minor difference all four have similar shells as well. The model was developed for Athearn in Korea by Ajin.


DCC Information: The DCC friendliness, at least for the early versions of this model, really blows. Despite the split-frame design, I would qualify the upgrade process as "a bear". Definitely a caveat emptor type of thing. Some of the later versions are truly DCC-Ready, but there is no clear cut-off date or model number. You just have to take the shell off and look inside. Sorry. Later "drop-in capable" models will accept a Digitrax lightboard: the DN163K1C

The EMD SD75M is a series of diesel-electric locomotives produced by General Motors Electro-Motive Division between 1994 and 1996. The series was a response to General Electric's Dash 9-44CW. By increasing up the output of the 16-710-G3 engine from 4,000 to 4,300 horsepower (3,000 to 3,200 kW), the SD75 was a reality. The "M" in the model designation is the style of the cab, in this case the North American style cab. The SD75I has an "Isolated Cab", or a "WhisperCab" in EMD speak, which reduces noise and vibration in the cab. Both models use the HTCR radial truck and are mounted on the 72-foot-4-inch (22.05 m) frame. This model only sold 76 units and was not as popular as the SD70. The biggest buyer of this model was the Atchison, Topeka and Santa Fe Railway, now Burlington Northern Santa Fe, with 51 units; an additional 25 were delivered in early 1996, during the merger process. The Santa Fe's SD75Ms were the railroad's last new locomotives, with the very last new unit, number 250, built in August 1995.

Mainly built for a special request from Santa Fe/BNSF, the SD75Ms are slightly more powerful than SD70Ms, having horsepower ratings between 4,300 hp (3,200 kW) & 4500 hp. They are almost identical to SD70Ms, but can be distinguished by the added bulge below the inertial air-intake on the right side of the unit.