12.99One of these sold for an average price of: 12.99
Click to see the details
history
This item is not for sale. This is a reference database. 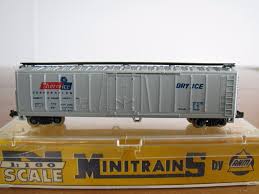 Specific Item Information: The printing on this item says "IL 40-0" but it is obviously a scale 50' reefer. Both models I have seen have a broken last number of the road number and it is unclear if it is a 0 or possibly a 3.


Model Information: Produced by Roco and imported by AHM, this 50 Foot Mechanical Reefer was released in the late 1960s and early 1970s.