23.973 of these sold for an average price of: 23.97
Click to see the details
history
This item is not for sale. This is a reference database. 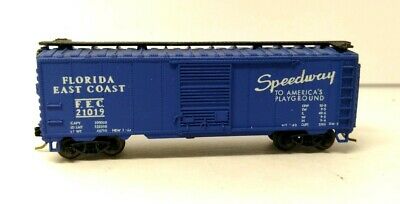 Model Information: These cars were made for Atlas by Roco in Austria in 1967. They resemble the later PS-1 model released in 1976 but the two toolings are sufficiently different, that we choose to categorize them separately. They were marketed in the early Atlas catalogs as "Box Cars". 6 different road names were introduced in 1967, and a 7th, Vermont Railways (MPN 2207) appeared in the 1971 catalog but was never released.

These cars were *also* imported by AHM as 'PS-1 40 Ft. Boxcars". For this reason and the fact that Atlas clearly markets their 1976-vintage replacement model (which looks VERY similar to this one), we have assigned the PS-1 prototype to this model.