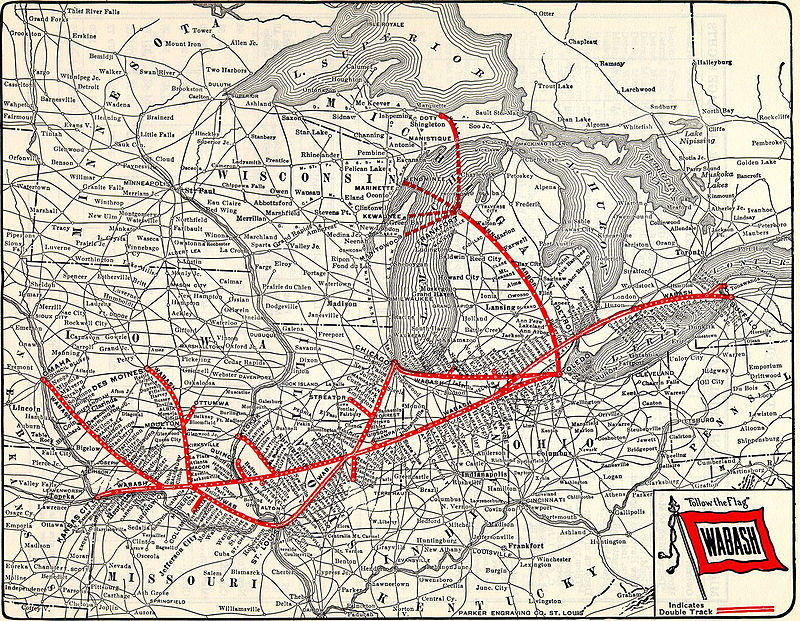 Company History: Wabash was the product of an 1889 restructuring (under the leadership of Jay Gould) of several railroads centered around the Wabash St. Louis & Pacific. Wabash was unusual in that it evenly straddled the border between âeastern railroadsâ and railroads west of the Chicago-St.Louis-Memphis-New Orleans border. In the west, Wabash connected Kansas City, Omaha and Des Moines. Heading east from those points, Wabash reached St. Louis, Decatur, and Chicago. Then, clearly in the eastern territory, Wabash reached Fort Wayne, Detroit, Toledo and finally Buffalo. Total length was about 2500 miles. The Detroit to Buffalo line cut though southern Ontario, Canada on Canadian National trackage rights. That route also required a car float operation across the Detroit River. As a result, Wabashâs Buffalo traffic was a fraction of that of competitors Nickel Plate and New York Central. However, Wabashâs Detroit-Kansas City and Detroit-St. Louis service was a force to be reckoned with and well patronized by Michiganâs automakers. The Wabash Cannonball was the name of the daytime passenger run between Detroit and St. Louis. The song of the same name was a hit long before it was ever applied to the train itself. Wabash bought control of the Ann Arbor in 1925 and soon after, Wabash and Delaware & Hudson jointly bought control of the Lehigh Valley (Wabashâs principle connection in Buffalo.) This got the attention of the Pennsylvania Railroad who bought control of Wabash under the auspices of their âPennsylvania Companyâ subsidiary in 1928.