History: The Powder River Basin is a hot bed of coal activity. There is more coal run out of this one area than all other areas of the US combined. It is an amazing railfan opportunity, as there is train after train after train of 100+ cars leaving the basin for power plants all over the country. The trains pull through a mine and are flow loaded, with the train continuously moving at very slow speed, while the loader operator drops up to 110 tons of coal into each aluminum car. It is an awesome site to see. The flow loader piles the coal into the car, and each load settles to it's own shape. At the other end of the chain, many of the power plants or shipping docks (yes, some of this high quality cleaner burning coal goes overseas, too) unload the cars by rolling them over, while they are still coupled in the train. This is accomplished by use of a rotary coupler, which needs to be oriented correctly in the train in order to work. The orientation is accomplished visually by the unique colored end, or rotary end on the car. You will find these trains anywhere along their route with all of the rotaries lined up in the same direction. Each car is equipped with one rotary coupler, and one fixed coupler (the exceptions are the double rotary cars, which we'll get to in a second), so that the car can be rolled over without uncoupling. The most recent version of the car is constructed of aluminum for weight and strength reasons. The side stakes are a box shape of aluminum, and have distinctive crisp square corners. The earlier version of the car was made in steel, with folded steel "hat section" stiles that were thinner and rounder. Johnstown America is a pioneer in getting the most out of their materials. 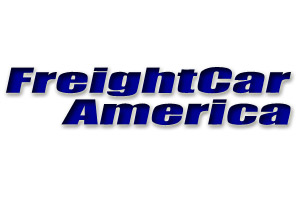