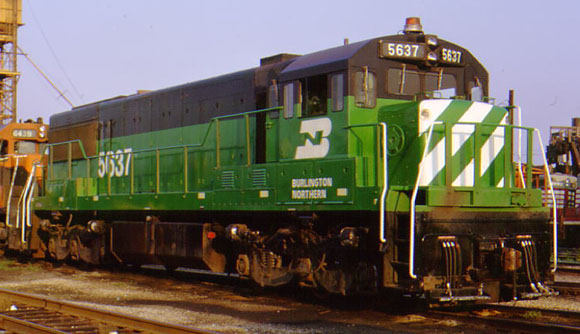 History: The GE U25C was General Electric's first independent entry into the United States domestic Diesel-electric locomotive railroad market for heavy production road locomotives since 1936. From 1940 through 1953, GE participated in a design, production, and marketing consortium (Alco-GE) for diesel-electric locomotives with the American Locomotive Company. Starting in 1956 GE launched its Universal Series of diesel locomotives for the export market. The U25C was the first attempt at the domestic market since its termination of the consortium agreement with Alco.

The origin of the U25C grew out of the need for six axle locomotives to operate on a 12-mile heavy haul railroad to construct Oroville Dam. The General Electric salesman to Oro Dam Constructors offered essentially a U25B riding on six axle trucks. When the salesman got back to GE's Erie Plant it was discovered that no six axle U25 was available, nor did GE wish to construct a domestic six axle road switcher until the horsepower threshold reached 3000 horsepower. Rather than lose the four unit sale GE quickly began a design of a six axle U25 that relied heavily on the U25B for engineering. The U25C was longer than the U25B by four feet four inches. The extra length was needed to accommodate the improved Trimount trucks. Completed in September 1963 the U25C was the first six axle unit of the second generation of dieselization. Following quickly on the Oro Dam Constructor's order was an order by Atlantic Coast Line for four U25Cs. The ACL also ordered the first four Alco C628s. Both of these ACL orders were delivered in December 1963.