Please help support TroveStar. Why?
17 of these sold for an average price of: 61.14 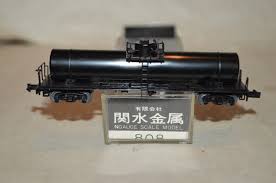 Specific Item Information: We don't really know if Kato ever produced an undecorated model of the popular Take 3000 model, but we know of at least one case where an aftermarket decorator repainted these in a North American paint scheme.


Model Information: This tank car is a regular inclusion in Kato freight starter sets. It also appears in mixed freight box sets. It is a nice model and sports low-profile chemically blackened wheels. The roof detail is excellent and these are durable and nice looking runners. The model (as explained to me by the Kato USA rep at the last ARS show I attended in January 2018) is of a Japanese prototype. Further research proved this is correct and that it is in fact a model of a Taki 3000 car from the late 1950s.