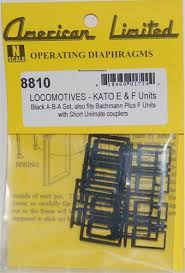 Model Information: This model was originally produced by Lima for AHM. They were later imported by PMI and Model Power. Model Power moved the tooling to China and updated it a little. The retooled cabooses are very similar to the earlier Lima product. They can be told apart by examining whether the bays in are separately applied parts. The original Lima version has the parts applied whereas the Chinese version has the bays as part of the body mold. The trucks are "snap-in" and do not use kingpins. This will make it difficult to swap out the trucks for modern MTL trucks - a coupler transplant will need to be done.

For Model Power releases, since it is not marked on the body shell where the model was made. However the boxes for these cabooses will clearly indicate whether they were made in Italy or Hong Kong.