Please help support TroveStar. Why?
2 of these sold for an average price of: 11.00 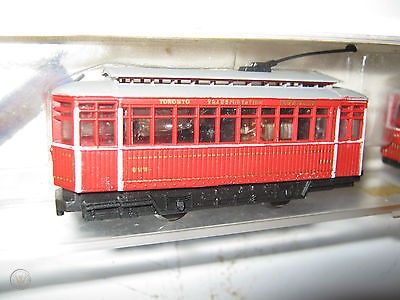 Specific Item Information: Introduced in the 1968 catalog - disappeared a couple of years after.
Non prototypical, based on a European coach car.


Model Information: Introduced in 1968 as the first N scale Passenger car of Lima in its Italian Az version, this body style was then used for several other European road names up until the early 1980's.
With a length of 138mm, this car is shorter than the UIC-Y prototype; it should be 153 mm at N scale (1/160) to be prototypically correct.
For a short period of time after 1968, this body style has also been used repainted with North American paint schemes, until Lima introduced more prototypically correct body styles of North American Passenger cars.

The UIC (Union International des Chemins de fer) type Y is a type of passenger car defined in UIC bulletin 567 together with UIC type X. Initially ordered by the Italian Ferrovie dello Stato (FS), with 24 manufactured, they have primarily been produced for the French SNCF with 1,327 manufactured from 1963 to 1976.
The East German railways (DR) derived their OSJD/OSShD type B cars to deliver from 1966 to 1970 a new series close to the UIC-Y, and then from 1969 a series of type Y/B 70 that is compatible to UIC-Y standards. These Eastern German cars have been acquired by several railways of Eastern Europe: : Czechoslovakia (ÄSD), Poland (PKP), Hungary (MÃV), Bulgaria (BDÅ½), Romania (CFR).
With a standard length of 24.50 m (80' 4-9/16")), they are shorter than the UIC-X and UIC-Z types. They are qualified for at least 120 km/h.
The east-German UIC-Y cars have a higher roof than the French and Italian ones.

From Wikipedia (in French)

See also these detailed articles (in Italian) for more information about both the prototypes and the N scale models: UIC-Y and UIC-Y from SNCF.