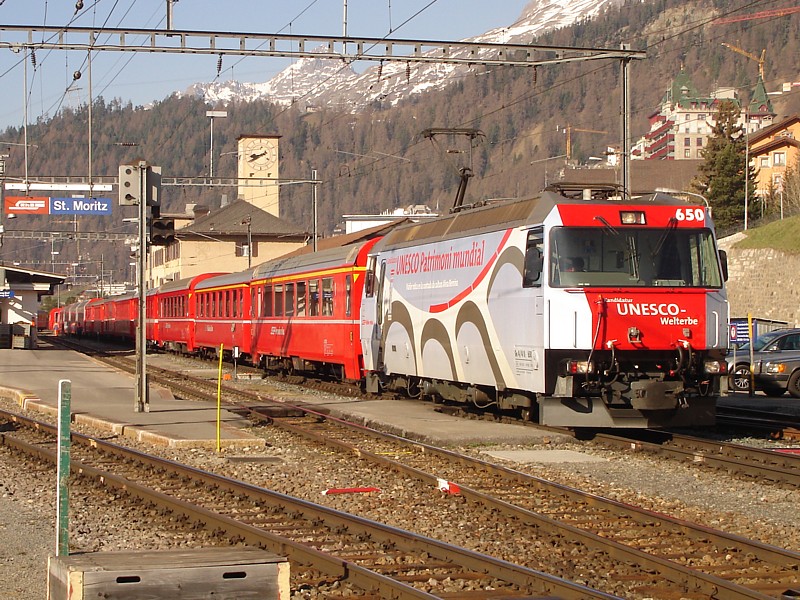 History: In order to manage the sharp increase in traffic on its network after the opening of the Vereina Tunnel, the Rhaetian Railway joined in 1989 with Swiss Locomotive and Machine Works and ASEA Brown Boveri, to develop a new generation of electric locomotives, the drive train of which was to be based upon AC technology with GTO Thyristors. The original plan for a six axle variant of the Ge 4/4 II, which would have had benefits on the nearly straight section of line through the tunnel, was rejected, in favour of a universally deployable locomotive with four axles, which could also be used on sections with tight radius curves. The result was the Ge 4/4 III class.

On 7 December 1993, the first Ge 4/4 III machine, no 641, was officially put into service. Between 1994 and 1999, eleven further locomotives followed, in three series, and were given numbers 642 to 652. The first of these further orders, made in 1989, consisted of six locomotives, and the second further order, in 1990, was for three. The third, placed with Adtranz in 1996, was intended to cover the additional demand due to the opening of the Vereina Tunnel, and was for another three machines.

The Ge 4/4 IIIs are now found at the head of almost all of the train sets on the Albula Railway, and they are the only locomotives used to haul car trains through the Vereina Tunnel. All of the locomotives in the class are currently decorated with colourful advertising liveries.