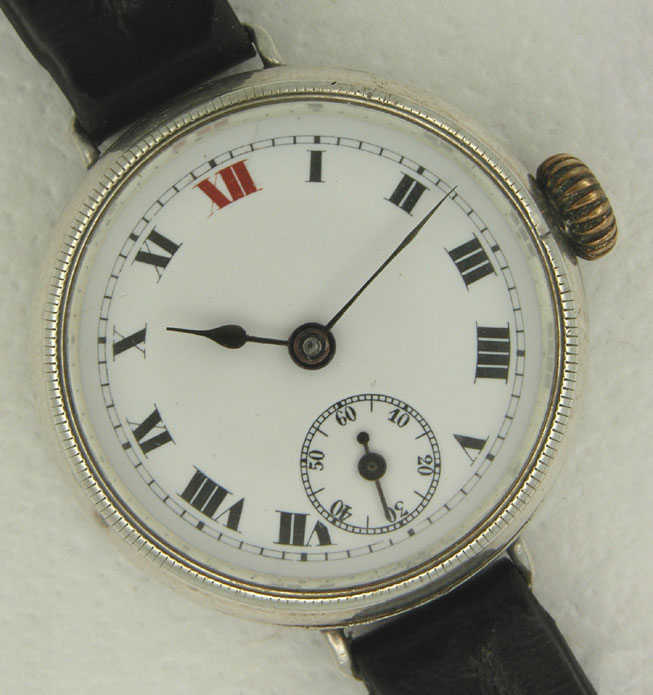 
Notes: Rolex WWI Era "Trench Watch", double signed (case & movement), screw front and back. Wristwatches from this period were frequently nicknamed "trench watches" after the trench warfare in which they were used during WWI

The Rebberg watch movement was named as such because the location of Aegler's factory was on a street called - you guessed it - 'Rebberg'. This is a lever escapement movement with a cut bimetallic temperature compensation balance with Breguet overcoil balance spring and 15 jewel bearings. It is stem wound and set. Savonette movements were used in savonnette (hunter) pocket watches, and in LÃ©pine (open face) wristwatches because they have the fourth wheel at 90 degrees from the stem. This allows the crown to be at three o'clock and the small seconds indication at six o'clock on the dial. Most of these movements were built with 15 jewels, but were occasionally made as a higher grade 17 jewel version.

This Aegler Rebberg movement carries the single name "Rolex" so this is a Rolex watch, not just a watch that was sold by the Rolex Watch Co. But notice that the Rolex brand name is engraved on the ratchet wheel. This is an easy component to change, just a single screw holds it in place. This was most likely an idea of Aegler's to reduce the amount of stock they needed to hold. They could cheaply hold ratchet wheels engraved with Rolex or any other name, and then when an order came in they could simply take unbranded movements and change the ratchet wheels to one with the name given on the order. This was a more cash efficient system than tying up lots of movements with names engraved on their bridges which then could only be sold to that customer.

The Rebberg movement had a good long run - 1902 to 1927, but it was eventually replaced by Aegler's new line - the Hunter.