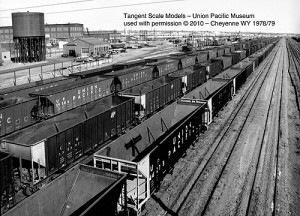 History: These cars represent UPâs largest fleet of coal hoppers in company history. First produced in 1974 by Bethlehem Steel as UP class H-100-10, production of a majority of the fleet occurred in UPâs Albina Shops in Portland OR between 1976 and 1981. Production of this important fleet ended with the H-100-23 class, after UP placed more than 6,400 of these âquadâ hoppers in service in the rapidly-growing Western low-sulfur coal market. These cars became the workhorses of the UP coal fleet, serving coal originations in Wyoming, Utah, Colorado, and the PowderRiver Basin, and sometimes on non-UP coal originations such as DRGW, Utah, and Wyoming & Colorado (former UP branchline). The DRGW origins became part of Union Pacific in 1996, and to this day these mines continue to load these UP quad hoppers!UPâs quad hoppers wandered both systemwide and to offline railroads as customers sourced coal from a variety of origins.

A sample destination to the west that received coal in these hoppers was Southern Californiaâs Kaiser Steel located in FontanaCA, as well as the bulk export terminal at San Pedro. Trains of quad hoppers for these customers operated over CajonPass with various motive power groupings, most notably mixed DRGW and UP power (plus helpers). A few sample eastern gateways in early years were the Commonwealth Edison Co. power plants at Waukegan IL and Hammond IN, Kansas City Power & Light at Kansas City MO, Illinois Central destinations for TVA in Kentucky, not to mention Eastern and Midwestern carriers both in carload (sourced for cement and other production purposes) and unit train services. These quad hoppers continue to serve, operating to customers without dedicated bank-owned coal sets, as well as services literally anywhere when customers in North America want to increase coal deliveries from UP sources. Finally, the quad hoppers have been spotted in non-coal services such as miscellaneous aggregates, coke, and sugar beet services.On this page we have included an updated gallery of prototype photos to show you some of the major paint schemes in service, a free service from Tangent Scale Models. We believe that an educated customer is a happy customer. All images below can be enlarged.