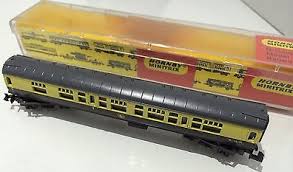 Model Information: This Mk1 Brake Composite Corridor (BCK) coach was introduced in 1969 by Minitrix in three different BR liveries. It was later released in an additional livery. It was available up until the mid-1990's when production of this model stopped.
Another type of Mk1 coach was introduced at the same time: CK (Composite Corridor).
They have been distributed in the UK as Hornby-Minitrix during the '70's for a short period of time, but mostly were available under the Minitrix brand.
Length between buffers: 134 mm