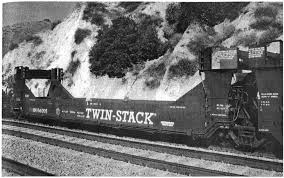 A well car, also known as a double-stack car or stack car (also well wagon), is a type of railroad car specially designed to carry intermodal containers (shipping containers) used in intermodal freight transport. The "well" is a depressed section which sits close to the rails between the wheel trucks of the car, allowing a container to be carried lower than on a traditional flatcar. This makes it possible to carry a stack of two containers per unit on railway lines (double-stack rail transport) wherever the loading gauge assures sufficient clearance. The top container is secured to the bottom container either by a bulkhead built into the car (e.g., bottom and top containers are the same dimensions of 40 ft.), or through the use of inter-box connectors (IBC). Four IBCs are needed per wellcar. In the process of an inbound train becoming an outbound train, there are four processes: unlock to unload the top container of inbound train, remove then unload bottom container, insert after loading bottom container of outbound train, lock after top container loaded.

Double-stack container trains first hit the rails for regular service in 1981. The Southern Pacific Railroad had developed the idea to provide service for the Sea- Land maritime shipping company. SP's pioneering double-stack service let Sea- Land's containers take a shortcut from the west coast to the Gulf of Mexico bypassing the Panama Canal. From prototype car to production order, the SP spent a little over four years on the double-stack development project. The SP's double-stack cars featured unwieldy bulkheads on each end to prevent the loose top container from blowing off of the car.

The support for the upper container came from inter-box connectors (IBCs) which had been used for years in oceangoing container shipping.

The Twin-Stack was the first entry of Gunderson into the well-car market. It was introduced in 1985. The car had 40-foot wells and can carry 45-foot container in the top end positions, but only 40-foot containers in the intermediate positions. Gunderson updated the design by removing the bulkheads to create the Maxi-Stack (later renamed Maxi-Stack I).