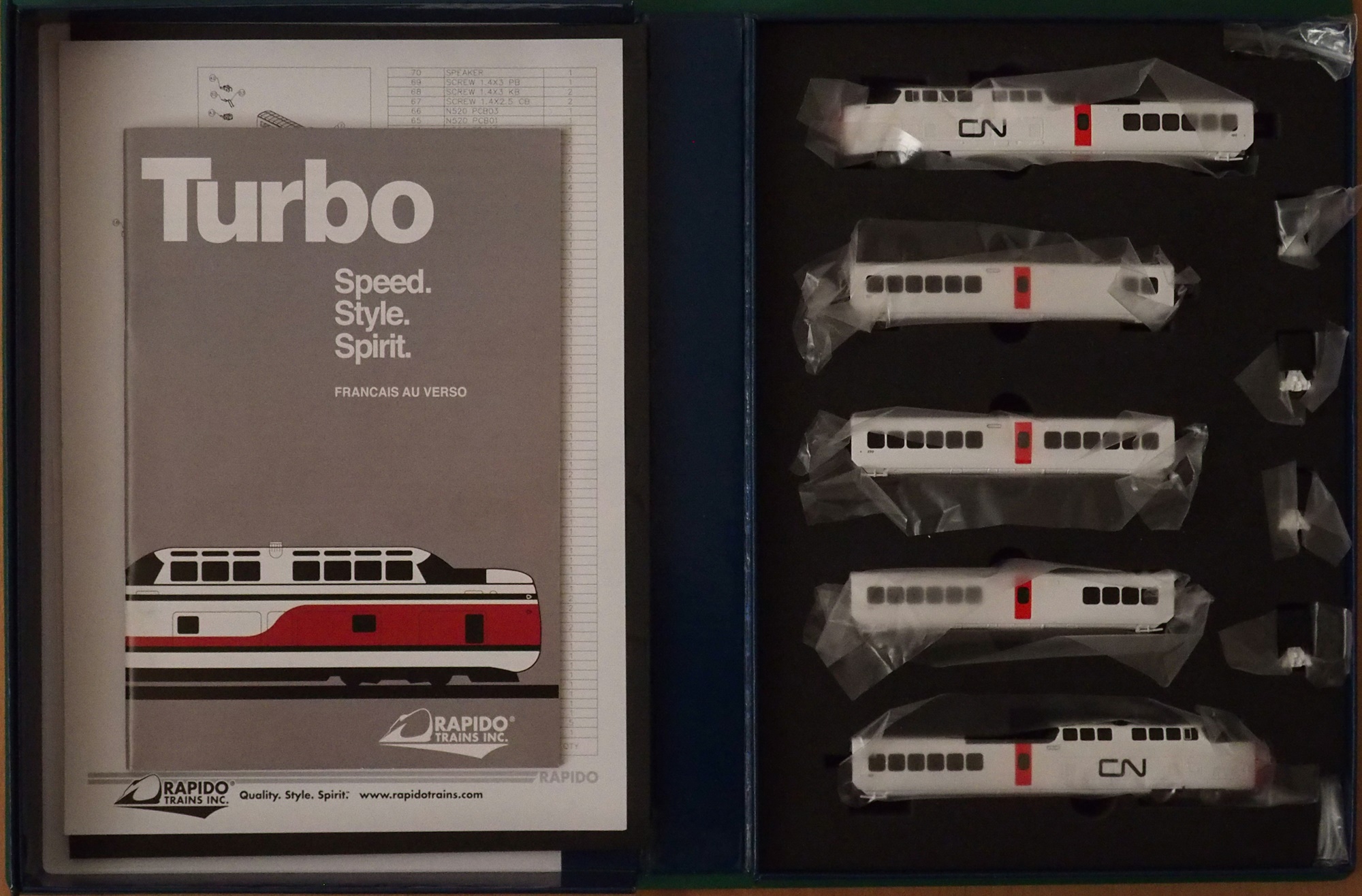 The United Aircraft TurboTrain is an important part of our railroad heritage. The Turbo was a high-speed passenger train that operated in Canada between 1968 and 1982 and in the United States between 1968 and 1976 (Amtrak disposed of the trains in 1980). To this day, it is the fastest production train in North American history. It achieved the American speed record of 170.8 MPH in 1967 and the Canadian speed record of 140.6 MPH in 1976, both of which still stand today.
The TurboTrain was designed and marketed by United Aircraft Corporate Systems Center (later Sikorsky Aircraft) as a gas turbine-powered, high-speed intercity train. Each train was powered by four or five Pratt & Whitney ST-6 gas turbine engines, with an additional gas turbine providing auxiliary power. The Turbo featured a unique pendular suspension over articulated single-axle trucks, which allowed the train to tilt in curves. That feature, combined with the short Intermediate Car length, meant that the Turbo could travel much faster than regular trains on conventional track. It was a high-speed train without the need to invest in high-speed train infrastructure.

A series of design studies carried out by Chesapeake and Ohio Railway in the 1950s used the second-generation Talgo design for their car suspensions. The suspension arms for each neighboring pair of cars were attached to a common bogie ("truck") between them, as opposed to having a pair of separate bogies for each car. The bogies rode the common curve between the two cars, centered by traction springs that centered the axle between adjoining car bodies. TurboTrain cars are 2 1â 2 feet (76 cm) lower than conventional cars, to lower the center of gravity in relation to the swinging point at the top of the arms. The arms included air springs to smooth out the motion, although it still felt "odd" while the train navigated short turns in switchyards and stations.

United Aircraft (UAC) purchased the C&O patents to enter into the DOT's Northeast Corridor Demonstration Project. The TurboTrain was designed by personnel of the Corporate Systems Center Division (CSC) of UAC, at Farmington, Connecticut. The design was similar to the original C&O version, but modified to use turbine power instead of diesel. The chosen engines were a modified version of the Pratt & Whitney Canada PT6 (also a UAC division) known as the ST6, downrated from 600 to 300 hp (447 to 224 kW). The PT6 uses a "free turbine" that acts as a torque coupler, so the new design did not require a transmission and was able to drive the powered wheels directly. The power cars had three engine bays on either side of the car and could mount engines in pairs for two to six turbines, depending on the needs of the carrier. Another ST6 drove an alternator to provide 'hotel' electrical power for the train. Each power car had a fuel capacity of 5,774 litres; 1,525 US gallons (1,270 imp gal).

The Turbo's final run was on October 31, 1982, when they were replaced by the all-Canadian LRC trainsets from Bombardier Transportation, which employed conventional diesel-electric locomotives. Although they had an early reputation for unreliability, according to CN's records, the rebuilt TurboTrains had an availability rate of over 97% for their careers with CN and Via. The LRC suffered from similar teething problems, notably with the tilt system locking the cars in a tilted position.

From Wikipedia
Read more on American-Rails.com and on Sikorsky Archives.