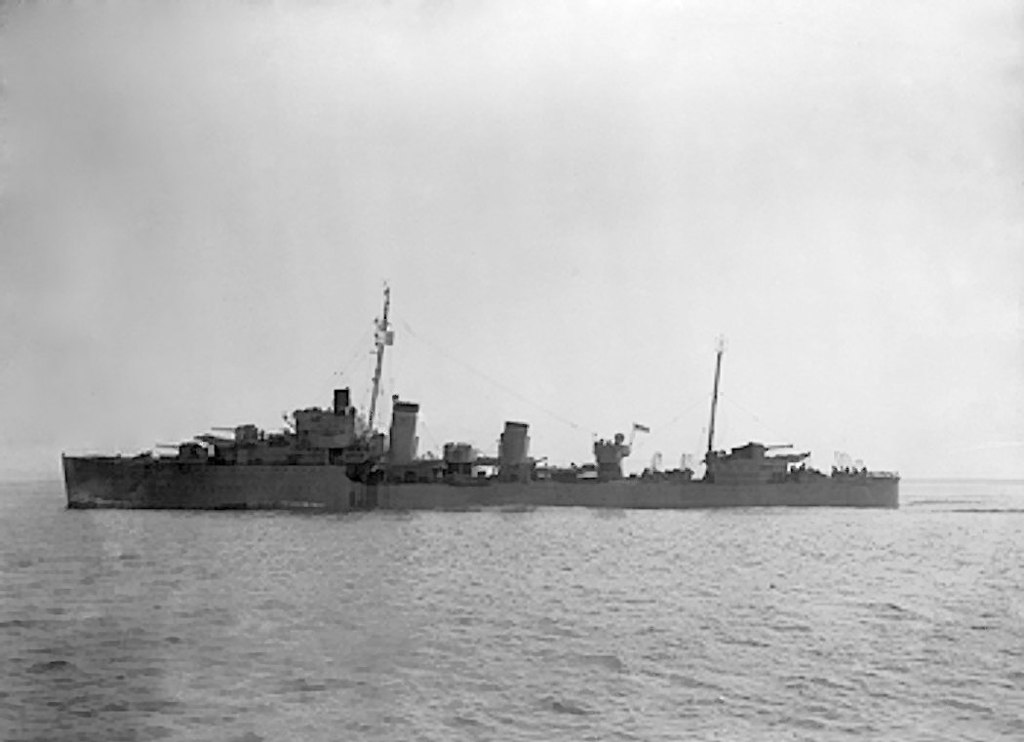 History: The C and D class was a group of 14 destroyers built for the Royal Navy in the early 1930s. As in previous years, it was originally intended to order a complete flotilla comprising eight destroyers?plus a flotilla leader as the ninth unit?in each year. However, only four ships - plus a leader - were ordered under the 1929?30 Programme as the C class. The other four ships planned for the C class were never ordered as an economy measure and disarmament gesture by the Labour government of Ramsay Macdonald. A complete flotilla - the 'D' class - was ordered under the 1930/31 Programme.

The five ships of the C class were assigned to Home Fleet upon their completion, although they reinforced the Mediterranean Fleet during the Italian invasion of Abyssinia of 1935?36 and enforced the Non-Intervention Agreement during the Spanish Civil War of 1936-39. They were transferred to the Royal Canadian Navy (RCN) in 1937 - 39 and spent most of their time during World War II on convoy escort duties in the Atlantic Ocean. Crescent was sunk when she was accidentally rammed by the British cruiser HMS Calcutta in 1940. Crusader was sunk by a German submarine in 1942, though she had sunk an Italian submarine in 1940. The other ships of the class sank three German submarines during the war. They were all worn out by the end of the war and were scrapped in 1946/47.

The D-class destroyers were initially assigned to the Mediterranean Fleet upon commissioning, but were transferred to the China Station in 1935. Like the C class, most were temporarily deployed in the Red Sea when the Italians invaded Abyssinia, but returned to the China Station when that was over. They were still there when the war began, but reinforced the Mediterranean Fleet shortly afterwards. Five ships were transferred to Home Fleet in December 1939, but Duchess was sunk en route when she was accidentally rammed by the battleship HMS Barham, and Duncan was badly damaged when she collided with a merchant ship, requiring lengthy repairs. Daring was sunk by a German submarine in February 1940. The other two participated in the Norwegian Campaign of April?June, but Delight was sunk by German aircraft in July and Diana was transferred to the RCN as a replacement for the Crescent after she was sunk by the cruiser Calcutta. However, she too was rammed and sunk several months later by a freighter that she was escorting.

The four ships that remained with the Mediterranean Fleet sank three Italian submarines in 1940 while escorting Malta convoys and larger warships of the fleet. Several participated in the Battles of Calabria and Cape Spartivento that year. Duncan joined Force H at Gibraltar in October and escorted that group. Dainty was sunk by German bombers in February 1941 and Diamond in April while evacuating Allied personnel from Greece. Defender had to be scuttled in July when she was crippled by a German bomber when returning from escorting a convoy to Tobruk. Duncan and Decoy remained on escort duties for the rest of the year before being transferred to the Eastern Fleet in early 1942. They returned to the UK late in the year to begin conversions to escort destroyers. Decoy was transferred to the RCN in early 1943, but both became convoy escorts in the Atlantic. They sank two German submarines before being assigned to the UK to protect Allied shipping during Operation Overlord. They sank three more submarines before the end of the war and were paid off in 1945. Duncan was scrapped 1945-49 and Decoy during 1946.