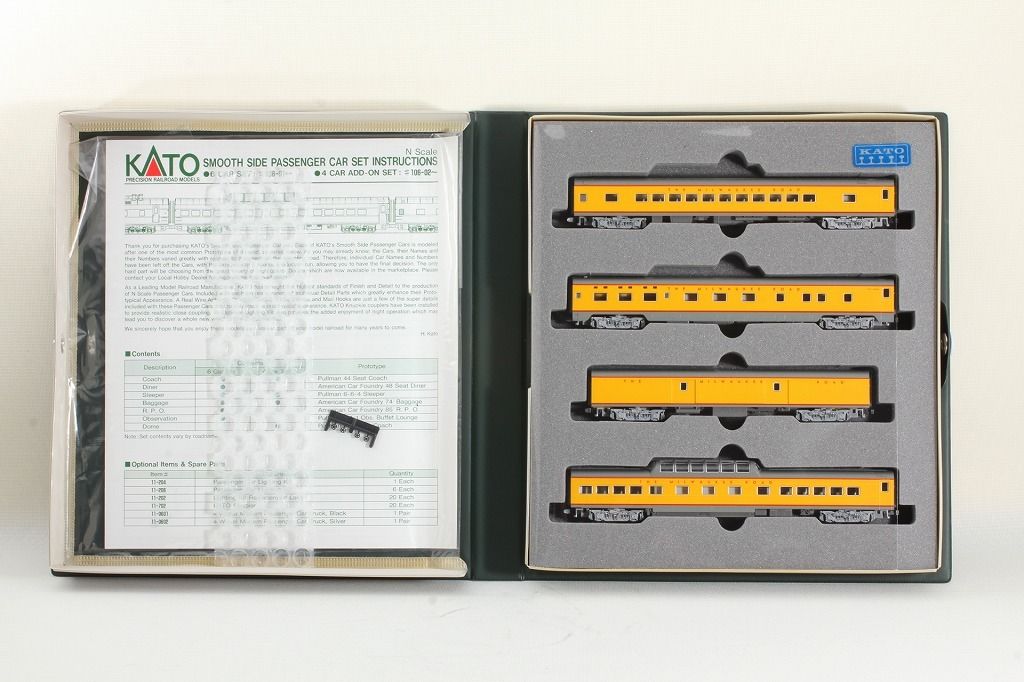 Model Information: This car is a bit of an odd-ball. It was apparently originally made in the 1970s by Kato for Con-Cor. Early examples are labeled Sekisui/Con-Cor Japan. Later examples have the label milled out and replaced with 'Con-Cor'. This would presume that the tooling was moved from Japan to the United states at some point.
Early versions came in kit form with Rapido couplers. Later versions are Ready-to-Run (RTR) and come with either dummy knuckle "Rigid Face" couplers or Micro-Trains couplers.
It is modeled after the 46-seat dome-coach built by Budd for the CB&Q (Burlington Route) in 1956 to run on the Denver Zephyr (DZ). It is very similar to the 46-seat dome-coach built by Budd for Great Northernâs 1955 Empire Builder, the latter having âslab panelâ sides instead of corrugated sides.

Despite the model having corrugated sides, Con-Cor marketed and packaged it either as a 'Corrugated Dome' (stainless steel finish) or a 'Smoothside Dome' (painted finish). The Con-Cor literature refers to it as a 'mid-train dome', which means it is not a dedicated tail car and can be used between other passenger cars.

Yet, in spite of the Con-Cor labeling and manufacturing , the Con-Cor website sometimes refers to this model as a 'Rivarossi Corrugated Dome', with a stock number starting with 0003- or 003- that is the company prefix used by Con-Cor for Rivarossi products. This is actually to complement the Rivarossi lightweight corrugated range that is missing a dome car, in particular in the Con-Cor/Rivarossi 5-car corrugated passenger sets.

So, though the 'corrugated' and 'smoothside' versions are marketed with different denominations by Con-Cor, they are technically of the same model type, hence are all regrouped in this single body style.

Warning: Con-cor designed subsequently another mid-train corrugated dome, inspired by another Budd dome built for the California Zephyr, that is not to be confused with this one.

A dome car is a type of railway passenger car that has a glass dome on the top of the car where passengers can ride and see in all directions around the train. It also can include features of a coach, lounge car, dining car, sleeping car or observation. Beginning in 1945, dome cars were primarily used in the United States and Canada, though a small number were constructed in Europe for Trans Europ Express service, and similar panorama cars are in service on Alpine tourist railways like the Bernina Express.