At least one of these are for sale right now with a price of: $6.12 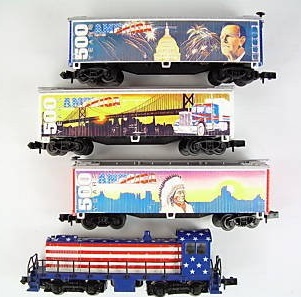 
Model Information: Arnold's S-2 was one of the first decent switcher for N scale. It was introduced in 1991. The model comes with no light.


DCC Information: This was the first N scale locomotive to come with a factory-installed decoder in addition to the analog version. A tiny dual-mode Lenz decoder is mounted inside the cab, with wires soldered to the PC board for track power and motor control.
The analog model comes with a different PC board. Conversion to DCC remains possible but is a bit complicated. For a complete description of DCC transformation, visit this article on the North Raleigh Model Railroad Club web site. You can also download the full article here .