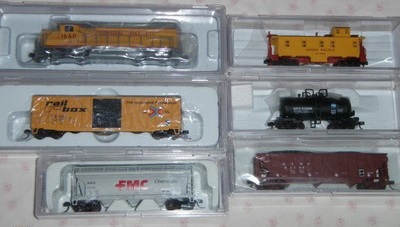 
Model Information: These train sets were comprised of only 'Trainman' locomotives and rolling stock: one EMD GP15-1 locomotive (the only locomotive in the Atlas 'Trainman' roster at the time) and a matching caboose of the same roadname, plus 4 other freight cars with various roadnames.
They were produced in 4 batches between 2008 and 2011. All the sets produced a given year were sharing the same 4 intermediate freight cars and only differing by their locomotive and caboose.

DCC Information: The GP15-1 is DCC ready. See here for more details on this locomotive model and compatible decoders.