Model Information: Boxcar, 50 Foot, Double Sliding Door, Rib Side, Without Roofwalk, FMC. This body style was acquired by Athearn from MDC Roundhouse in June of 2004. 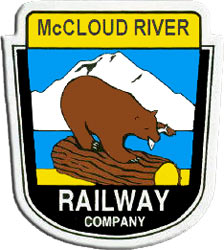 The MCR was originally built as the McCloud River Railroad chartered on January 22, 1897, as a forest railway bringing logs to the company sawmill on the Southern Pacific Railroad at a place called Upton a few miles north of Mount Shasta, California. By 1901 the company sawmill was moved to McCloud, and the distance for hauling lumber produced at McCloud was reduced to 17.8 miles (28.6 km) by shifting the junction south to Mount Shasta in 1906. The locomotives shifted from wood to oil fuel as the railroad extended into the forests east of McCloud in 1907. Trains brought logs to the McCloud sawmill from the east, and carried lumber from the sawmill west to the Southern Pacific.

The railroad remained primarily a logging railroad with several different owners over the following years including: U.S. Plywood Corporation (1963), U.S. Plywood-Champion Papers (1969), Champion International (1972), and Itel Corporation (1977). The railroad was sold to Jeff E. and Verline Forbis (4-Rails, Inc.) on July 1, 1992. On June 28, 2005, the railroad petitioned the STB to abandon most of its line. Service on all line east of the McCloud Sawmill (now abandoned) has been terminated. A small section of line between McCloud CA and Mount Shasta CA remained open briefly for excursion and dinner train service. As timber demand declined, the railroad slowly cut back although new ownership also led to its downfall. In 2009, the railroad ceased operation and closed down. The property is now for sale as a rail/trail as of 2012.