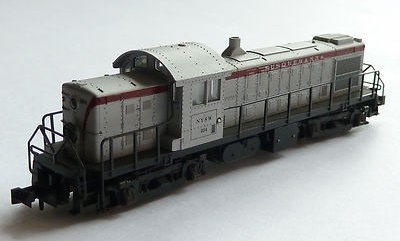 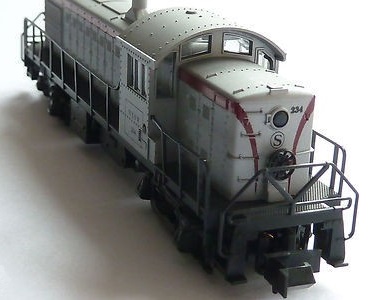 Model Information: Atlas introduced this model in 1988. From 1988 - 1997 this model was produced for Atlas by Kato Japan. In 1998, a new version was designed by Atlas and production was moved to China.

Both versions feature a split-frame design with flywheels. They run smoothly and quietly, but despite the split frame they use a two-part lightboard. In my opinion they should have upgraded to a single-piece lightboard when they did the retooling in 1998 or better yet, introduced a NEM 651 socket. The detail on the shell is typical high quality Kato/Atlas work and the printing is crisp and accurate.


DCC Information: These locomotives qualify as DCC-Friendly because even a relatively solder-clumsy idiot like myself can successfully install a TCS CN-Series decoder into one of these. It was a lot more work than a drop-in decoder, but there are lots of good internet resources explaining how to complete this. I was able to work off the well-written instructions included with the engine, but it was difficult enough, I have been hesitant to install anymore. Furthermore, the CN-Series decoders are a bit pricier than the simpler one-piece "drop-in" decoders most of us are familiar with. One note I would like to make is that the engine was much noisier with the decoder installed than it was when in DC mode. I suspect this was do to my sloppy installation technique, but I had been fairly careful and when I disassembled it to find the sources of the noise, I was baffled.

In summary, a nice engine for DC operations. If you want a DCC version, you can upgrade it yourself with some trouble or hire a pro to do it for you.

The ALCO RS-1 was a 4-axle diesel-electric locomotive built by Alco-GE between 1941 and 1953 and the American Locomotive Company from 1953 to 1960. The Montreal Locomotive Works built three RS-1s in 1954. This model has the distinction of having the longest production run of any diesel locomotive for the North American market. The RS-1 was in production for 19 years from the first unit Rock Island #748 in March 1941 to the last unit National of Mexico #5663 in March 1960.

The hood unit configuration of the RS-1 pioneered the road switcher type of diesel locomotive, beginning the move away from the carbody units which were the standard design for road diesel locomotives before then. Most North American locomotives built since have followed this basic design. In 1940, the Rock Island Railroad approached ALCO about building a locomotive for both road and switching service.

The first thirteen production locomotives were requisitioned by the US Army, the five railroads affected had to wait while replacements were manufactured. The requisitioned RS-1s were remanufactured by ALCO into six axle RSD-1s for use on the Trans Iranian Railroad to supply the Soviet Union during World War Two.