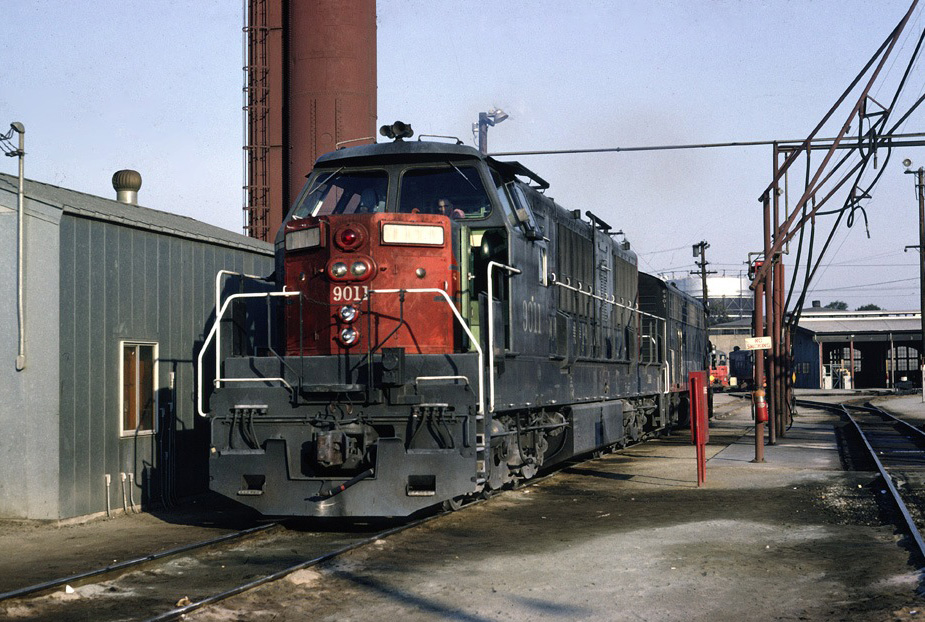 History: The Krauss-Maffei ML 4000 is a road switcher diesel-hydraulic locomotive, built between 1961 and 1969 by German manufacturer Krauss-Maffei in Munich, Germany. It generated 3,540 horsepower from two Maybach V16 engines. 37 examples were built for two North American railroads and one South American railroad.
The Southern Pacific Railroad took this into account, as business for SP was growing rapidly. Freight trains were getting longer and heavier, and SP had to use up to nearly 10 locomotives to power long-distance freight trains. SP's main workhorses at the time were EMD F7s and GP9s. Although SP had a small fleet of 2,400 horsepower H-24-66 "Train Master" locomotives manufactured by Fairbanks-Morse, SP found that they were not suitable for freight service and were relegated to the San Francisco Bay Area's Peninsula Commutes.
After much research, SP decided to experiment with diesel-hydraulic locomotives and stunned the railroading industry by purchasing three 3,540 horsepower ML-4000 type locomotives from German manufacturer Krauss-Maffei. Delivered by ship and unloaded at the Port of Houston, Texas, on October 31, 1961, they featured two Maybach V16 1,770 horsepower diesel engines and Voith transmissions. The Denver and Rio Grande Western Railroad also ordered three units, but found them unsuitable in mountain service, and they were sold to the SP in early 1964. Upon arrival, a special track was set up at the locomotive shops in Roseville, California, just for servicing the ML-4000s.
The first order of the ML-4000s are referred to as âcab units,â given that they have a fully enclosed car body, similar to that of the EMD F-unit. Following extensive testing SP returned to Krauss-Maffei for an additional fifteen units. Delivered in 1964, they featured the same engines and transmissions but looked very different on the outside. These are referred to as âhood unitsâ because of their hood type bodies.
SP found the ML-4000s unsatisfactory in service over the Sierra Nevada mountain range, so they were relegated to service in flat territory throughout California, often paired with F7s or GP9s. The locomotives were fairly reliable, with only one recorded failure. Upon ordering the second batch of ML-4000s, SP also purchased three DH643 diesel-hydraulic locomotives from Alco.From Wikipedia