Please help support TroveStar. Why?
At least one of these are for sale right now with a price of: $19.00

Collectors value this item at an average of 17.99 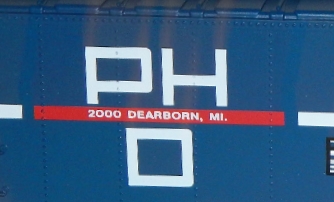 The PH&D was established in 1917 to purchase and extend the Port Huron & Southern Railroad. While there were grand plans to build to Detroit, the PH&D only got from Port Huron to Marine City, Michigan, 14 miles away. Nevertheless, the PH&D kept busy hauling auto parts, coal, salt, steel, chemicals, rubber and sugar beets. In the steam era, PH&D hosted a fleet of 0-6-0 switchers. These were gradually replaced with a trio of Alco diesel switchers. The Duffy Family who had owned the railroad since 1922, sold it to Chesapeake & Ohio in 1984. C&O successor CSX officially merged it into their system in 1989. CSX continues to operate the route.