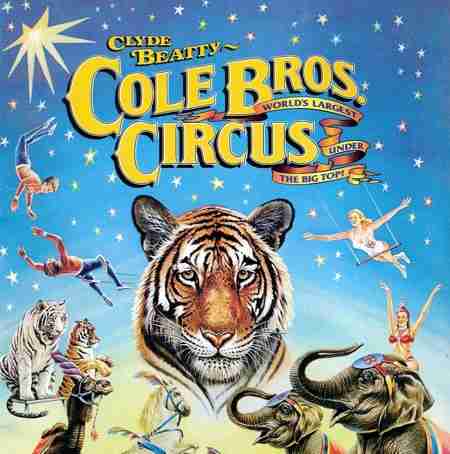 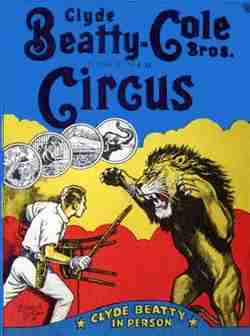 
Company History: in 1957 the Clyde Beatty railroad circus was purchased by Frank McClosky, Walter Kernan, Jerry Collins and Randolph Calhoun. The show was moved from rails to trucks and began wintering in DeLand. FL., at the old Johnny J. Jones Shows, (a large carnival) winter quarters.
The partners in the new circus formed the "Acme Circus Operating Corporation", obtained the Cole Bros. title and took the show on the road as the Clyde Beatty Cole Bros. Circus in 1957. With it's excellent organization, experienced and dedicated staff and solid financial backing, the new show became a major player in the circus industry for the next 20-plus years.
Randolph Calhoun, passed away in 1961, Walter Kernan in 1963 and Frank McClosky 1n 1979. After Frank McCloskey died the remaining owner Jerry Collins donated the show in it's entirety to the Florida State University in 1981 stating his desire to "..benefit people of all ages. I want to preserve the tented circus for children and also to help the students at Florida State.".
Johnny Pugh, who been a manager on the show since the mid-1960 purchased the show from FSU and has been operating it ever since, dropping "Clyde Beatty"from the title and operating it as the Cole Bros Circus.

The Cole Bros. Circus was a medium-sized American circus. It was founded in 1884 as "W.W. Coleâs New Colossal Shows", by William Washington Cole. In the 1930s, the circus employed two noted animal trainers, Clyde Beatty and Allen King, both of whom traveled in their own railroad cars. Another well-known performer with the circus was Bob Strehlau Juggles the Clown.