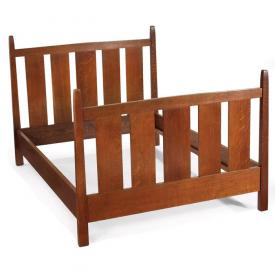 Example is the 54" version.

Arts and Crafts bed frames are known for broad horizontal and vertical slats. It is common to find frames from this time period entirely comprised of oak. The intersections in the frame are held in place by fitting tenons in mortises and securing the joints with a pin.