Please help support TroveStar. Why?
2 of these sold for an average price of: 10.50 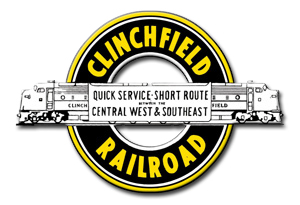 The Clinchfield Railroad (reporting mark CRR) was an operating and holding company for the Carolina, Clinchfield and Ohio Railway (reporting mark CCO). The line ran from the coalfields of Virginia and Elkhorn City, Kentucky, to the textile mills of South Carolina. The 35-mile segment from Dante, Virginia, to Elkhorn City, opening up the coal lands north of Sandy Ridge Mountains and forming a connection with the Chesapeake and Ohio Railway at Elkhorn City, was completed in 1915.