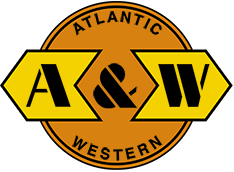 Originally the A&W ran between Sanford and Lillington, 25 miles. In 1961, the line was abandoned except for 3 miles from Sanford eastward. In the 1970s, the ATW's fleet of modernized 40-foot boxcars in food lading service were some of the very last 40' boxcars in revenue service in the United States. In 2001 the A&W began operating between Sanford and Cumnock over a line that was originally a segment of the Cape Fear and Yadkin Valley Railway and subsequently Southern Railway and Norfolk Southern. In 2011, Norfolk Southern granted the A&W additional rights to serve customers between Cumnock and Brickhaven over the original Norfolk Southern Railway.