Please help support TroveStar. Why?
At least one of these are for sale right now with a price of: $50.00

ACFÂ® Industries built a general-purpose, single-compartment, 23,500 gallon, insulated, coiled, non-pressurized tank car from 1969 on. The cars are still in service today. A wide variety of products can be transported in this size and type of tank car. This includes asphalt, ethanol, fuel oil, metal sodium, molten phenol, paraffin wax, tallow, urethane polyol, and vegetable oil. They are mostly owned by the companies that produce the products carried, rather than the railroads themselves. 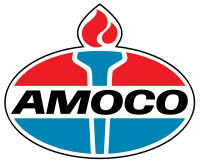 Amoco Corporation, originally Standard Oil Company (Indiana), was a global chemical and oil company that was founded in 1889 around a refinery located in Whiting, Indiana, United States.

It later absorbed the American Oil Company, founded in Baltimore in 1910 and incorporated in 1922 by Louis Blaustein and his son Jacob. Amoco merged with British Petroleum in December 1998, forming BP Amoco. Shortly after the merger, Amoco stations began a rebranding that saw the stations change their names to the BP marque while continuing to sell Amoco-branded fuel. Eventually all traces of the Amoco brand name were eliminated and the stations adopted the BP branding permanently, although Amoco's grade naming system is still in use.

The firm's innovations included two essential parts of the modern industry, the gasoline tanker truck and the drive-through filling station.[1] Its headquarters were located in the Amoco Building (now the Aon Center) in Chicago, Illinois.