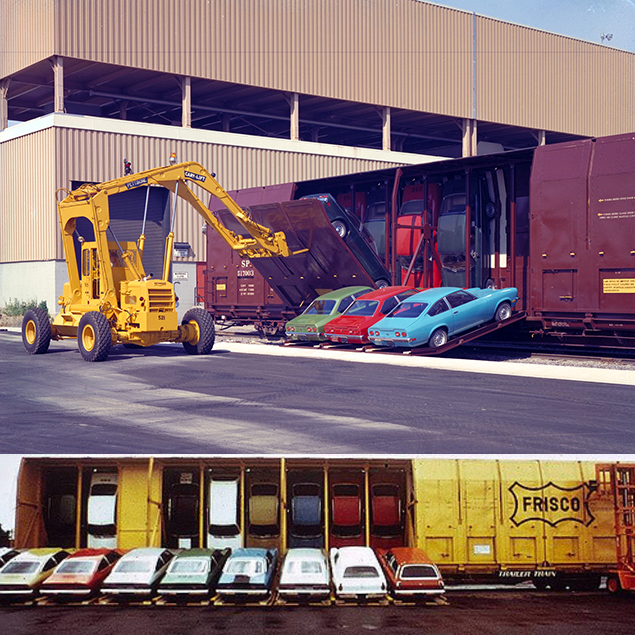 Aimed at reducing shipping costs, a uniquely American innovation that entered service in April 1970, the 89' 4" long Vert-A-Pac automobile carrier transported thirty sub-compact cars in the same cubic space as a conventional tri-level autorack, which could only transport eighteen vehicles.

Cooperatively developed by ACF and the Southern Pacific to transport General Motors upcoming Chevrolet Vega models from their points of manufacture to US distributors, the Vert-A-Pac was designed to transport thirty of the new sub-compact automobiles in a vertical, rather than a horizontal position.

Parked on one of three spots that were located on ten bottom hinged doors that doubled as ramps and numbered five per body side, each Vega was secured; then, in groups of three, were stood on end (nose down) within the Vert-A-Pac body after each door was lifted into a closed position with a forklift truck.

Transporting automobiles nose down is no small engineering feat, as the issues of fluids (e.g., battery, gasoline, oil, and windshield wiper) retention and potential transport damage to engines and transmissions had to be considered.

Phased out after Vega production was ended in 1977, most of the flatcars were reracked with conventional tri-level racks and the Vert-A-Pac bodies were scrapped.
Click Here for all Articles on Vehicles
The copyright for this article is held by the author.
rights were granted to: TroveStar LLC