Before the attack on Pearl Harbor on December 7, 1941, and the United States officially entering World War II the following day â the effects of the war had already touched the lives of Americans. The pain and destruction experienced by loved ones in Europe was a daily occurrence. And although not as horrific as the human suffering felt overseas, the average American citizen was asked to sacrifice conveniences (that we take for granted today) all in the name of justice for our Allies.

The United States tried to remain politically neutral during the onset of the War, but finally decided to assist Her European Allies with the Lend-Lease Act of March 1941. The act directed the lend or lease of war supplies to any nation deemed "vital to the defense of the United States." Under this Act, the Office of Production Management limited the consumption of aluminum and restricted the use of steel for only government approved projects by August of that same year.

Once America was drawn into war in December 1941, the United States immediately converted its economy and industry towards supply manufacturing. Factories, plants, and mills were transformed for military supply production. The War Production Board (WPB) ordered a reduction in the use of tin packaging, banned the use of both steel and iron in over four hundred products (including household appliances) and discontinued the manufacturing of silverware. The US Mint removed nickel from its nickel coin and copper from pennies during this timeframe. Communities across the land organized scrap metal drives to donate materials to produce that helmet â that gun â that tank...to help bring an end to war.

Railroads also participated immensely in the war effort. The locomotive power to move troops and supplies â the passenger cars to transport soldiers and other war participates â the rolling stock to haul both raw and finished products utilized in battle. In 1944, 97% of all military passengers and over 745,000 ton-miles of war supply freight traveled by rail.

The War Production Board requested that railcar builders substitute wood for steel wherever possible without compromising safety. In 1942, the WPB approved the designs of seven composite (constructed of various parts or elements) freight cars. The war emergency 50-ton, 2-bay hopper with external truss bracing and horizontal wood sheathing planks was one of these designs. Unfortunately, the wooden boards were substantially thicker than metal sheets â thus lowering the carrying capacity for these railcars. Other war emergency railcars included a 52-foot composite mill gondola and 40-foot plywood sheathed boxcar.

Over 11,000 of these hoppers were manufactured between 1942 and 1945 â the most common war emergency car built during this era (the Missouri Pacific and Norfolk & Western were the only two railroads to use a 70-ton variant). The original intent was to have the wooden sides and end slope sheets replaced eventually with steel after the War â but many wooden wartime hoppers survived into the 1960s and 1970s without the upgrade. Each war emergency composite freight car conserved over two tons of steel â a tremendous savings when you discover that a tank required 18-tons of metal and a Navy battleship over 900-tons.

The Bluford Shops in Bluford, IL has released a series of â2-Bay Rebuilt War Emergency Hoppersâ - the first time this model has ever been available in N-scale. These hoppers represent the era when the wooden planks were replaced with all steel parts during the 1950s and 1960s.

The initial release is comprised of the following road names: Individual cars were released with a suggested retail price of $24.95. Multi-packs were issued for various schemes with a retail price of $49.90 for a 2-Pack and $74.85 for a 3-Pack. A special Southern Railway paint scheme with a permanently coupled pair of two hoppers was made available for $55.90. Each featured hopper car for all railroads has a unique road number.

The ready-to-run open hopper comes packaged in a clear plastic jewel case with a slip-off cover and a one-piece plastic tray. A thin plastic film was wrapped around the car to protect the railcar from blemishes. The model information is clearly labeled on the end of the case for ease to locate when in storage â the paper sleeve with the data printed is a little flimsy, but it does the job. No additional detail parts were found in the packaging. 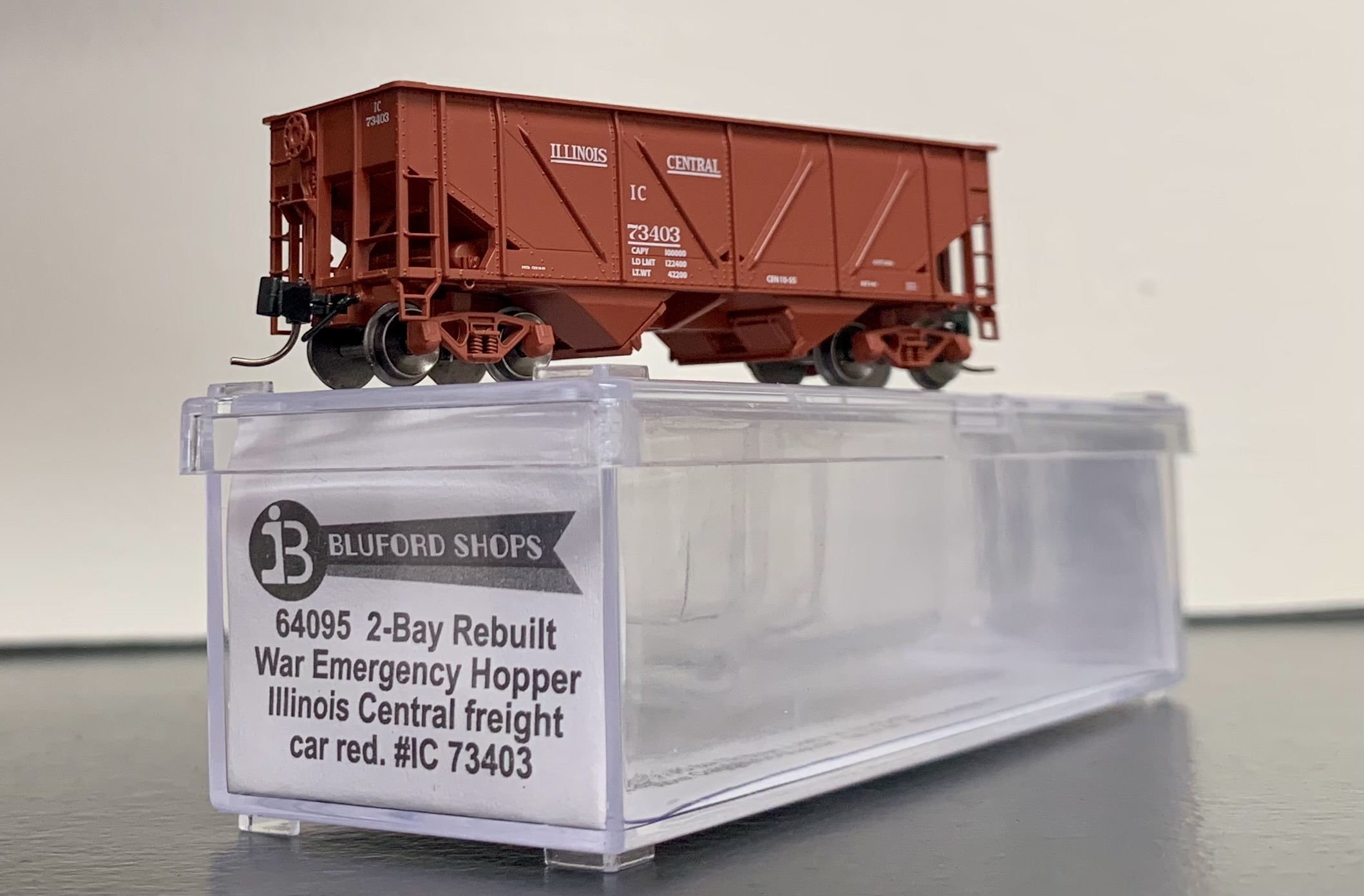 The red paint job is crisp and even along the entire model. The sides and ends of the model are injection molded plastic while the interior center bay sill is diecast metal. The white lettering is extremely sharp and clear, even when magnification is needed for the smaller printing. The placement, font, and size of printing is similar to prototype images for Illinois Central hoppers from that era.

Both ends feature a full height ladder and support rails for the outer sloped discharge bays. A high mounted Miner model 6600 handbrake, with release lever & chain detail, and platform are found on the B-end along with air tank, valve, and brake line assembly visible on the end deck. Tiny plastic body-mounted brake hose detail parts are affixed on each car end â care is needed not to break these fragile pieces. The lettering is neat and in proper arrangement with the road marker and road number at the top right corner of each end. 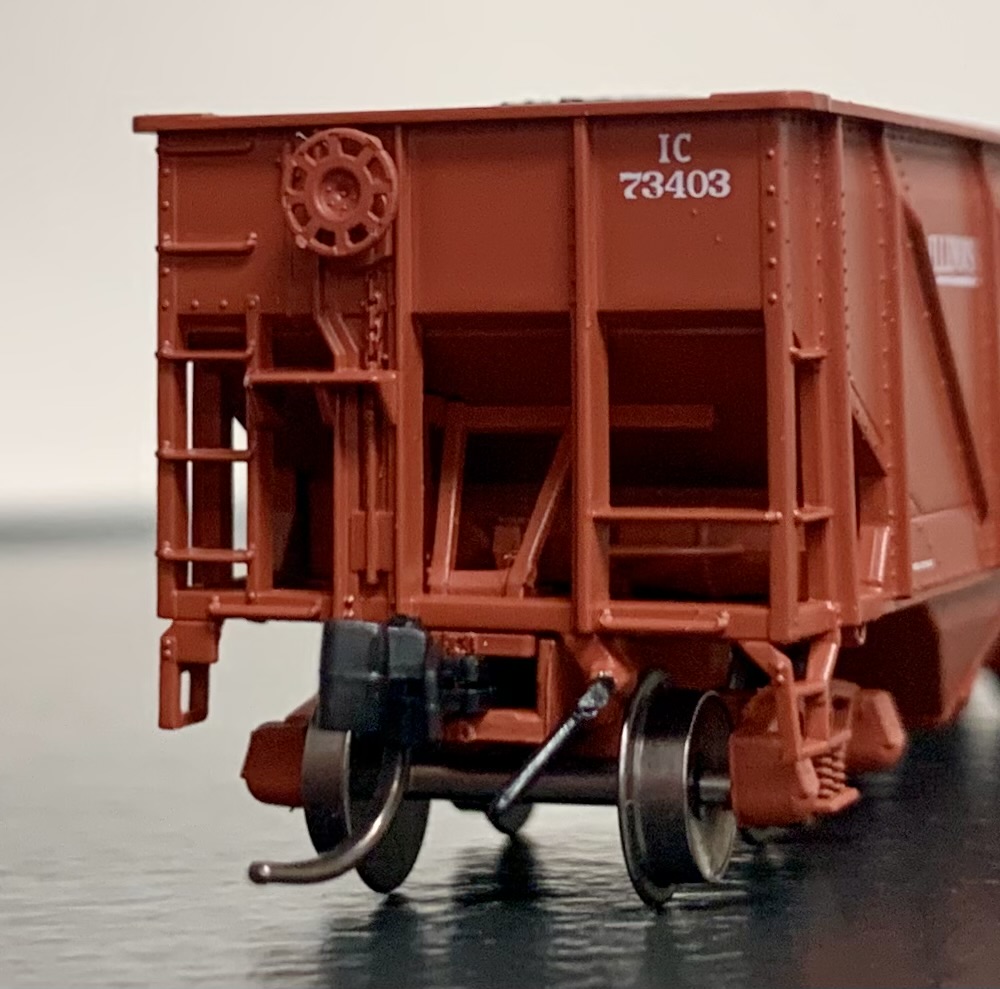 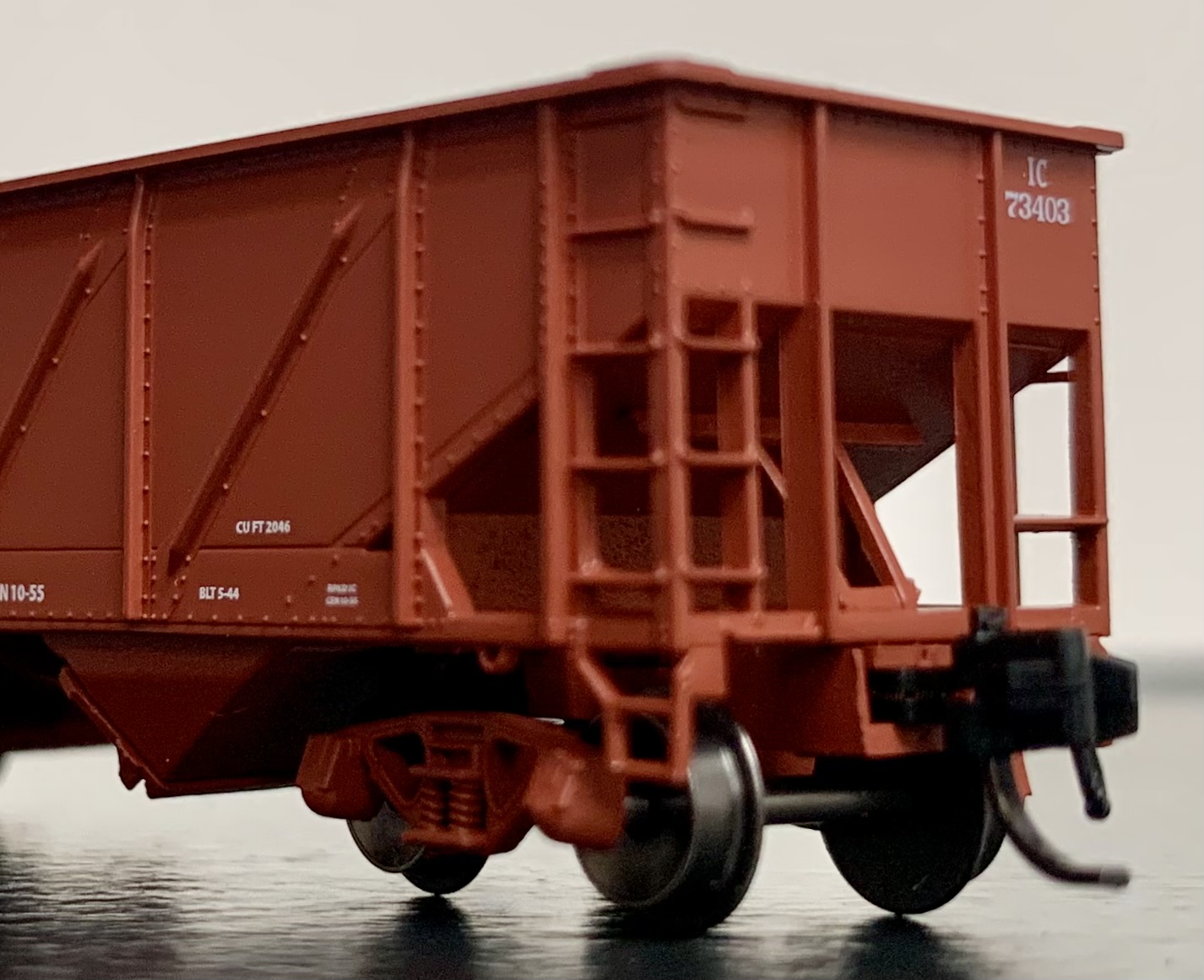 The inside of the two-bay hopper displays sloped sides directing the cargo towards the four outlet gates â each bay has two gates on either side of the hopper car. The interior also features rivet patterns and a diecast center sill construction. The authentic-looking coal hopper load is removable and extra weight can be hidden under this extremely thin, black plastic detail piece. 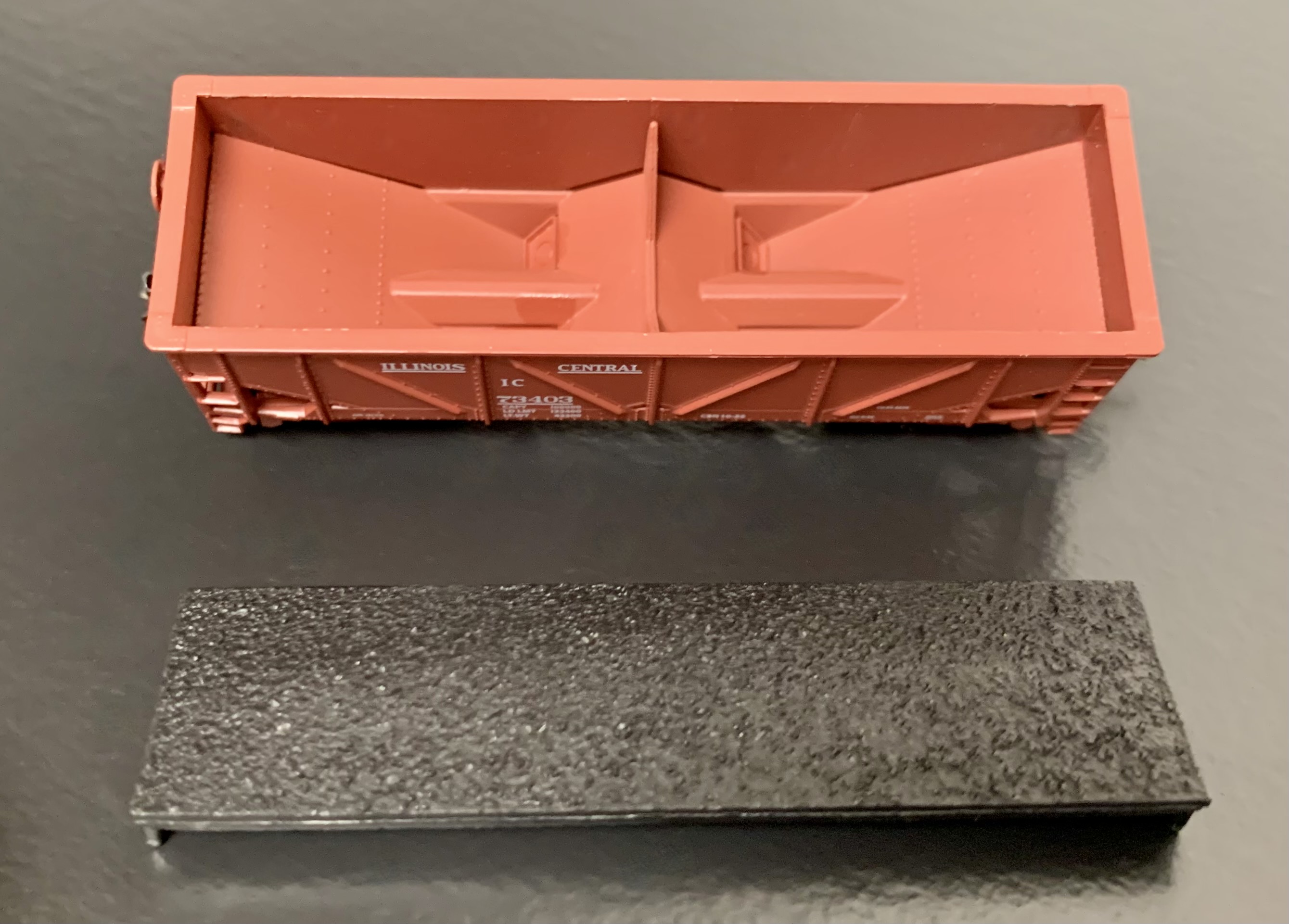 The underside of the hopper car is simple with four mounted outlet gates. These discharge gates are detailed with rivet lines and outlet hatch hinges. The model rides along smoothly on blackened Fox Valley Models metal wheels. Both body-mounted magnetically operating knuckle couplers were aligned to proper height.

The Bluford Shops model is 2 1/2 inches long and weighs 0.60 ounces, which is exceptionally light according to the National Model Railroad Association (NMRA) recommendations (0.90 ounces) - there is ample room to add weight inside the open bay compartments if desired. It was a fine runner, even at its light weight, while testing the car on Kato Unitrack with no issues around curves or through turnouts at slow and medium speeds.

In closing, another solid post-War release by Bluford Shops â and a model not offered before to the N scale crowd. Crisp lettering, defined rivets, extra fine brake hose detail parts, metal wheels and a realistic coal load. As usual with open hopper cars â the weight is a tad lighter than recommended...but can easily be rectified with extra weights or a heavier homemade load. âV is for Victoryâ if you add a few of these rebuilt war icons onto your layout.

CNW400 became enamored with trains while watching the âGreen & Yellowâ double-decker cars clad with shiny green windows (C&NW) rumble by his childhood house in Chicago. His first train set was the Tyco Bicentennial model in 1976. Always a fan of the railroad, CNW400 is newer to the hobby, active for the last four years (now that all the kids are grown-up!). Furthermore, he is also a collector of railroadiana focusing on lanterns, locks & keys and insulators.
Click Here for all Articles on N Scale Model Trains
The copyright for this article is held by the author.
rights were granted to: TroveStar LLC