Blog Vehicles Vehicle Reviews What is a Bathtub Gondola?

What is a Bathtub Gondola?

Coal consumption may be on the decline in the U.S. but we still heavily rely on this bulk commodity (used to generate electricity and as a basic industry source to make steel, cement, paper and other products) and the rail cars that transport it.

Traditional, low-sided gondolas (a.k.a "gons") have existed since the 1st half of the 19th century and the beginning of the American railway system. They were the first coal-hauling freight cars but quite inefficient since contents had to be shoveled out by hand. For over one hundred years, open top hoppers (which came into service in the late 1800s) were used to handle the bulk of coal transportation in this country from pre-WWI through the 1970s. Today mostly aluminum, high-sided "bathtub" gondolas (created in the early 1990s by car builder Johnstown America) are used to transport this bulk commodity. Railways continue to use hopper cars to haul coal but coal gondolas are more popular.

These cars, called "Coalporters" by Johnstown-America, became known as bathtub gondolas because of the two tubs mounted at the bottom of the car alongside the sill. These tubs added to the car's capacity (100 tons or greater) and also lowered its center of gravity. These freight cars (which did not require high-maintenance mechanical doors and hardware) were less expensive to make and operate than same-size hoppers. A bathtub gondola permitted the railroads to haul larger quantities of coal per car. 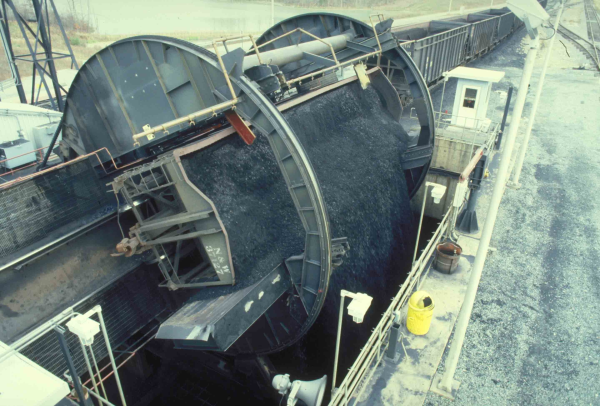 Since these cars do not have hatches for discharging the coal shipped in them, railroads must flip the cars upside down using rotary dumpers. These 'rotary dumpers' (pictured above) are mechanisms that hold a car against a short section of track as the car and track are slowly rotated upside down to empty the car. To quicken the unloading process, rotary couplers (on one end of the car) are used.

Today, it is commonplace to see bathtub gondolas (with 100 ton and 110+ ton capacity) moving coal, which is considered the number one commodity hauled by rail, across the country.

Here is a list of BethGon Coal Porters from Kato. Made in steel and aluminum, these BethGons are the most popular modern coal hauler with ends that look like hopper cars and tubs below floor level.