Title: How to enter a Con-Cor product stock number? 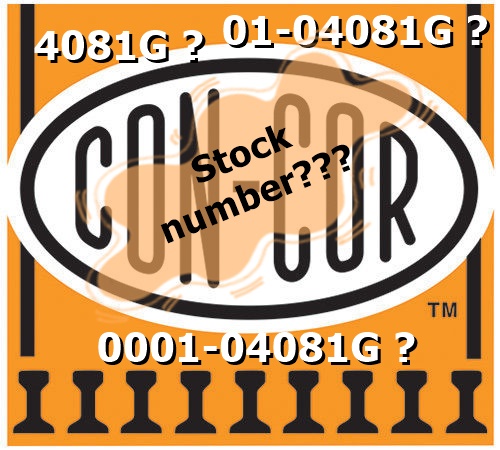 As several of you may have noted, the Con-Cor product stock numbering has many variants, resulting in several different forms being used in the TroveStar N-scale database, hence making it difficult for users to properly identify Con-Cor items, and resulting in items being displayed in erratic order on listing pages.
In this article, we explain the Con-Cor numbering rules and the way we are going to apply them in the TroveStar database.

Like all other model train manufacturers, Con-Cor has made its product stock numbering evolve over years, in order to accommodate an increasing amount of references.

It first started, like Atlas, Life-Like and many others, with a four-digit number. Then for certain series of items, it moved to 4-digits + one letter, printed either 1234A or 1234-A.

Con-Cor was also a distributor of other brands. In their 1978 catalog, they added a manufacturer prefix number before each manufacturer's stock number. Like Walthers, the manufacturer prefix was a three-digit number, but with specific Con-Cor codes, different from the Walthers's ones. Naturally, Con-Cor assigned code "001" to its own production, and then the following numbers to the brands they were strongly associated with, such as "002" for Heljan, "003" for Rivarossi, "004" for Peco and then for Herpa, "005" for Shinohara... With the introduction of the manufacturer's prefix, the stock number was then coded over 6 digits, so as to make room for further expansion. So a Con-Cor item referenced until then 1234 for instance, was renumbered in the catalog into 001-001234, whereas an item referenced 1234A was renumbered into 001-01234A. This new number was not necessarily reflected immediately on the item's package, that could remain 1224-A for a while, to continue using the same example. Then Con-Cor started to use the 6-digit code in full, with numbers like "001-123401", "001-123402", etc.
The manufacturer prefix code was obviously not printed on the items package of other brands, as this was an internal Con-Cor numbering system. For instance, the Heljan roundhouse B-643 was referred to as 004-000643. At some point in time, in the 1980s, the prefix code was extended to 4 digits, with Con-Cor code being now "0001".

So far so good, seems to be a pretty consistent numbering system. Yes but ...

... its application was not.

So what is the consequence for the TroveStar N scale model train database?

Well, a big mess in referencing Con-Cor items and some difficulties for our users when searching a Con-Cor item, because the number and position of the leading non-significant zeros will make a difference, possibly resulting in a no match. For instance if you search for 0001-001234 but the item was entered as 001-1234, the search will not return the expected item. Note however that our search engine ignores the non alphanumeric characters like spaces, dashes and brackets, as well as non significant leading zeros, when searching the primary stock number, in order to increase the chance to match a ill-formed stock number.
If the impact on searching is somewhat limited, the sorting of items on listing pages is directly affected, as it uses all characters of the stock number.

Setting the rule for TroveStar

Hence, we will normalize all Con-Cor stock numbers so as to use only the following patterns:

What is important, for sorting and display purposes, it not to mix rules a) and b) above for a given series of similar items (typically, of the same body style). Select the one that is the most appropriate and stick to it. For instance, if an item of a given body style has been run several times over years, using different variants of numbering, then use rule b) - and possibly c) - for all items, including the old ones. Use "Secondary Stock Number" (or "Tertiary") field to input the original older number.

If you have a different form on the package label, then normalize it as defined above for use as the primary stock number in TroveStar and use the "Secondary Stock Number" (or "Tertiary") field to input the number in the very same form that you noted on the package. Again, this will increase chances to find the item.

Con-Cor also renumbered some of their products when they were offered either with dummy Con-Cor knuckle couplers (or Rapido couplers) or with Micro-Trains Line couplers. The former retained the stock number used for years, whereas the latter was assigned a brand new stock number, both numbering being unrelated one to the other.
In such case, if only one entry is created in the database for both versions, the rule shall be to use the older number (Rapido/dummy Con-Cor coupler) as the (primary) stock number and to enter the newer number (MTL coupler) as the "Secondary Stock Number" (or "Tertiary"). A note in the "Specific Item Information" field to explain which number corresponds to which coupler is appreciated. It remains obviously possible to create two distinct entries in the database for both versions; in such case however, please use the "Secondary Stock Number" (or "Tertiary") field to 'cross-reference' the other version.

We would appreciate that all new Con-Cor items are entered in line with the above rules. We have fixed the database for already existing Con-Cor items that did not follow these rules, as far as we could; there could be errors or omissions left however.

Alain is an avid n-scale modeler who collects North American rolling stock with a focus on Canadian railroads and BNSF and all its predecessors. He occasionally purchases other models from European railroads. He has been using DCC since it's been available and successfully mixes North American and European DCC equipment. Alain regularly contributes to the TroveStar N Scale Model Trains Database (code, data and blogs), as well as to JMRI. By day, Alain works for a world-class railway signaling firm as an automation and real-time industrial computing engineer. This Frenchman lives near Paris.