Please help support TroveStar. Why?
3 of these sold for an average price of: 7.73 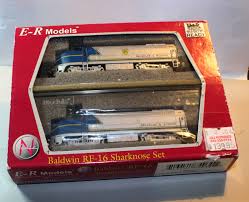 Model Information: AHM contracted Roco to use the create the "jumbo hopper" in the late 1960s. The model scales to a prototypical length of about 60 feet. It was marketed in early AHM catalogs as simply a "Covered Hopper", which distinguished it from the "Center Flow Hopper" which is also made by Roco but has a distinctly different appearance. After AHM stopped ordering these from Roco, Con-Cor started releasing the same mold.

Right into the 1960s, grain typically was carried by 40' boxcars. They were difficult to load and to unload, but they had the huge advantage that they could be repurposed for other kinds of freight during the times when not needed for the grain rush. However, the 1960s were a tough time for the railroads. Due to competition from interstate trucking, the railroads were forced to innovate to stay competitive. This resulted in the development of the large volume covered grain hopper. The cars could handle any bulky low-density commodity that needed protection from the elements. Grain was the natural load for these cars, and Southern was a leading innovator with this type of car. They developed the 'Big John' which was quickly emulated by many other railroads.