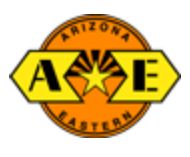 This 265 mile line in southwestern Arizona and western New Mexico is shaped like a backward J. It runs from Miami, Arizona southeast to Bowie on the UP Sunset Route, then east on trackage rights on the Sunset Route to Lordsburg, New Mexico. The AZER then turns northwest to Clifton, Arizona. They primarily serve the copper industry but agricultural products and lumber loads are also common. Some important AZER dates: