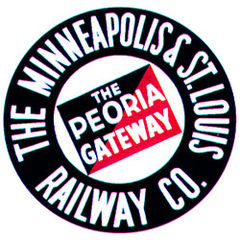 The M&St.L dates to 1853 and received the M&St.L name in 1870. They ran west from Peoria, Illinois to Oskaloosa, Iowa. There the mainline split. The more heavily trafficked line headed north through Marshalltown, Albert Lea and ended in Minneapolis. The other route from Oskaloosa headed northwest to Des Moines, then traced a big arc thought Spencer, Iowa; Winthrop, Minnesota and back to Minneapolis. A northeast to southwest diagonal line connected these to parallel routes. In addition to some shorter branches, there was a very long branch from Winthrop, Minnesota to Aberdeen, Leola, and Akaska, South Dakota. Although they had St. Louis in the name, and they were known as âThe Louieâ by locals, they never went anywhere near that city. Total mileage during the 50âs ran about 1,400. Thatâs just a bit smaller than Western Pacific.

The M&St.L called itself âThe Peoria Gateway.â Peoria, Illinois, like Chicago and St. Louis is a gateway between eastern railroads and western railroads. M&St.L was in a position to forward freight from Great Northern and Northern Pacific in Minneapolis to Peoria and its connections with Pennsylvania, Nickel Plate, Toledo Peoria & Western, and their favored connection, New York Centralâs Peoria & Eastern subsidiary. Because Peoria was far less congested than Chicago, it often saved a day of transit time between Northwest and Eastern end points.

M&St.L also jointly marketed a route with Illinois Central for traffic between Chicago and Minneapolis under The Albert Lea Route name. It was surprisingly successful given that Burlington, Milwaukee Road, Chicago & North Western, and Soo Line all served the same corridor.

Passenger service was not their forte. Rock Island served the same major cities with nicer trains. That left M&St.L with a fleet of doodlebugs, often running with one to three trailers to serve local communities. An average passenger on the M&St.L traveled just 90 miles. In later years, Budd streamlined coaches served as trailers.

M&St.L operated in receivership from 1923 until 1942, longer than any other railroad at the time. Lucian Sprague, the receiver and later president dumped the oldest freight cars and bought new ones. By 1950, the steam fleet (the largest engines of which were light Mikes and light Pacifics) had been completely replaced with diesels.

M&St.L had more Alco RS-1âs than any other line (35) and painted them in NINE different paint schemes. SD7âs were painted in one of those schemes: black, cream, and gray. F units were painted in two versions of yellow and green with orange pinstripes. Switchers were black with modest striping. A new president in 1956 brought a new red and white paint scheme that was a nod to his alma mater, the University of Nebraska. Incidentally, that is the TENTH paint scheme for the RS-1âs. A bit later, they began painting freight cars in the same red with big jaunty M&St.L lettering that Lionel made nationally famous.

During this period, M&St.L tried to gain control of Toledo Peoria & Western and the Monon. Pennsylvania and Santa Fe joined forces to block the TP&W acquisition and that was that. The Chairman (Ben Heinman) left M&St.L to head the Chicago & North Western. In 1960, C&NW bought the railroad assets of the Minneapolis & St. Louis and merged the operations. The M&St.L corporation became an empty shell, which changed its name to MSL Industries and got into the hardware and finished steel businesses. MSTL reporting marks are still used today by Union Pacific to denote certain leased car fleets.