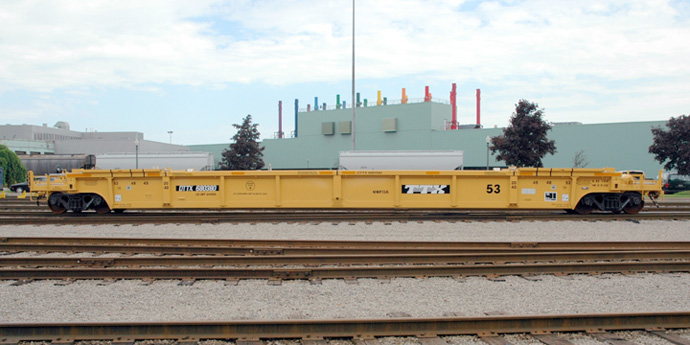 History: Double-stack container trains first hit the rails for regular service in 1981. The Southern Pacific Railroad had developed the idea to provide service for the Sea- Land maritime shipping company. SP's pioneering double-stack service let Sea- Land's containers take a shortcut from the west coast to the Gulf of Mexico bypassing the Panama Canal. From prototype car to production order, the SP spent a little over four years on the double-stack development project. The SP's double-stack cars featured unwieldy bulkheads on each end to prevent the loose top container from blowing off of the car. A new group at Greenbrier Intermodal designed a similar bulkhead car, even as other companies were starting to leave the bulkheads off of their stack cars. The support for the upper container came from inter-box connectors (IBCs) which had been used for years in oceangoing container shipping. Greenbrier and their car builder, Gunderson, wanted to get in on that market, and did so with their Maxi-Stack cars. But there was another new market out there: developing a single, two-truck stack car. Almost all of the existing cars in service were articulated, with the exception of one SP prototype car.

Gunderson traces its roots to 1919 when Chet Gunderson opened Wire Wheel Sales and Service Company of Portland, Oregon. His brother, Al Gunderson joined in 1923 and shortly thereafter Gunderson Brothers was born. They became a leading steel fabricator and manufactured thousands of vital ship components during World War II. They also built lifeboats and life rafts: 3,600 by 1945.

Peace-time barges began in 1949 and the first order of railcar underframes came in 1958. In 1985, The Greenbrier Companies acquired the former Gunderson Brothers operations from FMC Corporation and restored the Gunderson name to the Portland waterfront. Since that time, Gunderson has established itself as a leader in engineering and manufacturing railcars and marine barges.

As of 2018, Greenbrier's Gunderson division is one of the largest producers of intermodal railcars.