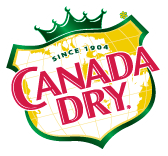 Canada Dry is a brand of soft drinks owned since 2008 by the American Keurig Dr Pepper. For over a century, Canada Dry has been known for its ginger ale, though the company also manufactures a number of other soft drinks and mixers. Although Canada Dry originated in Canada, it is now produced in many countries around the globe, including the United States, Mexico, Colombia, Peru, Japan, & a number of countries of the Middle East & Europe.

The "Dry" in the brand's name refers to not being sweet, as in a dry wine. When John J. McLaughlin, who first formulated "Canada Dry Pale Ginger Ale", originally made his new soft drink, it was far less sweet than other ginger ales then available; as a result, he labelled it "dry".