10.30Collectors value this item at an average of 10.30
Click to see the details
collector
This item is not for sale. This is a reference database. 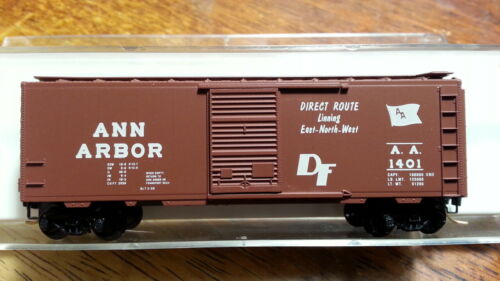 Ann Arbor was formed in 1895 to reorganize the bankrupt Toledo Ann Arbor & North Michigan. It ran from Toledo, Ohio through Ann Arbor, Michigan northwest to the coast of Lake Michigan at Frankfort. There, railroad car ferries forwarded the traffic to four ports across the lake. The rail portion was almost exactly 300 miles. Detroit Toledo & Ironton had control of the company between 1905 and 1910. In 1925, the Wabash took control of the Ann Arbor. As diesels began to arrive (mostly Alco FA's and RS1s) they came in Wabash blue, gray and white but with Ann Arbor lettering and a "marine" version of the flag on the nose. This is where it gets a bit complicated. Wabash was controlled by the Pennsylvania Railroad who, in the early 60s, was planning their merger with the New York Central. They knew they would not be permitted to control Wabash through the merger and began arranging marriages to limit any negative impacts. They arranged for Wabash (whom they controlled) to be leased by Norfolk & Western (whom they didn't control but had considerable influence over) as part of N&Wâs consolidation with Nickel Plate, Akron Canton & Youngstown, and Pittsburgh & West Virginia. For some reason, Ann Arbor was to stay in the PRR sphere and not go with the Wabash. So prior to that merger, Wabash sold the Ann Arbor to the Detroit Toledo & Ironton (whom PRR also controlled.) That was in 1963. At that point, AA traded in their blue, gray and white for DT&I orange with Ann Arbor lettering. As the 60s pressed on, demand for cross-lake ferry rail service dwindled until only the two Wisconsin routes remained. By 1972, AA was down to 15 locomotives. A year later, they declared bankruptcy. The line operated in receivership until April 1, 1976 which was Conrail's first day of operation. After a short time, Conrail announced that it wasn't interested in operating any AA route north of Ann Arbor, but the state of Michigan wanted to keep the road together. So Michigan Interstate took over as the designated operator of the Ann Arbor Railroad. âMichigan Interstate Railway Company Operatorâ lettering was applied to the short hoods of many AA locomotives. In 1982, all ferry operations ended and the following year AA was split between the Michigan Interstate, the Michigan Northern and the Tuscola & Saginaw Bay (later the Great Lakes Central.) Then in 1988, a new company bought the section from Toledo to Ann Arbor. That is the current "Ann Arbor Railroad." Ann Arbor joined the Watco shortline group in 2013.