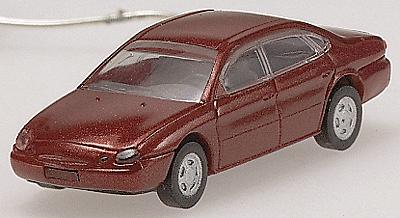 The Ford Taurus is an automobile manufactured by Ford in the United States. Now in its seventh generation, it was originally introduced in the 1986 model year, and has remained in near-continuous production for more than three decades. It has had a Mercury-branded twin, the Sable (1986â2005; 2008â2009), as well as a performance variant, the Ford Taurus SHO (1989â1999 and 2010â); in addition, it served as the basis for the first-ever front-wheel drive Lincoln Continental (1988â2002). It was a front-wheel drive mid-size car until 2007, and has been a "global" full-size car (built on the Ford D3 platform) since 2008, and available in front- or all-wheel drive since 2008.