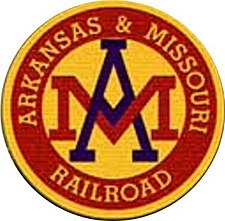 The Arkansas & Missouri was established in 1986 by the same people who brought us the Maryland & Delaware Railroad. Burlington Northern had lost interest in and sold the former Frisco route from Monett, Missouri south to Fort Smith, Arkansas by way of Springdale, Fayetteville and Van Buren. The route also includes a branch to Bentonville. In total they run 139 miles of railroad. Most of the customers are located on the middle third of the railroad between Fayetteville and Bentonville. Traffic includes aluminum, animal feed, food products, grain, lumber, paper, plastics, sand, scrap, steel and minerals.

The A&M was an all-Alco powered road (Alco was also the preferred locomotive brand on sister road Maryland & Delaware.) That ended in 2013 when A&M acquired a trio of SD70Ace units that now lead the heaviest trains. A&M also runs tourist trains through the scenic Boston Mountains between April and November each year.