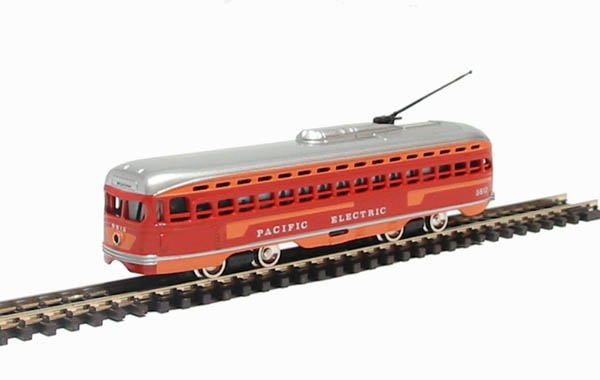 Model Information: This Bachmann streetcar has been around for some decades. Features include: eight-wheel drive, operating headlight, Performs best on 11.25" radius curves or greater.


Prototype Description: The PCC (Presidentsâ Conference Committee) is a streetcar (tram) design that was first built in the United States in the 1930s. The design proved successful in its native country, and after World War II it was licensed for use elsewhere in the world. The PCC car has proved to be a long-lasting icon of streetcar design, and PCC cars are still in service around the world.

PCC cars were initially built in the United States by the St. Louis Car Company (SLCCo) and Pullman Standard. Clark Equipment built the only aluminum-body PCC as well as all narrow gauge B1 trucks for Los Angeles, all the standard and broad gauge B2 trucks both air- and all-electric, and the B2B trucks used under PRCo 1725â1799 and Toronto 4500â4549. SLCCo built all B3 trucks, both standard and broad gauge. PCC cars for Canadian cities were assembled in Montreal, Quebec by Canadian Car and Foundry from bodies and trucks supplied by St. Louis Car.


Road Name History: The PE was started as an independent road, in 1911 the SP acquired a controlling interest, and operated the a freight side until 1964.