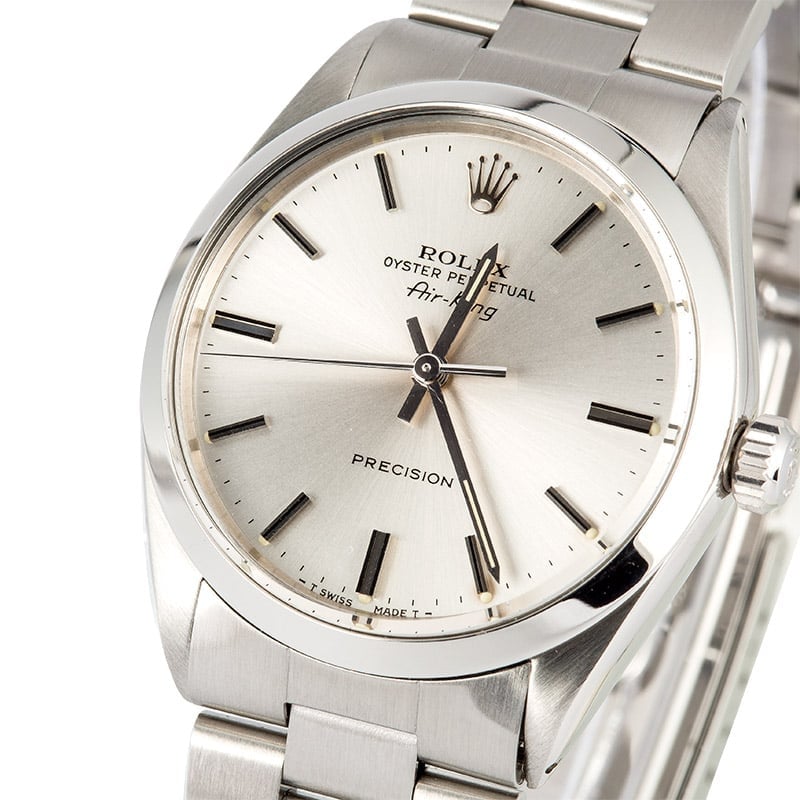 
Notes: In 1957, Rolex released the stainless steel Air-King ref. 5500 with a 34mm case and time-only functionality. Their clean and straightforward dials were clearly marked with the âAir-Kingâ name under the Rolex logo at 12 oâclock. On the bottom part of the dial, the Air-King ref. 5500 also included either a âPRECISIONâ or a âSUPER PRECISIONâ label depending on the caliber it ran on. The âPRECISIONâ text signifies Caliber 1520 within the case while âSUPER PRECISIONâ indicates the presence of Caliber 1530.

In 1963, in a curious and extremely un-Rolex-like move, the Cal. 1530 started its own process of being phased out. Rolex replaced it by the less advanced Cal. 1520. As the numbers suggest, it represented something of a backwards step for the usually progressive thinking company.

It was centered on the same architecture as the Cal. 1530, and shared an identical base plate. However, it had several key differences, many of which were designed to keep its manufacturing costs to a minimum.

Rolex only produced it with a stick regulator, rather than with the Microstella system that had found its way onto the departing 1530 by the end of its run. The Breguet overcoil of the majority of Rolexâs output was substituted for a traditional flat hairspring, and it was originally released as a 17-jewel movement, although 25 and 26-jewel versions joined the range later in the production cycle.


Family Notes: The Rolex Air-King history dates back to 1945. During this time, the Rolex Oyster Perpetual was becoming increasingly popular among combat pilots for its durable case and easy-to-read dial. Hans Wilsdorf appreciated the fact that many brave pilots opted for a Rolex timepiece and chose to honor their loyalty with the addition of the Rolex "Air Series", which also included the iconic Air-King